The Purge #2: Jurassic Park III vs. Terminator 3: Rise of the Machines 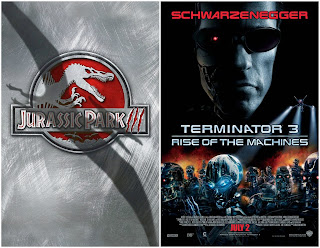 It’s killer dinosaurs vs. killer robots as Rob is forced to choose between two ill-advised sequels.

Last time on The Purge, you voted to send Away We Go off into that good night, and I couldn’t agree more. But our noble work continues. We must rid our DVD shelves of the middling and the unworthy, the stuff your roommate left behind and the disappointing Blind Buys. When the movie gods judge your collection, how will they find you? Will you stare into the Face of Rahn with confidence or beg forgiveness from the Pope of Film? Now, the one-off middlebrow stuff is easy enough to compare in a vacuum, but how do we handle franchises? Let’s switch it up this week and look at second sequels to beloved action/adventure films:

“Some of the worst things imaginable have been done with the best intentions.” 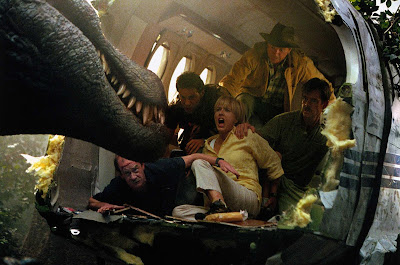 You never forget your first time on a Wild Dinosaur Murder Island. Dr. Alan Grant (Sam Neil) certainly hasn’t, which is why he tells Paul and Amanda Kirby (William H. Macy and Téa Leoni) to go screw when they ask him to lead a guided aerial tour of Isla Sorna. However, because Grant chose to pursue the life of a scientist, making important new discoveries and helping people learn about the world around them, he’s fucking broke. The Kirbys write Grant an obscene check that gives him no choice but to grab his intern Billy (Alessandro Nivola) and board a private jet to the Second Best Exotic Dinosaur Murder Island. Ironically enough, he’s really into it at first. He’s marveling at the beauty of these majestic creatures and eager to share his expertise with people who might genuinely appreciate it. None of those people are on this plane, though, as Grant soon discovers that the Kirbys are actually a divorced couple searching for their son Eric (Trevor Morgan), who recently went missing nearby. Also, that check they wrote is worthless and a mechanical mishap has left them all stranded on the Island of Dinosaurs Who Murder. The search for Eric (complete with murdering dinosaur hijinks) ensues.

Jurassic Park III has all the classic trappings of a second sequel: the production values are low, elements are safely rehashed from the original, and the lead actors who refused to show up for Part 2 return to cash a paycheck. That being said, the film works hard to present a Dr. Grant whose experiences in Jurassic Park have left him in a different place in his life than when we first met him. While he still argues for slow and meticulous science in the face of quick and easy genetic manipulation, he’s now more hardened and cynical, which is decent enough character work for our purposes. The Kirbys’ search for their son works, too. If we have to return to the “rescue someone from the island” plot, we might as well do it through the eyes of some middle-class normal types who just got caught up in the chaos John Hammond hath wrought. Jurassic Park III’s premise isn’t to blame, here. Neither is the acting: Neil, Macy, and Leoni are all capital-F Fine and play what they’re given absolutely straight. Hell, even the “talking raptor” plot line isn’t the worst thing ever. It gives Grant something to investigate during his time on the island and creates an evolutionary through-line with the series overall. The longer the dinosaurs are left alone, the more they learn and grow. Science! 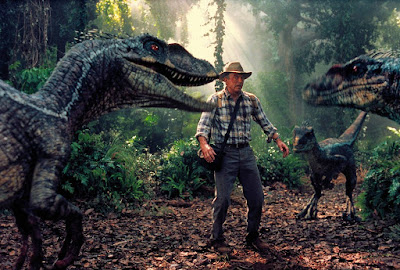 The problem is that Jurassic Park III is a glorified TV movie. The cinematography is flat and boring, the CGI is cheap and uninspired, and the set pieces are total garbage. There’s little regard to pacing or suspense; characters often just turn around to find Tyrannosaurus Rexes lumbering by on their way to murdering other dinosaurs. Most of the action scenes take place in full daylight, leaving the CGI and puppet effects even more weightless and cartoonish. The river and pterodactyl attacks are kind of neat, but Johnston lacks either the style or the budget necessary to make them land in any meaningful dramatic way. Nor does the film care about character arcs or causality. These people are all hapless dingbats who argue about raptor eggs for an hour while an offscreen Laura Dern scrambles to rescue their sorry asses. The aforementioned Good Enough Premise is completely abandoned about midway through in favor of absolutely nothing at all. The film just gives up and ends at one point, and we’re all expected to clap and say thank you.

“Our destiny was never to stop Judgment Day. It was merely to survive it together.” 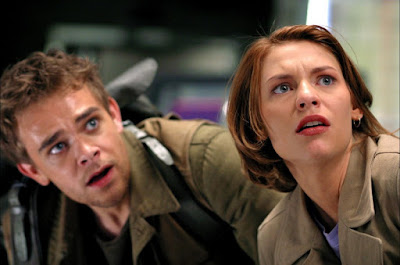 What’s a soldier without the war? What do we do after our life’s work is finished? Ten years ago, with the help of his mother and a socially-awkward but well-meaning BFT, John Connor (Nick Stahl) stopped Judgment Day. The machines never took over. The nukes never launched. This is great for humanity, but really bad for John. In the years since his mother’s death, he’s drifted from one dead end to another, never fulfilling his destiny nor quite believing that the cyborgs haunting his dreams have been put down for good. Spoilers: they haven’t. While drunkenly raiding a veterinary hospital administered by his ex Kate Brewster (Claire Danes), he runs head-first into the T-X (Kristanna Loken), Skynet’s latest killer creation. This time, the Super Omnipotent Network of Murdering Robots is not only hunting John, but his future lieutenants as well. Thankfully, a T-850 (Arnold Schwarzenegger) arrives just in time to guide the wayward pair toward their destiny as First Couple of the Resistance. Turns out John and Kate have a post-apocalyptic future together and Judgment Day is inevitable.

Rise of the Machines is essentially Judgment Day updated for the millennium: the Cold War is over, Skynet lives in the internet, and the new Terminator is a progressive-yet-test-audience-approved white lady. She’s the kind of super weapon that kids designed in crayon after seeing T2 in 1991, a mix of the T-800 and the T-1000 with a little sexy thrown in for good measure. Arnold is old, but still spry enough to deliver robotic exposition and fire large-caliber weaponry. The film itself is fast-paced and tightly-edited; there’s almost no time for bullshit or breathing room. Stahl and Danes do the pouty-eyed dramatic thing that pretty actors do, shouting and pointing with concern at things offscreen. While their chemistry isn’t exactly the best, their relationship does add a wrinkle to the Terminator mythology that pushes the canon forward without compromising the integrity of anything that came before. Exploring how and why John Connor dies is genuinely interesting and provides a decent enough excuse to corrupt the original film’s stable time loop for the second time. Things end on a dour and bittersweet note that resets the franchise for future installments. 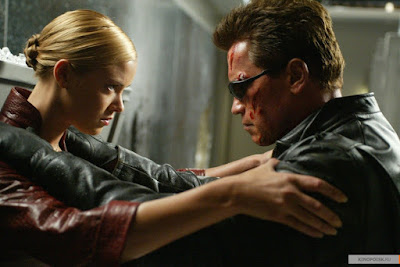 These should all be good things, but Terminator 3 also lacks the dramatic weight and sociological subtext of its predecessors. It’s much more interested in being an action film than a political allegory, but the mid-level CGI and flat staging leave everything feeling hokey and inconsequential anyway. Arnold’s T-850 has absolutely no arc or significant efficacy; he’s just there because someone has to punch Kristanna Loken. John and Kate literally run, jump, and fly toward the climax of the film without any real challenges. There are no personal conflicts to overcome or thresholds to cross. The hunt for John’s lieutenants goes nowhere and means nothing. Attempts at humor are cheap and strange, reading like Zucker brothers parody: “What if Arnold get his clothes from a stripper this time?” “What if he got kicked in the balls?” “What if he put on goofy sunglasses and told a gas station clerk to ‘talk to the hand’? That’s relevant!” They’re all sad and embarrassing and we should do our best to just forget them. Still, the film’s worst offense is that, unlike its predecessors, it has nothing real to say about the world or the people who inhabit it. It’s as if T3 was designed to remind modern audiences what the Terminator franchise is all about without making them suffer through those boring and complicated “talking” parts.

Pre-verdict note: In order to compensate for my own bias and get a sense of general opinion, I polled a few of my nearest and dearest on this one. Jurassic Park III won overwhelmingly, with 71% of the vote. It’s really the lesser of two evils in this case. Neither film has any real re-watch value, so it’s coming down to which has the most interesting moments. While Jurassic Park III could easily win for “English-speaking raptor hallucination” alone, I’m going with Terminator 3: Rise of the Machines. It’s more of a cynical retread than JP III, but it chugs along at a decent pace, has a few semi-iconic shots, and sports an ambitious and unexpected ending. Not to mention that the DVD comes with a feature-length commentary from Arnold Schwarzenegger. If you’ve never listened to a feature-length commentary from Arnold Schwarzenegger before, you are doing it wrong. But let’s fight this out, F-Heads. Leave your thoughts in the comments below.
Posted by Patrick Bromley at 5:00 AM