Heath Holland On...Flight of the Navigator

If you’re of my generation, there’s probably no escaping the impact of Flight of the Navigator. This little science fiction film, distributed by Disney in 1986, has gained bona fide cult status over the last decade or so and come to be championed by many movie fans that grew up during the 1980s. Looking back on it now as the film turned thirty just a few weeks ago, it’s easy to see what makes the story so appealing and stand the test of time, despite the connections that will forever tie it to 1986.

Flight of the Navigator follows David, an average 12-year-old boy played by Joey Cramer, not to be confused with Aerosmith drummer Joey Kramer. David lives in Ft. Lauderdale, Florida with his parents, his little brother Jeff, and his dog. One night, David falls down a hill and wakes up only to discover that eight years have passed; eight years in which he has not grown a day older, but everyone else around him has. It turns out he’s been missing and declared legally dead by the state, and everyone who ever knew him or loved him had moved on. His reappearance fills everyone with questions, including NASA, who suspects that there may be something alien about his disappearance. Their suspicions turn out to not be entirely unfounded when David is summoned by a mysterious spaceship to be its navigator. What follows is an adventure of a lifetime, but can David ever get back the eight years that he’s lost and just be a regular kid again? 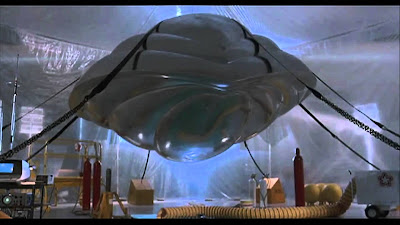 Though the special effects are a bit dated after thirty years, they were cutting edge when this movie was first released. Every kid I knew dreamed about being the navigator of their own spaceship, and this movie succeeds in some of the best ship design this side of Star Wars. In fact, what makes the ship in this movie so cool is that it was completely smooth and shiny, which is in contrast to the Millennium Falcon and the other ships of Star Wars, which were blocky and weathered. One of the many reasons George Lucas originally shied away from shiny, smooth ships in his space opera was that the special effects weren’t in a place where he could competently film metallic, orb-like space ships without fear of the camera and everything else in the room being reflected, exposing how the magic is achieved to eagle-eyed audiences. By 1986, computer technology was in a place where we could get a ship like the one seen in Flight of the Navigator. This film uses animation and some practical modeling, but it also appears to use the same early liquid-metal computer imagery that James Cameron would utilize on The Abyss a few yeas later. What this movie loses by using several obvious practical puppets (wires visible) as aliens has been made up for by outstanding ship effects which brings the alien vessel to life.

The story itself still holds up after all these years, and I think part of the reason why is because it puts a kid in genuine peril. That’s an element that has been overlooked in the last twenty years or so and that movies aimed at a younger audience seem to have lost. We kids who grew up in the eighties had loads of movies that weren’t afraid to show kids in really dangerous situations. When the threat is low, kids are aware that no harm is going to come to the characters on screen. But when you put a kid in a situation where the character on screen could be hurt or even killed if things don’t work out, kids are bound to tap into that and sit at attention. This is something that a lot of remakes of eighties classics don’t seem to understand, and what makes them less than they could be. My daughter recently watched the Disney Channel remake of Adventures in Babysitting, which she thought was okay, and then the original Chris Columbus film from 1987 starring Elizabeth Shue. She preferred the original because the stakes are higher and there’s a real threat of danger to the characters. Flight of the Navigator takes it even further by manifesting just about every fear a kid could have. David ends up being separated from his family not just physically or by distance, but also by a gap of lost time that he doesn’t know if he can ever get back. What could be more frightening to a child than being taken from the security of his family? To get knocked out and wake up to discover that everyone he cares about is now eight years older and time has moved on without him? 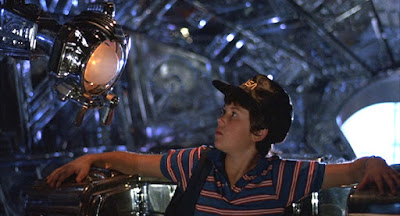 This material is brought to life by a fantastic cast, most prominently led by Paul Reubens (under the pseudonym “Paul Mall”) as the voice of the ship. Though heavily processed and pitched down, the man who was and is Pee Wee Herman is still recognizable. The ship’s “personality” starts out very alien and clinical before it becomes more human and child-like (not unlike John Connor’s T-800 in Terminator 2), complete with bad jokes and goofy behavior. Yeah, it’s corny, but it’s supposed to be, and this humor serves as the device that allows us to start to have fun with this movie and stop being so worried about David’s awful predicament. David’s parents are played by Cliff De Young (Glory and The Craft) and Veronica Cartwright (Hitchcock’s The Birds and a little movie called Alien). The younger version of his little brother is played by a kid named Albie Whitaker in his only screen role, and the older version is played by Matt Adler, who is now a voice actor. We also get a notable performance from Sarah Jessica Parker fresh off of her TV show Square Pegs and her appearance in Footloose. She plays a teenage girl working at NASA who befriends David while scientists in lab coats try to figure out what’s going on. Running the NASA investigation is Dr. Johnny Fever himself, WKRP in Cincinnati actor Howard Hesseman. He’s not necessarily a bad guy, but he seems less concerned with David’s well-being than he is in learning the secrets inside the boy’s head.

Flight of the Navigator is directed by Randal Kleiser, who also helmed Grease and later directed Paul Reubens a second time in Big Top Pee Wee. His direction feels tight even though the film has lots of time to breathe, and the performances he coaxes from his actors feel real. The FANTASTIC synth score from Alan Silvestri, just one year after his work on Back to the Future, is one of my favorites. Though I still revisit this movie from time to time, the music has been engrained in my head since I was a kid. The Academy-Award-nominated composer’s score is almost entirely synthesizer-based and feels very spacey and out of this world, directly tied to our vision of the future as it stood in the late 1970s and 1980s. It shares qualities with the score work of John Carpenter and even the latest synth-score smash hit Stranger Things. Silvestri also throws in a few keyboard-based pop numbers during transitional scenes that sound like they could have been the alternate theme song for Miami Vice. All this, plus Flight of the Navigator has one of the best uses of a Beach Boys song in a film EVER. 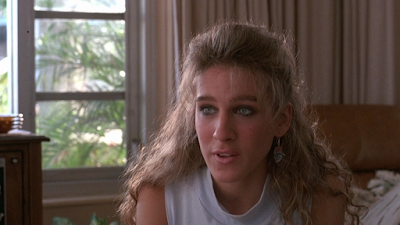 Disney enthusiasts might be surprised to learn that Flight of the Navigator wasn’t written or conceived by Disney but was instead pitched to them for production in 1984 and rejected. The film was ultimately financed by an American independent film company called PSO and a Norwegian production company called Viking Film. Disney CEO Michael Eisner later agreed that Disney would distribute the film in America, domestically bringing it under the Disney umbrella and raising its profile. This is why there is moderate profanity in the film, which wasn’t considered acceptable before Eisner’s tenure. Now this movie has been completely absorbed as a Disney classic by both fans and the company itself, even though Disney didn’t technically “make” the movie. One of the shells of the spaceship that was used during filming sat for years in a boneyard on the backlot tour of Disney’s MGM Studios before the area was closed for good, and another shell was painted red and gray and currently resides atop a refreshment kiosk in Tomorrowland at The Magic Kingdom. Millions of guests walk by it every single year without realizing they’re strolling past the ship from Flight of the Navigator.

Time has been kind to this movie. Thanks to a new generation of kids that is highly influenced by 1980s (I live with one of them) and who--in lieu of their own culture--has co-opted ours, new people are discovering the movie each year. When it comes to movies like this, there seems to be a sort of “irony cycle” around them. We unapologetically loved movies like this when we were kids. We got older and decided that they were goofy and quaint (“The soundtrack was done on a KEYBOARD, OMG”) and start to look back on things we once loved with ironic distance because not doing so would require emotional vulnerability. We create a gap between us and the thing we used to love because we feel like we’ve somehow outgrown these things. Luckily, many of us eventually revisit these films as adults and discover that many of them have solid stories, tight plotting, and a quality that is lacking from much of today’s entertainment: whimsy. Irony is ultimately exhausting. It’s so much easier to embrace movies like this one with our defenses lowered and accept them on their terms, not ours. 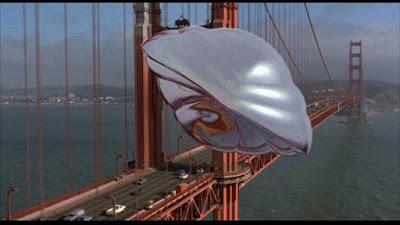 The influence of Flight of the Navigator can be seen occasionally in movies today, notably last year’s ambitious failure from Brad Bird, Tommorowland. Unfortunately, the actor who played David, Joey Cramer, was recently arrested for some illegalities, but that got a lot of people talking about this movie again, many of them expressing how much they loved this movie as kids and needed to revisit it. There are t-shirts popping up in tribute to Flight of the Navigator on boutique sites, and the DVD has become a mainstay in Disney’s bargain classics line, cheaply available for years. There’s even an international region-free Blu-ray that has sold very well and is widely available. There’s also been talk of a modern-day remake with a big budget. I hope that this never happens; there’s something about the original that represents an innocence and an optimism of its time. It’s a part of many of us who were there and who have showed this to our kids in an attempt to pass on the adventure, and I can’t imagine a remake ever being able to live up to the wonderful qualities of the original. Yeah, the clothes look a little bit dated, the music is definitely a product of its time, and the story doesn’t rush to get to the action. But these reasons that once made the film feel dated are all part of the charm now that retro is cool again. At thirty, Flight of the Navigator is still as weird and scary and funny and unique as it was in 1986.