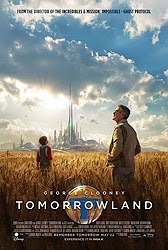 Despite being technically impressive, Tomorrowland is a major disappointment from writer-director Brad Bird (The Iron Giant, The Incredibles, Ratatouille, Mission:Impossible: Ghost Protocol). This is surprising. Bird has become a household name in recent years to movie fans, an auteur whose work has become synonymous with strong characters and rich emotion. Tomorrowland is a big step backwards from his previous output. I feel fans of his movies will be majorly grumpy after seeing his latest.

Tomorrowland is not a terrible movie, but it’s the kind of movie that can leave you feeling angry, even more so than you do with a terrible movie. It’s because it’s so profoundly deflating. The problems in the film are obvious as you are watching it (they don’t sneak up on you after the viewing) and the movie gives off this vibe that something is "off" for the majority of its runtime. Ever notice how the movies we pick apart the most are the ones that let us down and not the ones that are just outright dogs? 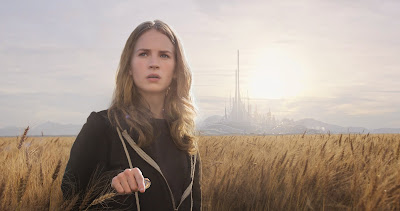 The plot in brief: An optimistic teenager (Britt Robertson) and a former boy-genius inventor (George Clooney) embark on an adventure to unearth the secrets of “Tomorrowland,” a mysterious place somewhere in time and space.

Before I go back into what doesn’t work about Tomorrowland, let me point out some positives. The movie features a very appealing lead character named Casey (Robertson) who is smart, energetic and funny. She is at the center of all of the best sequences in the movie, including when she first uses the Tomorrowland pin, when she initially visits Tomorrowland and a sequence in an awesome-looking sci-fi nostalgia store (which is full of visual nods to other Bird properties like The Iron Giant and The Incredibles as well as Star Wars -- another Disney brand). The problem is all of these scenes are in the first 45 minutes.

The movie is thematically rich and its intentions are good. It’s creative and has tremendous production design (this is a great looking bad movie) which should be commended. It definitely has an authorial voice (in Bird and co-writer Damon Lindelof) and is audacious in its own way. Tomorrowland is sort of a commentary on popular teen/family tentpole entertainment in the same way The Cabin in the Woods was for horror movies. In short, the movie is original, trying to do something new and has something worthwhile to say. And yet it still doesn’t work. That just shows you how bad the story is in Tomorrowland. It’s kind of a miracle. 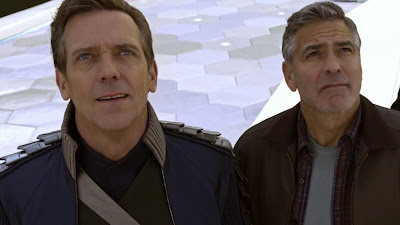 After a fun, adventurous first act, the energy is just zapped out of this thing for the next badly paced 90 minutes. Tomorrowland is so unevenly structured that the story doesn’t even kick in until nearly the third act; they’re still in set-up mode before that. It grows tedious and meandering as I just sat there waiting for the story to kick in already. Characters I was once invested in turned into nothing and I no longer cared any more what happened to them. It bugged me so much how they took a decent movie in the early going and turned it into a series of dry lectures akin to The Matrix Reloaded’s architect and Zion scenes. Watching Tomorrowland is like sitting through a boring conference in a beautiful city where the hosts won’t let you go outside. At least there was a rave in that second Matrix movie. Plus, climax of Tomorrowland is lazy and stupid and don’t get me started with the denouement. I half expected George Clooney to start singing “I believe the children are our future. Teach them well and let them lead the way.”

This is a movie much more about its themes than its narrative and that proves to be its downfall. It bends over backwards to be about how we need (as a society or entertainment industry or both) to be putting out positive messages and hope in order to “save the world” as opposed to a dystopian or doomsday point of view. The movie is anti-gritty and against the current trends prevalent in YA filmmaking (like Divergent, The Hunger Games, The Maze Runner) that are all showing worlds that are bleak and miserable. It’s an interesting point of view that I can’t agree with. Here’s why. Something dystopian like Mad Max: Fury Road can be fun and make you happy and something basking in bright colors and positivity like Tomorrowland can be suffocating and drab and make you unhappy despite it wanting to do the opposite. More importantly, they don’t present these ideas in ways that are engaging or even cinematic. It’s just people talking in an expensive room while FUCKING TOMORROWLAND is outside. The themes of this movie could work as subtext but as text they’re annoying and a bore. It’s all about the execution and not the intention. 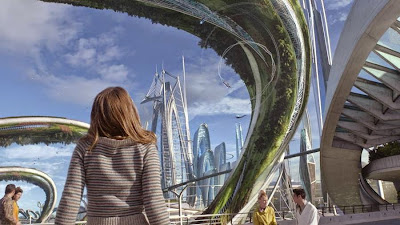 Besides the strong work from Britt Robertson, the rest of the performances vary. Raffey Cassidy plays Athena, a character who majorly factors into the plot, and she’s good but in an over-polished child actor kind of way. Hugh Laurie is basically just playing Mr. Smith from The Matrix, and as for George Clooney, well, he’s miscast. This is the type of role a younger Harrison Ford or Sean Connery could have killed in. The actor playing the inventor needed to be more classically grumpy. Clooney is not that guy, and Tomorrowland takes little advantage of what makes him charismatic as an actor in movies like Ocean’s Eleven or Michael Clayton. There he’s the coolest guy in the room and here he’s a whiny stick in the mud that might still be in love with a 10-year old girl despite being an adult man. It’s creepy.

It seems like Bird and Lindelof were given carte-blanche to make their movie and somehow lost their feeling for telling a satisfying story along the way. I suspect it would be more satisfying to watch an interview with Bird and listen to him talk about making Tomorrowland than it would be to watch it. This is a one-time watch that completely surrenders its appeal when the mystery (which isn’t much of a mystery) is revealed. I really wanted to like this movie and I really did not. It breaks my heart to say this, but I think you’re better off skipping this movie and letting the idea of Tomorrowland live on in your head. The reality is worse than the fantasy. Better yet, just re-watch Adventureland. That movie is awesome!
Posted by Patrick Bromley at 5:00 AM