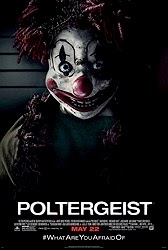 When people complain about soulless, pointless horror movie remakes, movies like Poltergeist are what they are talking about.

Why does this new Poltergeist exist?

This is the question we always ask ourselves when a really good horror movie -- one that still holds up and doesn't need 'updating' -- is remade. We know the cynical answer is to cash in on an IP and make a bunch more money. I know that. But I also like to think that someone somewhere involved with the project at some point will ask him or herself the "Why?" of making something again. Is there a new take on the material? A way of modernizing what has now become outdated? Even the old standby "we're going back and really making the book/graphic novel/board game" is at least some sort of rationale, even if it almost always turns out to be a bogus line.

But with something like this new remake of Poltergeist from screenwriter David Lindsay-Abaire (the demon previously responsible for Oz the Great and Powerful) and Monster House director Gil Kenan, it doesn't seem like anyone considered the "why" beyond "because young people might not watch a movie from 1982." This is a remake that plays exactly like a bad cover version of a song you love -- a pale imitation that's too close to the original to have its own identity but not succeeding in any of the ways the original succeeds. It's Poltergeist, only worse. 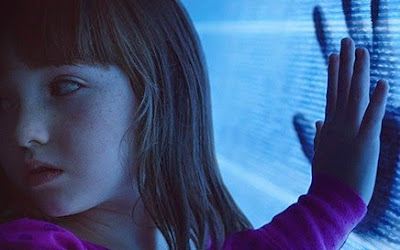 You probably know the story by now. The Bowen family (formerly the Freelings), consisting of dad Eric (Sam Rockwell), mom Amy (Rosemarie DeWitt), bratty teenage daughter Kendra (Saxon Sharbino), sensitive son Griffin (Kyle Catlett) and youngest daughter Madison (Kennedi Clements), move into a small suburban development. Weird things start happening. Voices in the TV begin speaking to Madison. One night she disappears, taken away by angry spirits to a kind of limbo between this world and the next. To get her back, the Bowens enlist the help of paranormal investigator Brooke Powell (Jane Adams) and reality TV ghost hunter Carrigan Burke (Jared Harris).

The basic beats of the plot are the same. The exact same, really. All that has been changed are a few details, like turning medium Zelda Rubinstein into a male reality TV star who uses the hashtag #ThisHouseisClean. That's the movie's idea of "updating" Poltergeist. It is, to put it bluntly, fucking stupid. I'm sure Lindsay-Abaire thought he was making the material more contemporary with this little addition, just the way I'm sure the writers of the Fright Night remake thought it was clever to make Peter Vincent a Criss Angel-style Vegas magician. What it really smacks of is this new Poltergeist's insane need to contextualize and explain every element. See, we know Burke is a ghost hunter because he's introduced on the TV in the first act. Never mind the fact that this isn't even what makes the Bowens think of hiring him -- that would at least be competent writing. No, it's not their idea to call him. He has a connection with another character, and it's that person's idea to bring him aboard. This means we could know nothing about him until that person says "I know a guy..." or something like that. But no, this new Poltergeist is too in love with its reality TV references and hashtags -- hashtags with, incidentally, do nothing but remind us of that other, better Poltergeist.

The terrible exposition stuff doesn't end there. Why are the electronic devices being affected by the ghosts? Because there are power lines nearby! Power lines which are shown on screen many times and are even mentioned by a character at one point. The reveal that the house was built on a cemetery with the bodies still in place? Gone. That exchange is literally thrown away through dialogue over a dinner party. A DINNER PARTY. This movie can't wait to explain everything to us, but also can't come up with a single interesting or visual way to do it. There's also a tossed off line in that scene from a character who says "At least it wasn't some ancient tribal burial ground" or something like that, and then everyone has a laugh at the expense of the '82 Poltergeist because haha wasn't that stupid and aren't we so much better? Tip to the directors of these remakes: stop with the cutesy references to the original films. Most often, they only serve to remind us that we would rather be watching those versions. That's definitely the case here. 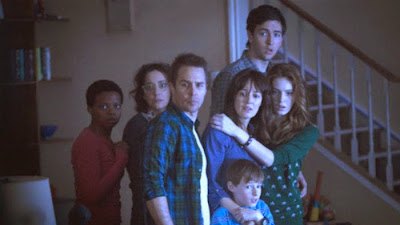 There are other moments designed to remind us that "this ain't your parents' Poltergeist!" Instead of opening with that great shot pulling back from the TV screen, this one opens by pulling back from a tablet playing a video game. See? Progress! Except the opening shot in the '82 film actually meant something. The original Poltergeist is, at least in part, about the way that television had forced its way into our suburban homes (though I don't think Steven Spielberg has an anti-TV agenda, there's a reason for that final image). This new Poltergeist isn't about anything.

The original Poltergeist saw a character disappear on a rescue mission that we couldn't see. It created suspense. This new version shows us everything through the wonder of a drone with a camera and CGI. Progress! Also, it's a different character that goes on the rescue mission, because the new film seems to be about young son Griffin instead of the parents. Tobe Hooper's film was JoBeth Williams' story, because it was a movie about a suburban nuclear family being pulled apart but finding its way back together and the lengths to which a mother will go to protect her children. The new Poltergeist is about a kid who's scared of everything and is rewarded by being exposed to the scariest stuff imaginable.

Except Poltergeist 2015 is not scary. Ever. It barely even tries. The movie that came out 33 years ago, done with all opticals and practical effects and rated PG, is 10 times edgier and more intense than this limp piece of computer-created product. Much of the marketing has been built around the clown doll that terrorizes Griffin, because many of us who grew up the original film still point to the clown scene as something traumatizing. The only "scare" -- it's one jump -- is given away in all the movie's marketing. And did I mention that instead of there being one clown doll that the son already owns -- you know, the fears of your own beloved playthings turning against you being real and all -- it's a random clown that was left in the house by the previous owner? Actually, it's a whole box of clown dolls! Because this Poltergeist is going bigger! Sam Rockwell even says "Who leaves a whole box of clown dolls around?" NO ONE. That's just a dumb thing you put in your movie to be different, filmmakers. The many references to the first film feel obligatory, nothing else. The pool skeleton shows up but is mishandled (it's not in a pool) and feels like an afterthought. Even the most disturbing image from the original -- the guy peeling his face off in the bathroom -- is done completely wrong here. And it's done as a reference to Poltergeist II, because no one can get anything right. 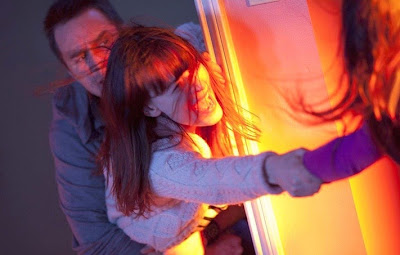 What the movie does have going for it is an insanely overqualified cast. Rockwell and DeWitt do so much to create a real lived-in relationship, and while it never achieves the ease and naturalism of JoBeth Williams and Craig T. Nelson, that's not their fault but that of the script. Like so much of the movie, it's too busy introducing exposition to explain away things we once accepted. There's all this stuff about Rockwell being out of work (why else not move as soon as the weird stuff starts? I mean, besides the fact that it appears to take place in a matter of days) and splurging on expensive gifts that he can't afford, which is never resolved except that one of the gifts is a drone that factors heavily into the movie's climax. Both Jane Adams and Jared Harris are better actors than their roles require, but they help elevate the material just by being part of it. Without the cast assembled for this remake, the thing really would completely fold in on itself faster than the Freeling house.

Gil Kenan's direction is competent enough, and both he and cinematographer Javier Aguirresarobe do their best to give the movie a widescreen '80s feel -- which once again begs the question: why not just watch the original, which was shot in widescreen in the actual '80s? Marc Streitenfeld contributes a nostalgic score. The technical merits are there, but it's all hollow. Kenan approaches the movie as a for-hire director; there's none of the personality, inventiveness or energy he displayed in his animated feature Monster House -- a much better haunted house movie than Poltergeist, by the way.

Horror remakes aren't going away anytime soon. That's a fact of the movie business. We can only hope that future remakes are more inspired than this one, or that they take chances with the material and at least try to carve out their own space (say what you will about Rob Zombie's Halloween; it's a very different movie from John Carpenter's until it is the exact same movie as John Carpenter's). Save some shiny toys and some self conscious dialogue, this one refuses to be its own thing and squanders one of the best casts in a studio horror movie in a long time. It doesn't take anything away from the original Poltergeist (a movie with which I have a complicated relationship because of the effect it had on my beloved Tobe Hooper's career). That still exists and can be taken off the shelf and watched just as easily as it could before a single frame of this lame remake was ever shot. In fact, the failings of this new version only put the greatness of the '82 Poltergeist into sharper relief. More than ever I am aware of all the things that movie does right now that I've seen another movie do them all wrong.
Posted by Patrick Bromley at 12:00 PM