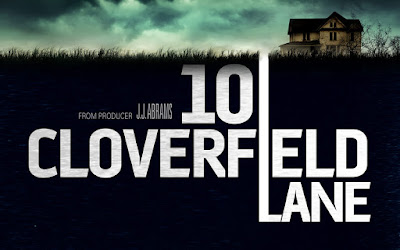 “After I've saved you and kept you safe, this is how you repay me?”

For most of us, home is more of an abstract and idealistic concept than a geographical location. Home is our place of rest, the place for which we feel the most tenderness and love. It’s where we recharge our batteries and make many of our best memories. But home can also be toxic. It can be corrupted by abuse and neglect. Happy homes can become prison cells. In many ways, Dan Trachtenberg’s 10 Cloverfield Lane is an allegory for domestic abuse both physical and emotional. It’s a look at the way assumed debts and unsolicited generosity can trap people in relationships and override their sense of personal agency. It’s about the way an abuser can expertly walk the line between good and evil, giving the victim a false sense of security while slowly chipping away at what used to make them human. There are monsters in 10 Cloverfield Lane, but they’re not all scales and teeth. They’re also the internal demons we face when we decide to make a better life for ourselves, to recognize a bad situation for what it is and be willing to pay the ultimate cost to make it right. 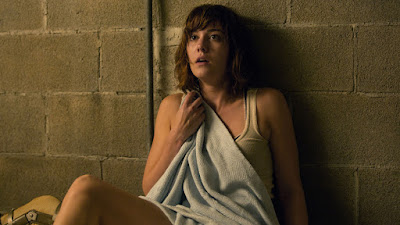 Michelle (Mary Elizabeth Winstead) is your everyday all-American girl fleeing her impending nuptials in a blind panic. She packs a bag, leaves the ring, and heads out on the open road. Her freedom is short-lived, though, as she only makes it a few miles before her car is catapulted into a guardrail by an unseen force. She wakes up in a bizarre room furnished by a bizarre man with a bizarre fixation on doomsday prepping. This is Howard (John Goodman), and all he wants from Michelle is her thanks for saving her life. Well, that and her complete surrender to his company and solemn promise to never leave. That won’t be hard, he tells her, because it won’t be safe to leave the bunker for a long time. He says some kind of attack has made surface life impossible. The only way to survive is to stay down here with him. But hell, it’s not so bad: she’s got TV, a full kitchen, and only the smallest of suspicions that Howard is a psychopath. He seems right about the attack, though, which leaves Michelle and Emmett (John Gallagher, Jr.) no choice but to get comfortable. But the more they learn about their host, the more they think that braving the apocalypse might be the better option.

Michelle’s failed engagement feels like a basic narrative conceit at first, just a low-stakes way to get her in the car and on the road. But once we get a feel for the bunker and its owner, it becomes clear that she’s traded one claustrophobic domestic deathtrap for another. The place is plush and cozy; it wouldn’t be surprising if Howard was living down here before the attack. Regardless, it’s more than enough to provide the kind of nuclear stability that he craves and Michelle rebels against. We learn later that she’s made a habit of running away from the big problems, which, when combined with the opening scene, makes it seem as though this is the exact situation she was trying to avoid in the first place. Some facet of her relationship was choking and constricting her, and now she’s trapped underground with nothing but board games and old magazines. Now she’s trapped with a wacky redneck brother and a creepy dad who won’t even cut the umbilical long enough to let her go pee. She doesn’t just spend the entire first act coming up with new ways to escape because she’s a badass; she’s also following an internal instinct to resist this kind of familial dynamic. 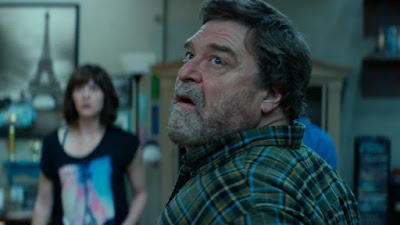 Of course, what we’re really tracking are Howard’s obsessions, most of all his need to replace the daughter that was taken from him. We realize that the bunker is as much about keeping his companions in as it is keeping the rest of the world out, which is understandable. He might just be a lonely and old-fashioned guy hurt by his family’s betrayal. But again, there’s something more. There’s no talking at the table. No one is to ask any questions. He tells Michelle that she’ll “learn to love cooking” and feels insulted when she touches Emmett. She’s expected to behave herself and meet him where he wants to be met. The line between daughter and lover is purposely fluid, it seems, and Michelle is right to be terrified. The problem is that Howard really does have his shit together. He’s a veteran. He’s prepared. He sticks to his principles. There’s a great moment while she’s stitching his head wound in which we actually start to sympathize with him. She’s exhausted every opportunity to escape and really tested his credibility, and he’s mostly checked out. For the briefest of moments, Howard seems like the kind of father figure any of us would be lucky to have.

But again, he’s walking a thin line between affection and exploitation. The film draws clear parallels with the real-life emotional torment people face in abusive relationships. At one point, the air filtration system dies and Michelle is forced to crawl into the ducts and sort things out before they all suffocate. It’s such great symbolism, so evocative of the way people sometimes feel trapped in their own homes. Howard celebrates their success by playing “Tell Him” by The Exciters: “Tell him that you’re never gonna leave him. Tell him that you’re always gonna love him.” In light of the bloody evidence Michelle has just found, the song provokes a sense of sinking dread and makes Howard’s genuine elation all the more frightening. He was afraid to lose Michelle like he lost the others, but now he’s back in control. She’s his little girl again (think of the charades scene). Her suspicions are confirmed near the end of the film, when he discovers the biohazard suit she made for her escape. Note how patient he is with their bumbling excuses until Emmett says he wanted Michelle’s respect. Note how dead Emmett suddenly becomes after that.

From there, the walls begin closing in on Michelle. Howard is overjoyed that they can finally be alone because this is how things were always meant to be. He presents himself to her dressed-up and clean-shaven (an absolutely terrifying moment that is never commented on. Like the best horror, less is more), but she decides not to find out what that means for her. She turns his barrel of flesh-eating acid against him and exposes the monster living inside before donning the biohazard suit and breaking the airlock out into the world. Again, the film is drawing a parallel with abusive relationships and the monumental fortitude that a victim has to show in order to get out of the house. Of course, Howard was right: the world is scary. There are monsters. There are dangers. It will take incredible strength for Michelle to face them. But that doesn’t mean Howard isn’t awful. That doesn’t mean Michelle should have to be trapped by his generosity or that he has a license to behave the way he does. “You don’t know what’s out there! Stay with me!” he screams as she climbs the ladder to freedom. That may be true, but it has to be better than this.