Off the Shelf: Bubba The Redneck Werewolf (DVD) 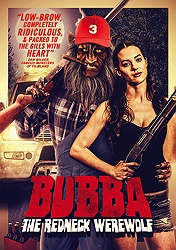 Like 2014's Wolfcop, Bubba the Redneck Werewolf is the kind of horror comedy that comes prefabricated as a midnight cult movie for people who find the title hilarious in and of itself. And while the intentions of both films may seem cynical on the surface -- a low-budget effort pitched at hipsters who can pat themselves on the back for watching something so goofy and outrageous -- both films escape the trap of being Air Quote movies by infusing themselves with a real love for what they're doing. I may not love Bubba, but I can't accuse anyone of not caring about the thing they're making. 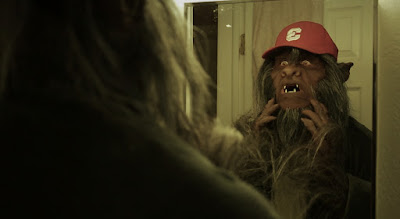 It's easy to lump Bubba the Redneck Werewolf in with Wolfcop, if only because both are high-concept horror comedies predicated on unlikely werewolves who still love to drink and screw. Truth be told, Bubba came first; it's based on a comic book created by Mitch Hyman and first published in 1996. Even the movie was made in 2014, though it appears to just now getting a DVD release. But beyond the former's longevity, there are huge differences between the two movies. Wolfcop was designed as an '80s cop movie with some major supernatural touches; it had a mystery at its center and was concerned with telling an actual story. Bubba the Redneck Werewolf is way more absurd, featuring guys with third arms coming out of their heads and lingerie-clad nuns and The Devil as its main antagonist (played by none other than series creator Hyman under makeup). It's much closer to something like Alex Winter's Freaked than it is Wolfcop.

Chris Stephens plays Bubba, a sad-sack redneck who hangs out in a bar and pines away for the gorgeous Bobbie Jo (Malone Thomas), who won't give him the time of day. Enter the Devil, who strikes a bargain: Bobbie Jo's heart for Bubba's soul. Before you can say "I can't imagine a possible downside," Bubba wakes up as a werewolf (now played by Fred Lass under heavy makeup) whose life has greatly improved as a result. The same can't be said of the rest of the folks in town, most of whom have gotten the fuzzy end of the lollipop when it comes to their Devil's deals. They all turn to Bubba to right the wrongs, bring down the Devil and get Cracker County back to normal. 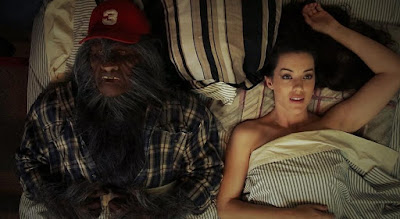 Clearly a low-budget affair, Bubba the Redneck Werewolf is no less a labor of love for everyone involved. Only a couple of the jokes land -- most of them involving the few splattery gore moments (when done practically, they're fun; when done digitally, they look like Birdemic) -- but there's a goofy spirit to the whole thing that means well. I like screenwriter Stephen Biro's choice in adapting Hyman's comic to open up the scope of the story and focus on a number of townspeople, which not only fleshes out the "universe" of the movie but also helps pad what would otherwise be a pretty thin story. Don't get me wrong -- it's still pretty thin -- but at least there's a colorful cast of characters surrounding the redneck werewolf that's as silly or even sillier, ultimately grounding the premise in its own kind of reality. I never found myself responding much to either the comedy or the horror in the movie, but I can appreciate the way it commits to being goofy.

The DVD of Bubba the Redneck Werewolf contains a 16-minute "making of" featurette, a blooper reel, a couple of deleted scenes that underscore the "shot on video" feel (the feature must have undergone a process in post to make it appear more film-like), a music video, footage of both Lass and Hyman having their makeup applied and the original theatrical trailer.

I admire the spirit of Bubba the Redneck Werewolf more than I admire the finished product. That it's lasted 20 years as an indie comic book is impressive; that it has been brought to the screen by a group of people clearly passionate about seeing it realized as a movie is equally impressive. I like that they've made a film that doesn't rest on its own cult potential alone. This isn't a case of filmmakers deliberately setting out to make a "so bad it's good" movie, the way I could easily imagine something like this going. I'm not wild about the film in the end, but it's not for lack of trying.