Off the Shelf: Vamp (Blu-ray) 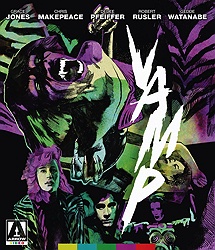 Did you ever have one of those nights?

So spoiled were we by horror in the 1980s that audiences were able to take a movie like the 1986 horror comedy Vamp completely for granted. Here's a movie that is fun and incredibly stylish, features good characters and a knowing sense of humor about itself, a handful of cool practical effects and a degree of imagination in building out its world. It is, in short, almost everything that fans of '80s horror love about '80s horror -- and yet for years the mention of its name has been meet with a resounding "Eh." (Except from Heather Wixson, who has been #TeamVamp for as long as I have known her and even organized a Vamp reunion at one of the festivals she put on a couple years back.) What is it about this movie that's holding horror fans back from fully embracing it? 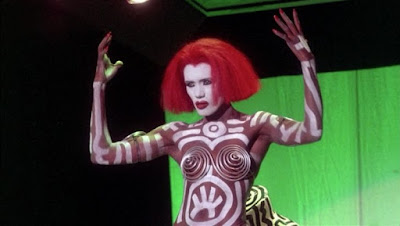 A big part of it may be the glut of vampire movies that exploded out of the mid-'80s, including several like Fright Night (the film to which Vamp can most closely be compared tonally) and The Lost Boys that blended horror and comedy in a similar way. Maybe it's just because there were so many horror movies that worked in way similar to Vamp in the '80s -- albeit in varying degrees -- that it became just another on the same fire. With some distance, though, it's easier to separate the movies from that period that are still worth our attention and the ones that remain stuck in the '80s. While Vamp is no timeless classic (it is a movie very much of its time), it does manage to stand out enough even in its own period by offering just enough distinct personality to be more memorable than the standard VHS fare. Hell, just the presence of Grace Jones (playing herself, I assume) is enough to distinguish the film.

But Vamp has its problems, some of which it never quite overcomes. The movie's biggest issue is its pacing; it comes alive during set pieces, but drifts airlessly in the scenes in between: they escape from the club, they wander around, they come back to the club, they leave, they come back. There's not enough of a sense of purpose that drives the characters' actions, and while director Richard Wenk has cited Martin Scorsese's After Hours as a major inspiration, Vamp lacks that movie's delirious energy to propel it from one absurd situation to another. The characters pop, but just don't have enough to do to remain interesting or have agency. There is, in the words of reader Aaron Mansfield when talking about The Rocky Horror Picture Show, too much loose air.

If nothing else, Vamp is worth seeing for the performance of Dedee Pfeiffer as Amaretto, a waitress at the strip club who has some sort of memory of Chris Makepeace's character that she's not sharing. Pfeiffer crackles with comic energy, smiling and being endlessly positive even as everything is going to hell around her. To watch her in this movie is to realize she should have had Cameron Diaz's career, not just for the physical similarities but for the way she brings a completely different dynamic into the film, something Diaz did in her early years when she was doing interesting work in different kinds of movies and not What Happens in Vegas. I love the way Pfeiffer and Wenk keep the audience guessing as to Amaretto's true nature, always making us wonder if there's more to her than we're being told and constantly waiting for the other shoe to drop. That such an idea can even be planted amidst Pfeiffer's sweet, sunny work is a testament to just how good she is. I adore her in the movie. 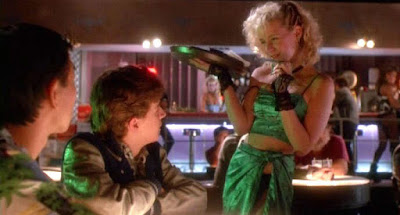 Previously available on Blu-ray as one of Image Entertainment's "Midnight Madness" releases and as a Region 2 UK release, Vamp is now getting the proper U.S. collector's edition treatment by the heroes at Arrow Video. Not only does it look great, all bathed in neon pinks and greens and revealing more detail than any previous release, but it's been outfitted with a number of supplemental materials that help make the case for the film as a special type of '80s horror. Because I'm such a sucker for retrospective pieces, my favorite bonus feature on the disc is "One of Those Nights," a new documentary about the making of the film that features comments from stars Chris Makepeace (who left acting years ago and has been notoriously difficult to track down and interview, a fact he even mentions as the start of the doc), Robert Rusler, Dedee Pfeiffer and Gedde Watanabe, as well as writer/director Wenk and cinematographer Elliot Davis, who had worked as a camera operator before but for whom Vamp was his first project as DP. They talk about working under the pressures of a low budget and a restrictive schedule, as well as share very amusing stories about what a trip -- and often a difficult one -- it was to work with Grace Jones. Also included is some rehearsal footage, a blooper reel, a still gallery and director Wenk's 1979 short film "Dracula Bites the Big Apple." Unfortunately, a handful of interviews, a Robert Rusler introduction and Rusler commentary have not made their way over from Arrow's UK release of the film, meaning completists will have to own multiple releases of the same movie from the same company.

Vamp is what so many '80s horror movies managed to be: fun. It's a bummer that Arrow couldn't have ported over all the same extras (the lack of a commentary here is a disappointment), but the movie looks great and the retrospective doc is terrific. It may not be among the greatest horror comedies of the decade, but sits comfortably within that second tier of horror comedies that are talked about less often but which are still super entertaining and help remind us of why the '80s were special. If only other filmmakers had known that to make their movies last, all they needed was Grace Jones. And her vibrator, it sounds like.