Under the Skin: More Human Than Human 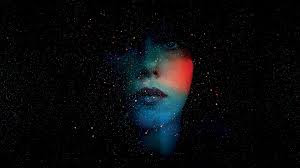 Darling it's better, down where it's wetter...Under the Skin.

Science fiction, Susan Sontag writes, “tempers the sense of otherness, of alienness, with the grossly familiar” and ultimately normalizes or softens the blow of things we find terrifying. Science fiction movies take our deepest darkest fears and swaddles them in cuddly predictability—like a hug from your mom if she were also a genetically mutated space fairy. In other words, it is something we fear—the unknown—wrapped in a package we understand fluently. But what happens when the otherness—the alienness—is us? In a medium where authenticity tends to be a hinge point for criticism, how can a director capture a perspective entirely not from this world? How can such a narrative be interesting for a (mostly) human audience? Jonathan Glazer answers the call in his sci-fi meets body horror masterpiece, Under the Skin.

Part succubus, part E.T., and all Super Babe, Scarlett Johansson beautifully navigates the role of an alien disguised as a woman. Donning a faux fur coat and a blank stare, Scarjo is employed to seduce the men of Scotland—sucking them of their life energy to...power an alien ship? I’m unsure about that last part—and if you’ve seen the movie, you probably are too—but the endgame really isn’t important here. What is important is how seamlessly this movie uses its form to fit its concept. The point is that we do not understand. That we cannot understand. Glazer’s priority with this film was to create a world in which our human existence is spit back at us—completely foreign and unnerving—as though it were not from this planet. Blending hidden camera footage with a slow, sensual pace (not to mention very thick Scottish accents) the movie asks so many questions. And doesn’t really answer...any of them? 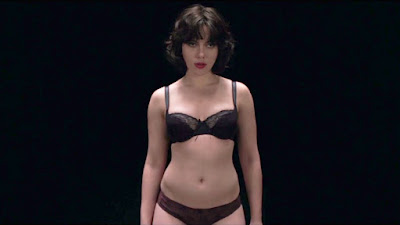 Well, sort of. The blanket criticism of the movie range from “too arty” to “extremely boring.” Which, if we’re being real, usually means I’m going to love a movie. My first complaint with this type of critique is that it’s lazy. My second is why is art a bad thing to consider when creating a film? What is wrong with blurring the lines between pure, unabashed entertainment and a conceptual aftertaste that lingers with you long after the credits roll? What is it about art that makes audience members stick up their noses, declaring the director is a navel gazing try-hard?

While I’m not in the trenches of the art world, I did get my undergrad degree in glass sculpture. And sure, a lot of the conversations I had during my four years at college were devastatingly annoying, and a huge part of why I’m no longer an “artist,” but a “writer.” But the one thing I learned, and consider the most valuable lesson of my short, unsuccessful art career, was how to get the most bang for my buck idea-wise. When you are translating a feeling, or the thought of a feeling into something more tangible (whether that be paint, words, or a movie), you have to rely on the packaging of that idea to get an audience member to understand and be on board. This can be done in long, essay style explanations that no one will read—or, more successfully, in a layering and constructing symbols that take the hand of your viewer and telegraphically coo, “It’s alright, follow me.”

It’s Under the Skin’s lack of verbiage that makes it so successful and so potent. It does this layering of color, sound, and expression to give us a feeling, not an explanation. We follow Scarlett’s journey in near silence. As she travels from each man, we can tell gears are turning, that maybe she’s going through some sort of awakening, but she stays at arm’s length the entire film. Having used hidden camera techniques on unsuspecting people, a good chunk of the “actors” didn’t even know what was going on during shooting. She dresses, makes herself up, and fabricates an entire personality almost without a hint as to why. We are a foreigner to her story in the same way she, an extraterrestrial, is a foreigner to ours. The film is built to tell us that maybe we aren’t that welcome here. But if hyper clarity is something you crave—I get it...we can’t all have the aesthetic sensibility of a toddler—a huge help to understanding the movie is tucked away in the titles of the score’s movements. 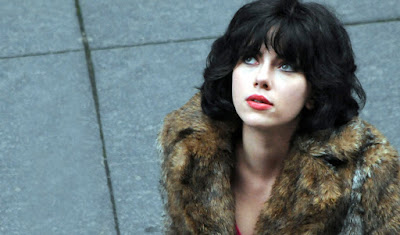 The movie begins, of course, with track one, Creation. We do not see Scarlett’s full fabrication, as a more explicit film may reveal; instead, we see only the point of origin—her eyes. We hear her learning vocalization, different speech patterns, all as her eyes are being constructed. Later, in a white void, Scarlet undresses a motionless woman—a woman who looks uncannily like Scarjo herself. This scene feels like the first and the last step in a cycle overlapping. Not only do the two women look shockingly similar—you have the hyper-cold Scarjo undressing a woman with tears in her eyes, unable to emotionally react overtly but, obviously, she’s been through some shit. After Scarlett takes her clothes, it is time for her to enter the real world. To get some dick.

We follow her as she hunts, flirting here and there, and acts out violently when rejected. In a black void she lures her victims, sucking them into a thick, sludgey ether. Here they waste away, from Meat to Maths (track 4, by the way)—their insides sucked away to a mysterious location. As she captures her men, slowly, she begins to cue into human virtues—as though infected by kindness, love, and a desire to understand pleasure in a less mechanical way. She meets a man (played by Adam Pearson) with Neurofibromatosis, a disorder that disfigures the face. He is the only one of her victims not completely consumed by her constructed beauty. Because of this, she recognizes his humanity and sets him free. Her realization to become, not a “better” person but a person at all, comes on in glimpses like these. Glazer described how he wanted her transition to go: a glimmer on a Monday, a hunch on a Tuesday, a nascence of an idea on a Wednesday, and finally by Friday you can put a name to how you feel. The structure of the movie perfectly reflects that, and, despite being about some alien, it also reflects exactly how ideas are generated in all of us. No one wakes up and suddenly does a 180 on her life, and to keep seeing that in movies for the sake of fitting into a comfortable 120 minutes is silly. Perhaps this is the essence of familiarity we are supposed to find comfort in.

Under the Skin is an strange movie about a strange creature. We’re not supposed to get it and we’re not supposed to walk away with all the answers. This is what makes a successful horror film for me. It’s the kind of movie that sits with you when you have to grab a glass of water at 2 in the morning, making your heart race. Glazer uses an unfamiliar pacing and structure to alienate us as viewers. And boy, does it work. I understand that movies that dabble in the artsy-fartsy are not everyone’s cup of tea, but I wish it wouldn’t be such a point of contention or immediate dismissal out there on the interwebs. In the case of Under the Skin, being kept in the dark is half the fun, and if things were explained, the movie would probably end up being crap. It’s slow, artsy, a little romantic and indulgent in how it’s shot, and there’s really nothing better than that.

For those interested, I highly recommend putting the soundtrack into your ears: