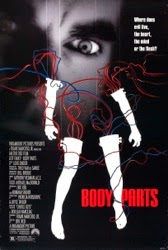 About two years ago, I finally saw writer/director Eric Red's 1991 horror thriller Body Parts for the first time and could ask myself only one question: Where has this movie been all my life?

As we get further away from them and realize that the 1990s -- long considered a terrible decade for horror -- weren't as bad as we once thought, there are certain movies that are coming into focus as having been secretly great while others once more respected disappear from our memory. It's rare to hear someone going on and on about how much they love Urban Legend these days even though most of us horror fans went to see it 1998, while John Carpenter's In the Mouth of Madness has become a modern classic despite not being a big hit at the time. Then there's a third category, consisting of movies that many of us let slip by -- like Eric Red's Body Parts -- that are terrific and should be mentioned in every conversation about the best horror of that decade. Seriously, why aren't more people talking about Body Parts?

I missed out on Eric Red's Body Parts during its theatrical run back in 1991, first because I was too young to go see it on my own and second because I just didn't know anything about it. I remember seeing the ads and not recognizing a single actor in it; Jeff Fahey was not a known quantity at the time (I hadn't seen Psycho III yet) and I couldn't wrap my head around a major studio wide release being put out without a movie star in the lead. And while the premise of the movie seems super familiar now -- guy gets a body part transplanted from a killer and begins to experience homicidal impulses -- as a kid I think I had a hard time accepting such a premise. I mean, it's like I had never even heard of Oliver Stone's The Hand.

As the years went by, Body Parts continued to stay off my radar. There was a DVD but it went out of print. It would show up on cable sometimes, but not often enough for me to accidentally catch it. I was part of the problem. It wasn't until maybe two years ago that I finally rented the movie from Amazon and watched it by myself on a Friday night that I realized that my life to that point had a Body Parts-sized hole in it that was finally being filled. After just one viewing, it became one of my favorite horror movies of the 1990s. 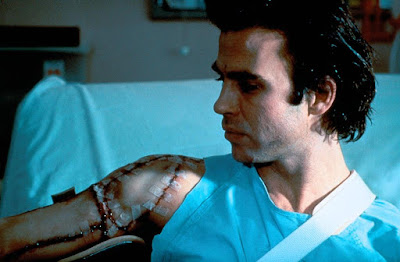 Fahey plays Dr. Bill Chrushank, a prison psychologist who has a brutal (and brilliantly filmed) car accident in which he loses his arm. He's approached by Dr. Agatha Webb (Lindsay Duncan), a scientist who offers him the opportunity to participate in a cutting-edge surgery (pun intended?) in which a new arm will be grafted onto his body. Chrushank agrees and receives his new arm, but something is...off about it. He finds himself losing control of the arm at times, driven to murderous impulses and given to hallucinations in which he is killing people. With the assistance of a few more of Webb's patients (including Brad Dourif), Bill discovers the truth about his arm. It's what you think it is.

So while we have seen the central idea of Body Parts (adapted from the book Choice Cuts by Pierre Boileau and Thomas Narcejac) played out in a number of horror movies and TV shows, the greatness of Eric Red's movie is in the new places he finds to go with the story. To really explain all the things I love about Body Parts would require some major spoilers, and since the purpose of this piece is to shine a light on a movie I want everyone to see it wouldn't make much sense to give things away. Suffice it to say that by the film's end, it has jumped genres a few times and crossed over into both the mad scientist movie and even elements of zombie horror. It is impossible not to love a film in which a character has to scoop up and bunch of severed limbs and get them out of his car before it explodes. 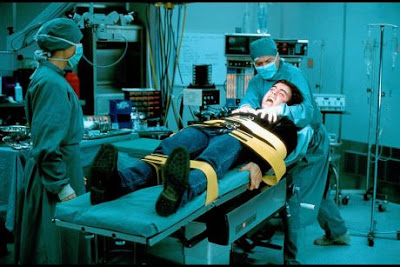 The movie's willingness to go big is its greatest asset. The '90s were a time in which a number of studio horror movies were trying to distance themselves from the down-and-dirty excess of the '80s and go for "classy" (which is how we wound up with films like Mary Shelley's Frankenstein and Wolf). Not Body Parts, though. While the film is put together as well as any of the "classier" genre movies of the decade thanks to Red's compositions, excellent photography by Theo van de Sande and Dutch composer Loek Dikker's terrific score, Red is quick to embrace the pulpiest elements of the story and then underscore them with some gnarly violence. He knows how to make his horror movies nasty in the best way, and the gore sequences in Body Parts achieve a kind of operatic quality rare for the decade.

While Jeff Fahey has since become a terrific character actor -- often a highlight of anything in which he appears -- in 1991 he was leading man material. With his full lips and piercing eyes, Fahey has a kind of dark handsomeness that lends itself to madness, and that's exactly where Body Parts slowly takes him. Many of his best scenes take place opposite Kim Delaney, playing his wife and the mother of their two kids. The attention to which Red and the actors give to the marriage grounds the film in a very real humanity, which is what allows it to get away with going so over the top elsewhere without ever teetering into silliness or camp. There is a scene in which Fahey's possessed arm makes him lose his temper with his kid and get physical, and his immediate horror at what has happened and Delaney's very real anger is so believable that for a moment we forget we're watching a balls-out horror movie and get lost in the domestic drama. This is no an accomplishment that should be taken lightly. 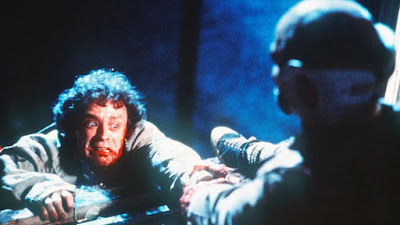 Despite their reputation, the '90s were decent for horror -- a far cry from the embarrassment of riches of the '80s, but producing enough good horror that they should be remembered more fondly. Each year offers a handful of titles that, even if they weren't given their due at the time, have proven to be standouts in the genre and found their audience. For some reason, Body Parts hasn't yet achieved the same cult status as something like Demon Knight or Lord of Illusions, and I'm really not sure why that is. Maybe it's just a matter of access; a special edition Blu-ray might help the movie to be rediscovered -- or discovered in the first place -- as the great film it is. It's one of my favorite horror movies of the '90s. See it. Spread the word. People need to be talking about this one.