We are all interested in bad “B movies,” worse-than-mediocre pictures, and drive-in crapola, for that is the stuff we use to fill our lives when we are not swimming down at the lake. You are interested in the lost, the lonely, and the vicious—that is why you are here. And now, for the first time, we are bringing you the full story of some of the worst movies ever made. We are bringing you all the evidence, based only on the secret testimony of the miserable soul who survived both a screening and a spin around the block in a souped-up dragster. I am that miserable soul. The absurdly low budgets, the unconvincing resemblance to real life events, the inane dialogue—my friend, we cannot keep these a secret any longer. Let us punish the guilty. Let us reward the innocent. Remember, my friends: terrible movies such as these will affect you in the future! 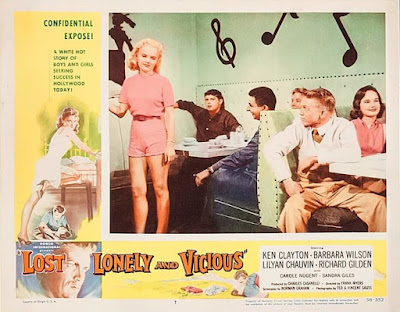 Once again the fine folks at Something Weird Video (like their spiritual ancestors in the drive-in movie marketing and exhibition industry) suckered me in with a title. How (I asked myself) have I lived my life and NOT yet seen a teen exploitation rarity titled Lost, Lonely, and Vicious? So enticing was the title alone that I swear I would have been satisfied if only two of those adjectives were brought to life onscreen. I would have welcomed Lost and Lonely, or Lost and Vicious, or even Vicious and Lonely. I am a simple man with simple tastes. 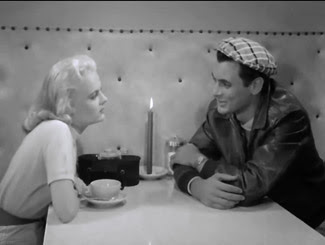 The Plot In Brief: Johnnie Dennis (Ken Clayton) has become a successful actor, snagging bigger parts and becoming talk of young Hollywood. This galls his so-called friends back at the coffee shop who, like most actors, secretly root for each other’s failure. Walt (Richard Gilden) is the worst of these so-called friends and he is constantly insulting and hitting Johnnie to vent his jealous rage. When not engaging in those pointless and self-defeating behaviors, Walt spends his time bumming free cups of coffee from strangers and trying to pick up chicks. Could Walt be LOST?

Johnnie is having a difficult time adjusting to fame. He takes to reading books about death and racing his cool dragster up and down the Sunset Strip. One night while skipping his own movie premiere, Johnnie almost runs over toothsome drugstore employee Helen Preacher (Barbara Wilson). Once she recognizes him as that hot new actor, Johnnie finds it easy to talk her into a nighttime swim down by the lake. (Johnnie keeps extra women’s bathing suits in his trunk just in case; I’m guessing he stocks several sizes.) Could Helen be LONELY?

Later, Johnnie returns to the coffee shop and gets into a hell of a punch-out with the still jealous Walt. Johnnie’s haymakers, needless to say, knock Walt for a loop. Is Johnnie VICIOUS? 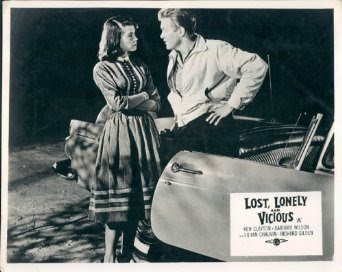 Now I’m going to blow your mind with a theory. Ken Clayton resembles James Dean—if you squint. And young actor Johnnie Dennis has the same initial as… young actor JAMES DEAN. Have I cracked the da Vinci Code of this movie’s secret appeal? Are the producers here playing a game of “winkedy-wink” because, unable to afford the rights to the real, at-that-time-still-recently-deceased star’s life, they’ve presented it here incognito?

The answer is no. That is too interesting to have happened anywhere near Lost, Lonely, and Vicious. This film’s story bears no resemblance to the life of James Dean—unless Dean’s life was a stultifying series of clichéd, mediocre set pieces culled from bad, low-budget teen flicks. If the real James Dean’s life resembled this film at all, perhaps we should be investigating whether Dean’s famous and fatal car crash were actually a suicide planned to provide the sweet release of death. Lost, Lonely, and Vicious is a botched smorgasbord of cheap production values, narrative dead-ends, and padding. 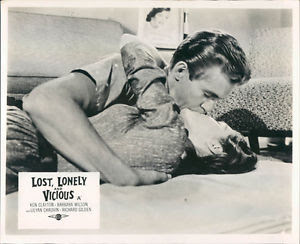 Bait and Switch: A better title for Lost, Lonely, and Vicious would have been Bored, Distracted, and Pointless. This movie resembles a low-budget television pilot brought to feature length with extraneous hot rod scenes that have so little bearing on the narrative that the producers might have purchased them from a stock footage library. They balance out the endless scenes in the coffee shop that have nothing to do with the main protagonist’s storyline.

My friend, you have now read this column, based on my own sworn testimony. Can you prove that this film doesn’t exist? Perhaps on your way home, someone will pass you in the dark, and that person will be in a flashy sports car, driving down to the swimming hole with his best girl by his side. Many scientists believe that bad movies are being filmed at this very moment. We once laughed at fire, the wheel, actor’s schadenfreude, and vicious, lost loners. So much laughter! And now some of us laugh at very bad movies. God help us in the future.

Email ThisBlogThis!Share to TwitterShare to FacebookShare to Pinterest
Labels: glutton for punishment, lost lonely and vicious, something weird