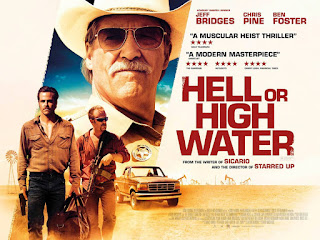 “I never met nobody that got away with anything, ever.”

The opening sequence of David Mackenzie’s Hell or High Water plays big, open skies against a desolate small-town square. It’s one 360-degree pan that encompasses every-thing America used to believe about itself and everything it failed to accomplish since then. Cheap signage advertises Easy Credit and Low Financing. Scrawled graffiti laments, “Three tours in Iraq, but no bailout for us.” Christian crosses are worked into the facades of mom-and-pop stores that have long-since closed their doors. This is the story of one-horse towns and no-win scenarios. This is what’s left of the West.

Brothers Toby and Tanner Howard (Chris Pine and Ben Foster) are robbing a string of West Texas banks in an effort to pay off the debt owed on their mother’s house before it falls into foreclosure. They hit the smallest branches during just the right early-morning hours, taking only small and loose bills, then drive to an Oklahoma casino to launder the money. That money is then converted into checks made out to the very banks they’ve stolen it from, the very banks that duped their dying mother into a reverse mortgage and snatched their birthright out from under them. They only rob these specific banks, and they never take any money that belongs to real people. They use a different beater car every time, paid for in cash, and then bury each one in the backyard after the heist is over. They’re so meticulous in their planning and execution that they’re leaving Texas Rangers Hamilton and Parker (Jeff Bridges and Gil Birmingham) very little to go on in their hunt to bring them down. But Hamilton knows this pattern. These boys aren’t driven by greed or a thirst for killing, he figures. This is the smart work of smart people. 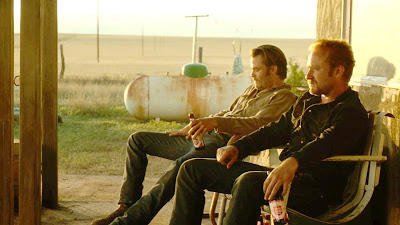 Hell or High Water is a quiet and contemplative little movie about Has-Beens and Never-Weres. It’s about the people left behind by technology and royally fucked by big business. There’s a sense of dread and hopelessness permeating through each of the small towns we visit; it’s not that these people are down on their luck, it’s that they never had any luck to begin with. Entire scenes are framed around characters standing on porches and gazing out onto empty rural landscapes as if they’re simply waiting out the rest of their lives. Still, they pride themselves on their Heartland values and loose open-carry laws (how often do you see bank robbers fleeing the scene with five pick-up trucks full of Good-Ol-Boys in hot pursuit? “I love West Texas,” Hamilton laughs). The film has a rebel soul to it, an almost anti-institutional bent that colors the decisions made by even the most law-abiding characters. It never forgets about the individuals being crushed by these giant corporate machines: there’s an excellent bit involving a waitress who refuses to let the cops take her tip money into evidence. She needs it, after all, and these bank robbers aren’t any concern of hers (it doesn’t hurt that she’s hot for Chris Pine, because who wouldn’t be?). 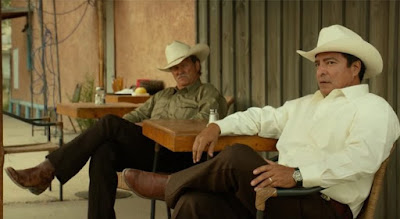 It’s this stubborn defiance that drives the film’s best performances, none more so than Ben Foster as The Screw-Up, Tanner. He’s dumb but not that dumb, strong enough to know better but proud enough not to stop. Writer Taylor Sheridan (Sicario) wisely avoids giving him The Big Scene, the one where he falls apart and sobbingly confesses how little he has to live for before going out in a blaze of glory. Hell or High Water certainly has its didactic moments, but it trusts the audience to understand Tanner purely through context and character. Chris Pine continues to develop as a leading man and carries the moral center of the film in his chiseled mustache. Again, this isn’t a hero. This isn’t a fight to save the girl or slay the dragon. Toby knows he’s the bad guy and that his ex-wife Debbie (Marin Ireland) will want even less to do with him when this is all over, but at least he’ll be restoring to his sons what is rightfully theirs: the oil under-neath their property. What’s fair is fair in West Texas, after all. Jeff Bridges does his Jeff Bridges thing with grace and care. He’s got a few showy moments near the end, but he never plays his retiring lawman as broken or angry. He’s just an old-timer with a lot more to say than his remaining years will allow.

Hell or High Water carries the spirit of crime dramas like Fargo and No Country for Old Men without getting too operatic for its own good. It spends its running time developing one very relatable thesis before paying it off with the kind of moral complexity it really deserves. It’s a film about division and independence, about race and class, about borders and boundaries. It’s not exceptionally taught or action-packed, but that’s by design. These aren’t expert con men looking for One Last Score or big-city cops delivering Hard Justice. It’s not about twists and turns or dense, complicated plotting. It’s about moments between men sharing a beer on the front porch and what those men will do to protect the people they love. They’re good and bad, us and them.
Posted by Patrick Bromley at 12:00 PM