More good (and good-adjacent) movies you may have missed this year hit Netflix! 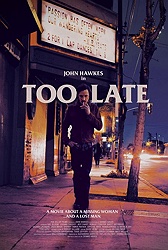 Too Late (2016, dir. Dennis Hauck) The feature debut of writer/director Dennis Hauck is an insanely ambitious, sprawling neo-noir shot on 35mm and constructed of five scenes shot as uninterrupted single takes. It's a gimmick, sure, and one that's more about proving it can be done than it is about serving the story, but I can't help that I enjoy seeing a filmmaker really flex his or her muscles and pull off something really challenging. It's a movie that gets better as it goes along and the story begins to come into focus, bolstered by a characteristically fantastic turn by John Hawkes as a private investigator looking for a missing girl. Some of the dialogue can be a little yeesh but the stuff I like outweighs the stuff I like less. Thanks to Chaybee for talking it up when it was in limited release earlier this year. (Watch on Netflix) 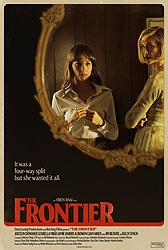 The Frontier (2016, dir. Oren Shai) Another neo-noir, also shot on film, also a first feature from its writer/director. Adam Riske's girlfriend Jocelin Donahue plays a woman on the lam who arrives at the out-of-the-way Frontier hotel/restaurant, where she finds herself in the middle of some shady characters looking to make a big score. In addition to Joc D, this terrific little crime thriller stars A.J. Bowen, Jim Beaver, Kelly Lynch and Liam Aiken. If you're at all a fan of Southern noir like Blood Simple and Red Rock West, this is the movie for you. It's one of the better surprises of the year. I paid to rent it on iTunes just a couple weeks ago, but now you can already watch it for "free" on Netflix! Also, Shock Waves host/friend of the site/all around hero Elric Kane is a producer on this, so we should all show our support. I wouldn't say that if it wasn't really cool movie. (Watch on Netflix) 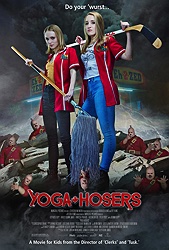 Yoga Hosers (2016, dir. Kevin Smith) Yeah, yeah, I know. There's literally not one thing you could complain about when it comes to the latest Kevin Smith movie that I wouldn't agree with, but I also feel like everyone involved is having so much fun -- and it's the kind of infectious fun that comes across on screen -- that I can't help but be charmed by it. This is Smith paying tribute to Charles Band and Full Moon, combining it with a movie about teenage girls that seems to actually like teenage girls instead of portraying them as backstabbing or vapid. Smith's daughter, Harley Quinn Smith, and Lily-Rose Depp are both having the time of their lives in this silly ass movie and have an on screen dynamic that's totally winning. Fun is in short fucking supply in 2016, so I'll take it where I can get it (Watch on Netflix) 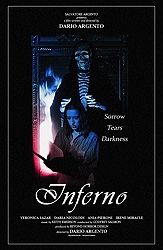 Inferno (1979, dir. Dario Argento) So it's not one of Argento's best, but I'd put this in his top five for sure. The middle chapter in his "Three Mothers" trilogy makes absolutely no sense (it has something to do with cats, right?), but it's so beautifully lit and shot and full of so many effective set pieces that I I have to love it. I'd argue that this is one of his most underrated efforts, but there are still a few I haven't seen. This is brand new on Shudder. (Watch on Shudder) 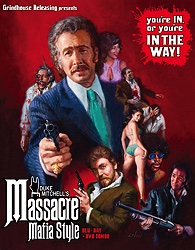 Massacre Mafia Style (1974, dir. Duke Mitchell) I'll admit that I canceled my subscription to Exploitation.TV right after #Junesploitation because it offers mostly vintage porn, which I'm not really into. But it does have this wonderful crime opus from Duke Mitchell, an old-school crooner who made a pair of independent movies in the '70s that define "passion project." I strongly recommend reading up on Mitchell and the history of this movie; better yet, buy the Grindhouse Releasing Blu-ray and work through all of the special features. The movie works on its own if you know how to watch stuff like this, but you can appreciate it even more when you know the story behind it. (Watch on Exploitation.TV) 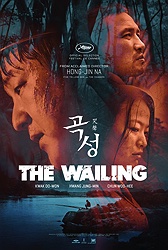 The Wailing (2016, dir. Hong Jin-na) This first came to my attention when I heard it talked about on Shock Waves several months back, then our own Melissa Uhrin has been talking it up for some time now (in particular the performance by Kwak Do-won). I bought a digital copy on Vudu several weeks ago for under $5, but that requires me to remember that I have a Vudu account. Needless to say, it went unwatched. Then it showed up on Netflix this week and I finally caught up with the movie, which is crazy and completely unpredictable and, at two and a half hours, quite long. There's no predicting where it will go even after its first 90 minutes, which is something not uncommon to Korean cinema. That's one of the things that draws me to it, since that shit will never fly in American movies. I don't love everything in the movie (a trend this week?), but I do love how many different places it's willing to go. Oh, and Melissa is right: Kwak Do-won is awesome. (Watch on Netflix)
Posted by Patrick Bromley at 12:00 PM