Off the Shelf: Hannie Caulder (Blu-ray) 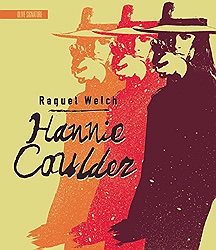 There was a notch on her gun for every man she got!

The 1970 movie Hannie Caulder is a fascinating mix of a traditional American western and a nastier Italian one. Director (and uncredited screenwriter) Burt Kennedy knows his way around the genre, having directed mostly westerns from the 1950s through the '70s, but here is pushing in a darker, bloodier direction. This is a movie with a glamorous, iconic movie star playing cowgirl, a rousing and upbeat score Ken Thorne and a rape revenge plot at its center. It's a weird combination of elements, but that's what makes it great. And Hannie Caulder is pretty great.

After a bank robbery gone wrong, the Clemens gang -- played by Ernest Borgnine, Jack Elam and Strother Martin -- come upon a ranch occupied by Hannie Caulder (Raquel Welch) and her husband. The men murder the husband, rape Hannie and burn the house to the ground leaving her for dead. The surviving Hannie enlists the aid of bounty hunter Thomas Luther Price (Robert Culp) to train her as a gunfighter so she can get her revenge on the men who wronged her. Like all revenge missions, this one gets bloody. 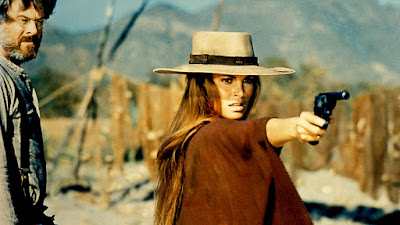 There's a lot to appreciate in Hannie Caulder, whether it's the gorgeous vistas photographed by Edward Scaife or Ken Thorne's rousing score or the character actor triptych of Ernest Borgnine, Jack Elam and Strother Martin or the appearance of Christopher Lee as a cowboy or the very existence of Raquel Welch, a screen presence unlike anyone before or since. But the movie's true secret weapon is Robert Culp as the bounty hunter who becomes a mentor to Hannie in much the same way that Dr. King Schultz did to Django in Django Unchained. While the character work is good across the board (save for Hannie, who is mostly a cipher), Culp creates someone who feels brand new and fully realized. He's almost bookish -- a badass who never has to prove he's a badass -- and his relationship with Hannie feels like it could be romantic someday but is borne out of mutual respect. I don't want to suggest there's something paternal about it because that, combined with the possibility of romance, makes it sound creepy. It isn't. I love their dynamic, mostly because I love Robert Culp here.

I also love the way that director Burt Kennedy commits to all of the movie's big emotions. Hannie Caulder doesn't do anything by half measures, whether it's the bloody violence or Hannie's impassioned rage or the operatic western scope. That's why I mean when I say that the movie feels like a really good mix of American and Italian styles; there's something that's always a little bit square with most American westerns and something unabashedly emotional about spaghetti westerns. Hannie Caulder exists at the cross section of both. 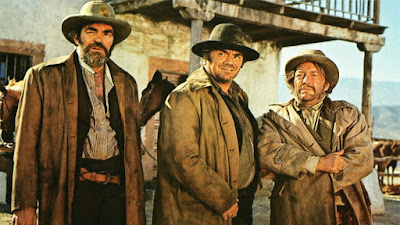 Hannie Caulder is the next in Olive Films' "signature" line; though the company first released the movie on Blu-ray in 2011, this new disc contains an updated HD transfer and a handful of bonus features to make it a true "special edition." The 2.35:1-framed, 1080p HD image is very good, cleaned up and boasting nice detail as well as a considerable amount of grain. There are some really good bonus features, including a commentary from filmmaker and fan Alex Cox (Repo Man, Sid & Nancy) and some interviews that that discuss the making of the movie and its placement within the rape-revenge genre, which arrive at the conclusion that it's not a great example of female empowerment because so much of film is experienced through the POV of the rapists.

I first caught Hannie Caulder on Netflix a year or two ago. It has since been removed, because such is the downside of streaming media. This is a movie I want to own, so I'm happy to see Olive Films upgrading their original barebones Blu-ray release and giving this title the special edition treatment it deserves. If you haven't seen it and you find yourself ever agreeing with my tastes, you really should check it out. This is a movie that deserves a bigger audience. Do it for Robert Culp.