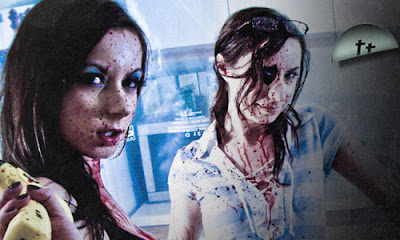 Live every month like it's Women in Horror month!

I've been trying to write some stuff about Women in Horror Month this February because a) I love horror movies and I love different voices in the genre and b) if I don't, I'm just part of the problem. My favorite subscription service Shudder has curated a decent-sized library of titles directed by women, so I've gone a step further and done you the service of pulling out a bunch of the movies I think are really good and/or worth watching. You know how I do. There are a lot of good films -- and, even more, a lot of great filmmakers -- on this list. Even if you don't get a chance to watch everything included, be sure to follow the careers of most of the names mentioned. 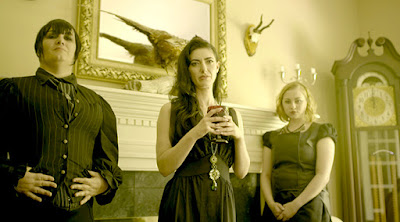 Loosely based on H.P. Lovecraft's 1931 novella The Shadow Over Innsmouth, writer/director Izzy Lee's short film switches the gender roles for a film that both stars primarily women and is also specificially about women. A detective discovers a unusual murder scene, the investigation of which leads her to Innsmouth and into the company of a strange woman (played by indie horror mainstay Tristan Risk, forever a welcome presence in anything). The short has some rough edges, but that's the nature of Lovecraft. It's all about dread and weirdness, which Lee completely gets. She also offers up one of the craziest money shots I can think of in recent horror. You won't soon forget it. 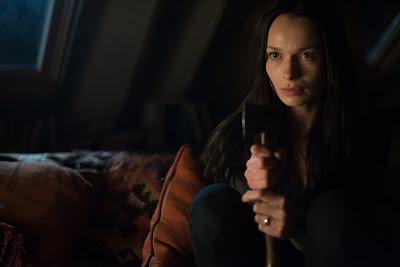 While a number of contemporary horror directors have done a modern spin on ghosts, the debut feature from writer/director Axelle Carolyn is an old-school gothic ghost story -- more The Innocents than The Innkeepers. The film, about a woman who moves to a potentially haunted cottage after a failed suicide attempt, is gorgeous and moody and atmospheric and all of those words you use to describe horror that isn't really scary but also is not trying to be. It's a lovely film borne of a very specific vision. I can't believe Axelle Carolyn hasn't yet directed another feature (though her segment in Tales of Halloween does some of this same stuff very well but adds in the scares). Somebody greenlight her next project already. 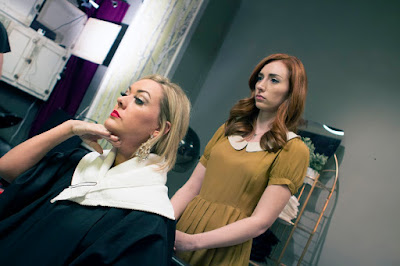 One of my favorite horror shorts of recent years casts Contracted's Najarra Townsend as a hair stylist who gets a client late one night and gives her a very special haircut. The most ambitious short to date from director Jill Gevargizian is evidence that she needs a feature sooner than later, as this is exquisitely made and acted -- the photography is beautiful, the compositions and pacing confident. Plus, it's really gory and gross. What I especially like about it is the way it begins, as many short films do, as something that is premise-based but by the end has totally become a character piece. I will continue following Gevargizian closely and can't wait to see what she does next. A few weeks ago I was talking with my Daily Dead peeps and nominated her to direct the next Halloween movie based on this short. We know that won't happen now, but I'm ok with that. I think I'd much rather see what Gevargizian comes up with on her own than have to play in someone else's sandbox. 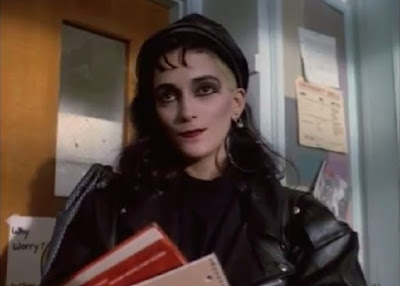 The late '80s and early '90s saw a handful of prominent horror movies being directed by women -- Kathryn Bigelow directing Near Dark, Mary Lambert directing Pet Sematary, Rachel Talalay directing Freddy's Dead: The Final Nightmare -- but it was still too much an exception and not enough rule (the more things change...). One female-helmed horror movie that doesn't get talked about enough -- and by that I mean practically at all, since I had never heard of it until it showed up on Shudder several months back -- is Marina Sargenti's Mirror, Mirror, about a super goth girl (Rainbow Harvest) who moves to a new house where she finds a magic mirror with the ability to grant her wishes. Discovering this one made me sad I hadn't seen it years earlier, as there's so much to like in it: Rainbow Harvest is Winona Ryder in Beetlejuice by way of Leslie Mann, plus Charlie Spradling is in it. But the best thing about Mirror, Mirror is its willingness to go to places I suspected it would only hint at going. Director Sargenti never made another theatrical feature, instead directing TV for a few more years before apparently getting out of the business. 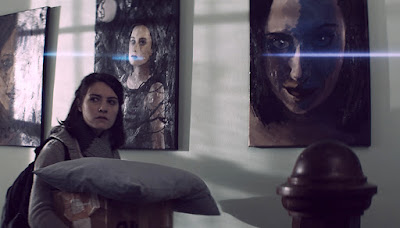 Like Axelle Carolyn's Soulmate, Briony Kidd's short film is a lovely gothic piece about a girl who rents a room and encounters the "ghost" of the young woman who occupied it before her. The horror elements are pretty minimal, but it's very gorgeous and deliberate and offers some thoughts about identity and finding our place in the world. 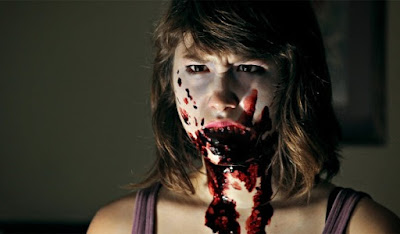 Originally known as the 12-year old director of the zombie film Pathogen (and subject of the subsequent documentary Zombie Girl: The Movie), Emily Hagins has carved out a real career for herself both inside the horror genre and out (see: Coin Heist). Her third film, My Sucky Teen Romance, is more of a teen comedy set inside the horror universe as a young girl falls in love with a teenage vampire during a weekend at a genre convention. This feels the most personal of all her movies because it's so much about being young and loving certain kinds of stuff -- Hagins sets it in a world that feels totally authentic because it's a world she knows. It's neither the funniest nor the most romantic of romantic comedies, but it's utterly charming. 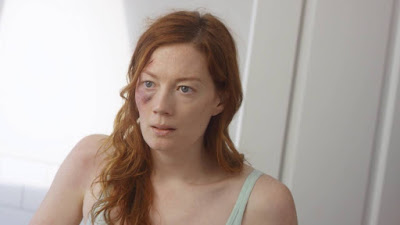 This very short short film (it runs under five minutes) is a mostly dialogue-free execution of a single idea in which a woman (Monica West) who recalls an attack from the night before. There aren't many surprises in store, but there is one very striking image and I like the short's howl of rage against a specific subgenre that's been big in horror since the 1970s. It's an entry in that subgenre that feels like it could only have been made by a woman, and that's why it works. 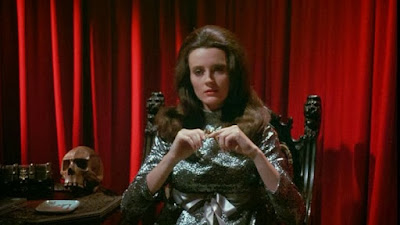 It's only been in the last year or so that I have discovered the work of Stephanie Rothman, one of the few women directors who was actively prolific in exploitation during that genre's Golden Age. I'll be honest: The Velvet Vampire might be my least favorite of her movies (the others include The Working Girls, The Student Nurses, Group Marriage and the excellent Terminal Island), but it's still worth a look for the way it blends some really beautifully done dream sequences, vampire tropes and subversive comedy. I love the way that Rothman approached different genres within exploitation from her unique perspective. It's the exact reason why a diversity of voices in horror is so important.

The Strange Colour of Your Body's Tears (2013, dir. Hélène Cattet and Bruno Forzani) 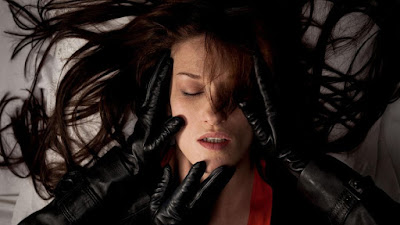 Beautiful, strange, completely confounding sort-of giallo from the directors of Amer (which I still have not seen) follows the mystery of a man (Klaus Tange) looking for his missing wife and encountering a series of new characters and mysteries along the way. It looks great, it sounds great, but even by the standards of the Italian horror films from which it draws such an influence it's really hard to follow. While it's co-directed by Hélène Cattet and Bruno Forzani, the participation of Cattet is what interests me this month and earns the movie a spot on the list because there are so few giallo films directed by women. 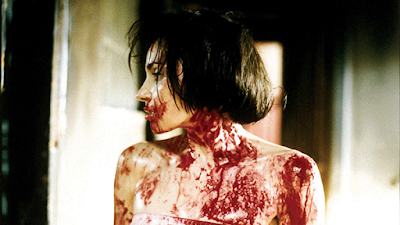 French director Claire Denis' part psychological, part visceral horror film from 2001 is, shall we say, fucked up. It's got murder and obsession and cannibalism and Vincent Gallo, all things with the potential to be completely nightmarish. The movie can be a challenging watch, but the way that Denis cuts through the drama with bloody brutality is fascinating. You have to admire a movie that starts weird and dark and only gets weirder and darker. 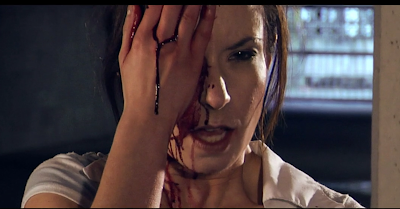 It's hard to imagine putting together a list to celebrate Women in Horror Month and not include Jen and Sylvia Soska -- aka the Twisted Twins -- siblings who have made a huge mark in horror and who have served as ambassadors for women in the genre for the last decade. Their second feature, American Mary, is their best film by a pretty wide margin but isn't available on Shudder. Instead, the service carries Dead Hooker in a Trunk, the sisters' 2009 debut feature shot for $2,500 after they were inspired by seeing Grindhouse. It's a first film and it feels very much like one, super rough around the edges but made with a ton of energy and attitude. It's more mid-'90s, post-Tarantino crime caper rip-off than it is straight horror, but it's very entertaining if you watch it as the building blocks of what's to come. It's also fun to see the sisters play the two lead roles; they cameo in their other movies, but this offers their largest acting roles to date.
Posted by Patrick Bromley at 12:00 PM