Come with me to infinity and beyond… 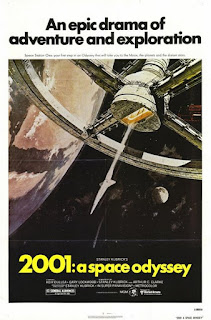 Stanley Kubrick was a master at creating images that stuck in popular culture’s collective consciousness. How many times have we seen references to Slim Pickens riding the nuclear missile to mankind’s destruction in Dr. Strangelove, or references to the creepy twin girls or mad Jack Torrance from The Shining, or references to Alex and his droogs from A Clockwork Orange? The king of these influential films is undoubtedly 2001: A Space Odyssey, which released a torrent of ideas and images when it was first released in 1968.

Take the iconic sequence in which an ape throws a bone in the air and a jump cut transforms it into a space station—thousands of years of progress condensed to a nanosecond. Also memorable is the docking sequence, as the transport ship, the space station, and even a pen dance to the strains of Strauss’s “The Blue Danube” waltz. No one who has ever seen 2001 can forget the iconic “Star Child,” this remarkable film’s final image. Kubrick gives us all a visual vocabulary with which to dream.

But it is not pretty pictures alone that make great films. Great films are full of great ideas, and in 2001 we find the mother lode. In this column I have often complained of films that have a hard time being about one idea, much less many ideas. I might argue that 2001 has too many ideas in its head, if such a thing were possible. There are not many films that seriously meditate on man’s place in the universe. As a man living in this universe, I wish there were more. 2001 is a work of deep seriousness that ponders the Big Questions: Where we did come from and where are we going? Is our technology designed to serve us or replace us? Does life exists elsewhere in the universe and we will ever meet? 2001 is a movie with issues.

The Plot In Brief: Man’s early ancestors have a devil of a time fighting off predators and other tribes. Utilizing a bone as a weapon, our primitive forefathers take the first step toward invention and technology. A mysterious black monolith is on hand to witness this breakthrough.

Thousands of years later, another black monolith is found on the moon. When touched, the monolith sends a radio signal to a far distant point past Jupiter. Several astronauts are sent to investigate, which proves difficult when the HAL 9000 shipboard computer seems to malfunction. 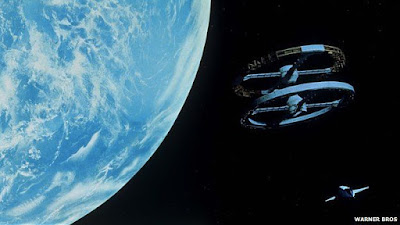 Given the Pope’s amazing alacrity when it comes to movies, it is inconceivable to me that I cannot remember the first time I saw this film—perhaps because this is one of those films that, once viewed, occupies one’s unconscious as if it has always been there. I do, however, remember the best time: a special 70mm screening of 2001 in the year 2001 at Roger Ebert’s Overlooked Film Festival. The screening required the installation of a special larger screen and towering speakers; after the screening, Ebert interviewed Kubrick’s co-screenwriter, author Arthur C. Clarke, live on Skype from Sri Lanka.

The Pope wishes that he were older than six when the film was first released in 1968. Original roadshow screenings featuring the deeply curved Cinerama screen and a 70mm projection print. Hell, the chance to talk to fellow moviegoers after the screening about what was then (and still is now) a head-scratching wonder of a film would have been instructive and delightful.

Rumor has it that many members of the film’s original audiences augmented their viewing experiences with hallucinogenic drugs. The Pope has heard tales of many college students back then attempting to “time” the ingestion of LSD so the effects of the drug would coincide with the trippy “star gate” sequence. Similar incidents were apparently common when Walt Disney re-released Fantasia to movie theaters in 1967, heralding screenings with a trippy black light poster. 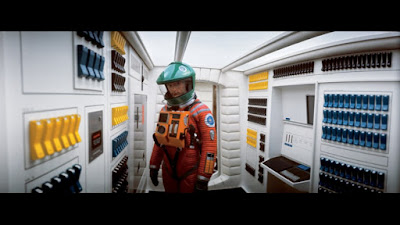 Both of these attempts to improve the experience seem misguided: no drugs are needed to improve 2001 (and no amount of drugs on Earth can possibly raise Fantasia from the pretentious, snoozy slog it has always been and always will be. Thus says the Pope. So it is written, so it shall be.)

There are so many groundbreaking and beautiful aspects of this film that it is hard to confine myself to just a few. I admire how Kubrick eschews narration and dialogue for the first twenty and final twenty minutes. Filmmakers used to give their audiences tremendous credit for watching and thinking. I admire Kubrick’s use of music, not just “Also sprach Zarathustra,” which has become the “Jaws Theme” of 2001, but also pieces by Gyorgy Ligeti for the film’s climax—music that I find truly scary and chilling to this day. Kubrick commissioned Alex North to write a “proper” film score for 2001, but during postproduction, he changed his mind and decided to go with the temporary guide music he was using to edit the film. Of course, no one associated with the film shared this information with Alex North, who found out that none of his score was used at the film's world premiere.

Exactly three years ago, Adam Riske and your Pope enjoyed a conversation about 2001: A Space Odyssey via e-mail that later became one of his columns. I was happy with our conversation and with Adam’s column, not because it was the last word on the film, but rather because it continued a conversation between film lovers that really started at the 2001’s premiere and continues to this day. This is a film to mull over, revisit, and discuss with other people. You can find that column here.

2001’s Three Miracles: A script by Kubrick and Arthur C. Clarke that is brimming with ideas; special effects, both practical and optical, that still hold up today; and Douglas Rain’s beautiful, affectless voice as the HAL 9000 computer, the victim in one of the most disturbing murder sequences ever filmed.