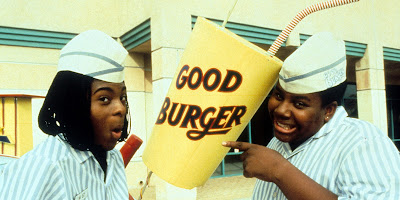 This movie came at a pivotal moment in my life.

In July of 1997, my relationship with my group of high school friends was at an impasse. Many of these friends of mine I had since elementary school, so we went way back. At the time of the release of Good Burger, we were a faction with warring ideologies. The posse of which I was once the alpha had cast me aside in favor of nefarious endeavors. I was innocence. They were Devil’s Night. I was in a state of arrested development. They had a 50/50 chance being arrested each weekend. They wanted to take drugs. I wanted to see Good Burger.

The summer of 1997 sucked ass. Cut to two months prior to May of 1997 and I remember having one particularly shitty birthday. It was a Sunday. I had just turned 15. I went out to celebrate with my family. None of my friends wished me a happy birthday all day. As the hours wound down I remember taking a bath. I sat in the tub mulling things over: Why does high school suck? Who will I sit with at lunch if I ditch my friends? How did Steven Spielberg mess up so bad with The Lost World: Jurassic Park or is it great and I’m the problem because I’m a big fat fucking loser? Why can’t things be like it was in the evergreen summer of 1993, when the White Sox were good, Sega was king, I wasn’t too old to go to the public pool, Jurassic Park was sweeping the nation and my friends weren’t juvenile delinquents? I was in pain. For example, there was a kid in my group we sometimes would call “hamster boy” because he looked like a hamster. Then he supplanted me in the food chain because drugs. It’s sobering when your power ranking is now below the kid who you once laughed at for playing Magic: The Gathering all day. Stupid hamster boy. 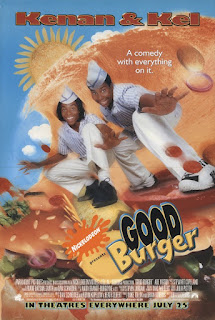 So when Good Burger came out, I was in a quandary. I wanted to see it, but I certainly wasn’t going to risk further social ridicule by asking one of my friends. I was also 15, so I was embarrassed to ask my parents to see a Nickelodeon production. Instead, I waited. It killed me knowing Good Burger was out there and I didn’t have a way to see it without feeling uncomfortable. When the movie came out on VHS for rental in the spring of 1998, I rushed to rent a copy. The movie was a tonic and should be spoken in the same breath with Pee-Wee’s Big Adventure. It’s a zany, irreverent, silly, weird work of a director (Brian Robbins) who would later make another classic of my high school years, 1999’s Varsity Blues. When I re-watched Good Burger for the purpose of writing this column, I was moved because I realize that in some ways this movie is a cinematic representation of how my sense of humor works. It’s a movie that gets me. It felt like the friend I needed back in 1997, if for no other reason than to validate that I wasn’t an outcast but rather just a weird guy who probably should have been a star on Nickelodeon.

As much as I love movies, I’ve never thought I could make a movie myself, nor had the desire really. When I come up with ideas for films or scenes of films in my head, they are often trite and nowhere near up to the level of even the most pedestrian Hollywood product. But I can say, without a doubt, that if I were to take a crack at writing a screenplay, it would probably wind up being a lot like Good Burger.

Now let’s get into some specifics about the film itself. It stars the comedy duo of Kenan Thompson and Kel Mitchell (both never better), who star in a feature-film adaptation of their popular skit called “Good Burger” which came from the Nickelodeon sketch comedy program All That, a show I adored that also launched Amanda Bynes, who looks like a white Marki Bey (this is a joke only for Patrick Bromley). The story is of a burger dive named Good Burger that faces financial ruin when a big bad called Mondo Burger opens across the street. Mondo Burger is led by a tyrant who has an array of lackeys and they all wear purple jumpsuits and take their jobs way too seriously. Sound familiar? That’s because the movie Dodgeball ripped this idea off seven years later. Respect your elders, Ben Stiller. 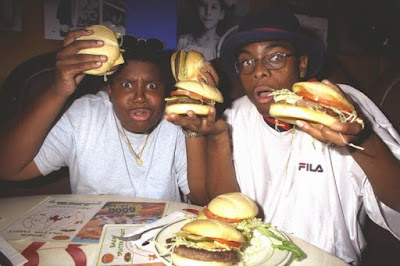 Kenan & Kel are ably supported by the talents of Abe Vigoda (who has the classic line “I think I broke my ass!”), Sinbad and the scintillating Linda Cardellini, who plays a mental patient that meets Kel’s character, Ed, when he is locked up in an asylum by Mondo Burger so that they can steal his secret sauce recipe which is keeping Good Burger afloat. The sauce is that good! Like, it’s THAT GOOD! So the stakes are high is what I’m saying. The film also features cameos from Shaq (because dunks), Robert Wuhl (because your parents watched Arli$$) and Carmen Electra, who plays a high-end hooker on retainer by Mondo Burger for the purpose of seducing Ed to get the secret sauce out of him. This movie’s got a couple entendres. Quick aside: I developed a massive crush on Carmen Electra because of this movie. A year and a half later, I went on a field trip with my German class to Chicago’s Christkindelmarkt, got bored and Ferris Bueller’d it to a record store with three friends where I bought a 1999 Carmen Electra calendar. The kid who asked for our bus meet-up time got it wrong (our teacher told us in German, which was dumb of him to expect us to know German) so we were an hour late. We all got in trouble. I got in the most trouble because I said we never left the Christkindelmarkt even though I was holding a bag that contained a 1999 Carmen Electra calendar, which was not for sale anywhere at the Christkindelmarkt. My German teacher, Herr Gabbey, yelled at me because he was worried that something bad happened to me being that I was just a kid in Chicago (or so I’m told that’s what he was yelling, it was in German so it just sounded like a German yelling at a Jew to me #NotCool #WorldWarIIMeansICanDoAnything), but what he didn’t understand was that it was worth getting in trouble for. This is a 1999 Carmen Electra calendar we’re talking about. #UtahGetMeTwo 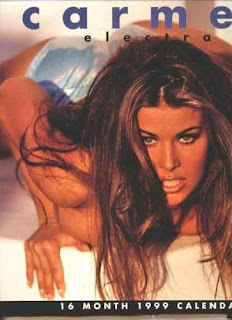 Good Burger has a banging soundtrack, some hilariously random jokes that still work (none funnier than Kel’s response after Kenan gives a heartfelt monologue about his father abandoning him) and a sequel that never was. What’s that you ask? There was a sequel? Yes and no. There was a sequel script written by Steve Holland named Good Burger 2 Go. which was turned down by Paramount for unknown reasons (but really, it was probably because Good Burger didn’t make that much money). The screenplay was turned into a novel, which I just bought on Amazon for $1.99. The synopsis (involving Ed in Paris and there’s kidnapping, etc.) doesn’t set my world on fire but it’s only 160 pages so it will be the longest novel I’ll read in years. Good Burger is available in HD on Netflix but has not received proper Blu-Ray release. Hopefully, Paramount sees the error in their ways and releases an anniversary edition this year. After Wishmaster and Tales from the Hood, this is the new Holy Grail.