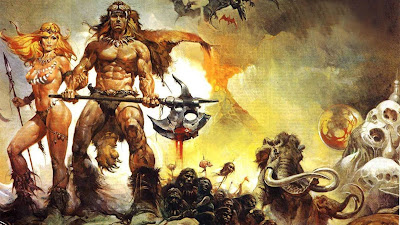 Time for another round of the crazy trash goodness I've been soaking up lately. 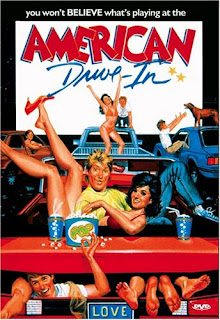 First up is the 1985 "comedy" American Drive-In, co-written and directed by Krishna Shah, the man responsible for 1972's weird Oedipal drama Rivals. It's an ensemble piece about all of the wacky goings on at a drive in during a screening of Hard Rock Zombies, the movie Shah co-wrote and directed the very same year. There are young lovers, punks, a group of young kids on bikes (one of whom is played by new FTM favorite Danny Nucci!), an uptight would-be politician trying to make a pot bust, a hooker on the job, a pair of old ladies and a family of extremely heavyset people literally eating handfuls of spaghetti (among everything else). People fight, people fuck, people even sometimes watch the movie.

I have no idea what to make of American Drive-In except to say that it does something I really love in exploitation cinema, which is that it lets a foreign-born filmmaker try to approximate his or her ideas of what American movies are. Both the performances and the humor are pitched at the level of a Troma production, all cartoon cutouts of characters who mug and cross their eyes -- an assemblage of stock stereotypes who behave nothing like actual human beings. Everything about the movie is heightened: there's gratuitous nudity and unearned emotions near the end, when Emily Longstreth of Private Resort and The Big Picture fame, sporting some of the best shorts ever committed to film, climbs up onto the drive-in screen and holds a gang of punks at gunpoint as the rest of the patrons cheer her on.

How did we get here? I'm glad you ask. At a certain point, American Drive-In gets uncomfortably rape-y and violent as Longstreth is attacked by the punks, who then proceed to beat her boyfriend nearly to death. It's totally out of place tonally with the rest of the film, which is as broad and as dopey as they come, but further speaks to the kind of heightened sensationalism offered by exploitation, amplified even more when a non-American director attempts to replicate what he or she has seen in American movies. Something is almost always lost in translation, but that's where the magic happens. By the end, Shah is flying helicopters into the drive-in and staging wacky car pileups while people are just openly fucking in the outdoors -- his version of going big or going home.

But for its few flourishes, American Drive-In fails to really distinguish itself. It's too garish and stupid to be any real fun while lacking the inspired dementia of other early '80s exploitation comedies like Screwballs or Joysticks. It mostly stands out for two reasons: first, it is the acting debut of Ellen Albertini Dow, who became a fixture in comedy films in the late '90s; she's the old lady who pays Adam Sandler in meatballs in The Wedding Singer and Disco Dottie in 54. Second is the theme song, written by Paul Sabu and performed by Terry Wood. The imitation Go-Gos chorus is impossible to shake. 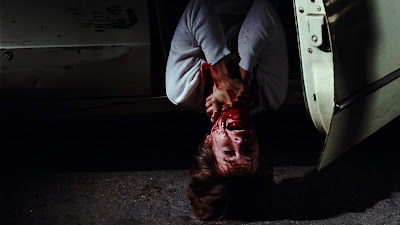 Keeping with the drive-in theme, I checked out Drive-In Massacre thanks to the new Blu-ray from the great folks at Severin Films.  The story, such as it is, concerns a series of murders that take place a California drive-in theater and the subsequent investigation by a pair of police officers (Bruce Kimball and John Goff, who also co-wrote the screenplay alongside famous character actor George “Buck” Flower [!], also appearing in a small supporting role). There are a handful of suspects, including a homeless vagrant named Germy who hangs around the theater doing various odd jobs (played by Douglas Gudbye), a peeping tom who goes to the drive-in to spy on couples getting it on in their cars (Norman Sheridan) and the drive-in's jerk of an owner (Robert E. Pearson), a man who hates his job and all of the customers. No points are awarded for guessing the killer’s identity, mostly because it’s totally impossible.

Despite a trim runtime of only 74 minutes, Drive-In Massacre feels long. This is because the film follows in the grand exploitation of padding out 20 minutes of “good stuff” with long scenes of dialogue and exposition, presented here in the guise of the police investigation that makes up the bulk of the film. There are just a few murder scenes spread here and there — the “massacre” in the title might be overstating things a bit — and they’re not all that imaginatively staged. The first, and most graphic, is probably the best: a character reaches out the window of his car to adjust the speaker and loses his head at the blade of a sword, the killer’s random weapon of choice.

Other deaths, meanwhile, are usually stumbled upon after the fact; if there's one thing we horror movie fans love, it is a filmmaker depicting the scene of a crime but not the crime itself. This leaves most of the scenes to be handed over to the two cops played by Kimball and Goff, who, to their credit, really make for convincing detectives. We don’t know much about them as characters at all, and in the movie’s worst scene they go “undercover” as a couple of lovers at the drive-in, requiring one of them to dress in drag and giving way to a number of gay panic jokes (it all smacks a great deal of the original Town That Dreaded Sundown, a movie this one resembles in tone and feel). It’s a scene that’s broadly comedic in a movie that otherwise doesn’t have much of a sense of humor.

I liked the performances of the two cops and the authentic '70s drive-in feel (the movie was shot at a real drive-in) enough that I had an ok time with the movie and even found myself becoming somewhat invested in finding out the identity of the murderer. But when I picked up on the Town That Dreaded Sundown vibes, I should have seen the ending of Drive-In Massacre coming. On the one hand, it feels lazy and annoyingly unsatisfying. With a little distance, though, I've come to appreciate the weird decision director Stu Segall makes. There are a thousand films that would have wrapped things up in an obvious way. That this one doesn't sets it apart. 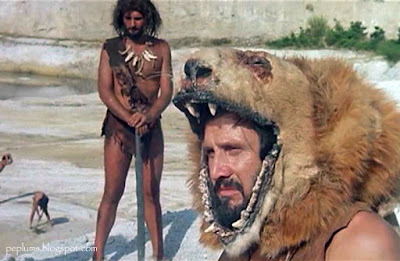 Ah, here we go. An Italian rip-off of Quest for Fire, Umberto Lenzi's Ironmaster (aka La guerra del ferro) is my kind of crazy. As a young kid, I begged my mom to let me watch Quest for Fire on TV, I think because I was drawn to the makeup the actors were wearing in the pictures I would see in TV Guide. I don't think I would have liked or understood the movie at age 7 or 8. The movie I was hoping it would be is Ironmaster, which has zero concern for shit like "historical accuracy" and instead features shiny-chested, ripped as hell cavemen, sexy cavewomen with teased hair and full makeup, cave mutants, ape monsters and so much more. I would say that it's everything the kid me would have wanted to see in a movie but that would be bullshit because it's everything the adult me wants to see, too.

Director Umberto Lenzi, credited here as "Humphrey Milestone," is a skilled enough craftsman that Ironmaster photographs and cuts together effectively, though there is a roughness and crudity to it all that I actually like. Lenzi has no finesse, but I don't want finesse in my fantasy film about two warring tribes of cavemen (one led by chiseled hero Sam Pasco in the world's worst wig, the other by Italian exploitation mainstay George Eastman wearing a lion head) discovering steel and trying to kill one another with new weapons. I want big slabs of human smashing into one another with big slabs of rock and iron. I want actors who look like they're right out of a Frank Frazetta painting. I want a memorable score, provided here by composers Guido and Maurizio de Angelis. I want over the top gore and a bunch of fantasy nonsense -- maybe not at the impenetrable levels of, say, Lucio Fulci's Conquest, but enough that most American filmmakers would feel self conscious or embarrassed about including it. Ironmaster delivers all of these things. This is a movie I'll be going back to a number of times. 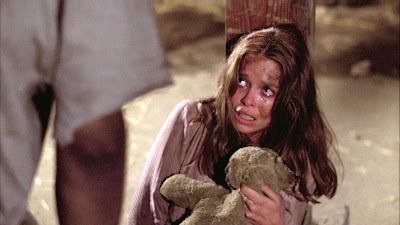 The best of this group is Danny Steinmann's 1980 horror film The Unseen, starring Barbara Bach as a report who, along with two of her crew members, comes to a remote town to do a story and is put up in a farmhouse by weirdo Sydney Lassick. There, the women are picked off one by one until Bach comes face to face with The Unseen, which is actually totally seen and turns out to be Flounder rendered unrecognizable in proto-Sloth makeup.

A word about FlounderSloth. I know that by 2017 standards, the character is offensive; Stephen Furst plays a developmentally disabled man who is treated either as pitiable or like a monster. I cannot excuse the decisions Danny Steinmann made in writing the screenplay except to say that Steinmann gotta Steinmann, and that by the standards of his later work The Unseen almost comes off as "tasteful." But I also have to say that Furst is really, really good in the role, with a physicality that feels both natural to the character he creates and completely unpredictable. Like with a lot of "monster" movies (gross as it may seem, The Unseen treats FlounderSloth like the monster for most of its running time), our sympathies change once we are confronted with the monster face to face. It's one thing to fear him in theory when it seems as though he's killing innocent women off camera. It's something else to understand there is more to the story. The movie actually reminded me of last year's The Boy, a horror film I like more than most people, except that The Unseen does something different and even more interesting with its reveal.

This is especially surprising coming as the film does from writer/director Steinmann, who is credited here as Peter Foleg perhaps to distance himself from his previous feature, the 1973 hardcore porn High Rise (though he was credited on that one as "Danny Stone," so the theory doesn't really hold water). As someone who really enjoys both Savage Streets and Friday the 13th: A New Beginning, I guess you could say I'm a Danny Steinmann fan. The Unseen might be his best movie. It's certainly the least sleazy, even if some of that does find its way into the picture. The setup is handled with creepy dread; the payoff worth the wait. Strangest of all is that the movie is totally devoid of the kind of idiotic, silly characters that are all over his Friday the 13th entry five years later, making me think there's some sort of Flowers for Algernon thing going on where the longer his directing career lasted the more it reverted back to his hardcore roots. The Unseen is a really solid little horror movie. In the words of the great Gene Shalit:
"Don't un-see The Unseen!"