An Appreciation of Lowriders 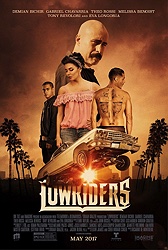 I’m in the goddamn car club, aren’t I?

Lowriders is so up my alley. Through my affinity for the Fast and the Furious franchise, I’ve realized I might be a gearhead who never had the balls to be a gearhead. It’s a world I want to live in, even though I technically could live in it but decide not to. I think it’s because I would have no idea what I’m doing and I avoid most situations where I feel I’d look foolish. But in the prism of a movie, you can be a fly on the wall and also an expert by proxy of the film’s characters. That’s one of the joys of film: to temporarily live the lives that create a spark in us without a long-term commitment. A daydream projected on screen. Do I want to put in the time and money to build hydraulics into my car? Absolutely not. Do I want to sit upfront and cruise the boulevard with Lowriders co-star Melissa Benoist wearing fishnets, too much makeup and a nose ring? More than anything else in the world. 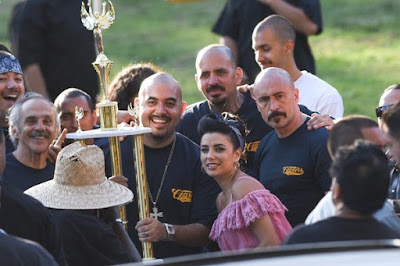 The plot in brief: Danny (Gabriel Chavarria) is a young street artist who is craving a way to express himself through his work. Meanwhile, he’s being pulled in two different directions by the more alpha-males in his family – his father, Miguel (played by Demián Bechir), who is the owner of a car club and obsessed by lowrider culture, and Danny’s brother Francisco (Theo Rossi), an ex-con that Miguel wants nothing to do with. Francisco has the street name “Ghost,” but we’ll get to that in a minute.

Lowriders is very melodramatic, a trait I enjoy even though many others do not. Telemundo is one of the production companies, and in a lot of ways Lowriders is a larger-budget telenovela for guys. It’s a macho movie with a big heart. Blumhouse co-produced the movie as well, and Lowriders is another example of what an awesome company they have turned into in the last couple of years. They are branching out of found-footage horror, taking chances on new and struggling filmmakers and giving the artists creative control. As a result, their output is exciting every time out regardless of how successful the film is (I’m looking at you, Sleight). Focusing on niche audiences at low budgets has awarded them a level of voice and specificity that is rare among the major studios and mini-majors. 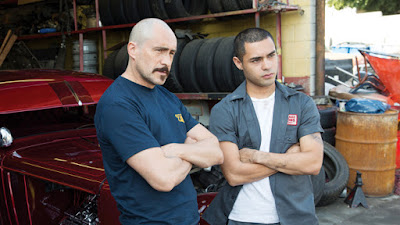 I also love Lowriders because it gives Demián Bichir another lead role. On the heels of an Oscar nomination, I was first introduced to the actor in the movie A Better Life and became an instant fan of the guy. He’s great at playing weary, respectable men and then he did that supporting turn as Bob in The Hateful Eight (which I have described affectionately as very Eli-Wallachy) and my appreciation grew even further. It’s a big chance for an actor to play a role that broadly, but he pulls it off with great humor and style. In Lowriders, Bechir might as well be playing Dominic Toretto’s father and that casting is sublime. Theo Rossi is also charismatic in the movie as Francisco (aka “Ghost”), who is called Ghost because Miguel has not referenced him by name to anyone ever since Francisco went to prison. Now Ghost is out of jail and confrontational with his father. This leads to one of two big obvious questions I have about the internal logic of Lowriders, but that’s not detrimental to my overall enjoyment of the movie. Ok, so if he’s called Ghost because Miguel won’t talk about him and he’s basically invisible to his community, then how did they decide on the name Ghost for Francisco? Were they all “We’re not talking about Francisco. He’s going to be like a ghost. Henceforth, we are calling Francisco 'Ghost.' So just to be clear…we have a name for the person we are not talking about. If you are going to talk about that person we are not talking about, please call him Ghost. Do you understand?” Another is that Danny is a street artist/a tagger/a graffiti guy and lowrider culture makes a big thing about painted murals on the hood of their cars, but it doesn’t dawn on Danny or Miguel for a long time that Danny should put his art on the cars. It’s confounding. 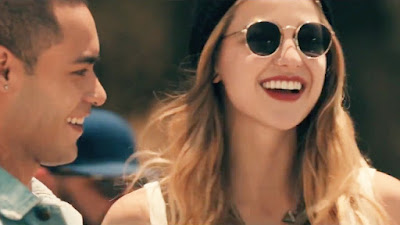 If it weren’t for the fact that lowriding is all about being “Low and Slow,” Lowriders could easily be a Fast and the Furious spinoff similar to Tokyo Drift.* Both movies focus on a single subculture of car lore and deep dive into them. If you’re a fan of the early Fast and the Furious series, you should check out Lowriders. It has a great early 2000s analog feel to it, which is the exact type of car movie I want right now after the overbearing Fate of the Furious. Bonus points also go to Lowriders because it has Hector from F&F (Noel Gugliemi) in a nice supporting role. He should be in every movie.

*Are you listening Universal? Incorporate this shit a la Split to Unbreakable. I need lowriders at that barbecue in Fast 9.
Posted by Patrick Bromley at 5:00 AM