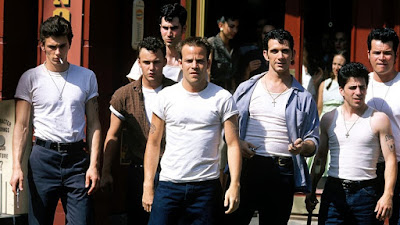 Spider-Man wasn’t the only movie to celebrate its 15 year anniversary last week.

It’s been my intention to watch Deuces Wild since its release. I remember seeing trailers and ads for the movie and planning on seeing in in theaters along with other summer “guy” movies of the day like the aforementioned Spider-Man, Star Wars Episode II: Attack of the Clones and The Sum of All Fears. Then the reviews for Deuces Wild came out, many of which were scathing, and it became easy to choose repeat viewings of Sam Raimi’s webslinger origin story (a movie I still love) over the throwback to 1950s teenage street gang pictures. Then, as with so many other films as years go by, Deuces Wild fell of my radar, never to return. Until now.

The plot in brief: Set in the summer of 1958 in Brooklyn, two rival street gangs with checkered histories square off over control of the neighborhood. The Deuces are led by Leon (Stephen Dorff), whose side is the higher-minded of the two, while their rival, the Vipers, (headed by Norman Reedus) want to expand into the drug business with protection of a local mob boss (Matt Dillon). Tensions flare even further when Leon’s brother Bobby (played by the late Brad Renfro) starts a West Side Story/Romeo & Juliet romance of his own with the sister (Fairuza Balk) of one of the Vipers (Balthazar Getty). 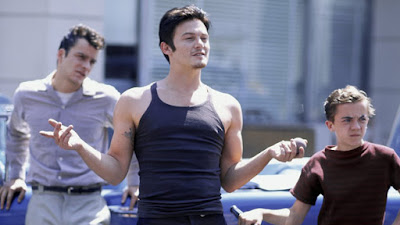 Deuces Wild is the type of movie that would be a VOD title nowadays, but in 2002 was a short-lived theatrical release. Budgeted at $10M and the sole other directing credit of the late Scott Kalvert (who had previously helmed another tale of wayward youth with The Basketball Diaries), Deuces Wild suffered critically and financially because it’s a less successful attempt to portray ‘50s Brooklyn with rose-colored glasses than something like A Bronx Tale or the young Henry Hill passages of Goodfellas. By that measure, Deuces Wild is amateurish, far too broad and plays like a movie only informed by other movies. However, on the measure of a souped-up ’50s street gang programmer that would play as the second movie of a double bill, it is a success as a curiosity and time-waster. The language is rougher and the violence is crueler, but Deuces Wild does much of the same as an old-school teen gang movie. It romanticizes its young heroes, demonizes adults as fools without honor and has the narrow vision of the turf and not the world that block inhabits.

Even if Deuces Wild is not objectively good, it is the type of movie that is very watchable. Although distributed by MGM/UA, this is such a New Line Cinema movie and that’s a style of filmmaking for which I grew up with quite a bit of fondness. I loved that studio’s ‘90s period of pulpy, genre filmmaking, and Deuces Wild feels like the dying breath of the studio that would later change its identity with their big gamble on The Lord of the Rings series. Director Kalvert goes crazy on New Line flourishes like lightning storms to underscore brawls, dramatic slow motion photography and blustering teen angst. It’s peanut butter and jelly cinema – you don’t expect a whole lot out of it but sometimes it’s exactly what you need. Deuces Wild is also very easy to leave on because it’s one of those movies where every scene is littered with recognizable faces – some of whom became big stars and others who were vetted and never took off. Check out this roster: Stephen Dorff, Brad Renfro, Fairuza Balk, Vincent Pastore, Frankie Muniz, Balthazar Getty, Matt Dillon, Norman Reedus, Max Perlich, Drea de Matteo, Deborah Harry, James Franco, Josh Leonard and Johnny Knoxville. Even in scenes that don’t work at all, one of the joys of watching Deuces Wild is seeing what bits of business its talented cast is trying to fill in on the margins. It’s like the actors were given the direction of their name and to act as hysterically cliché as possible. After a while, it becomes fun if you get into the white undershirt and tank-top spirit of the proceedings. 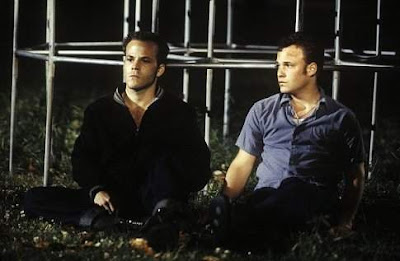 I’m glad I finally got around to seeing Deuces Wild for a couple of reasons. The first is that I enjoy these marginal films released in early summer as counter-programming to the big blockbusters. I’m talking about films like Unleashed, Redbelt or Palo Alto. As mentioned earlier, these are pretty much a dying breed theatrically, as titles like these (and Deuces Wild) are now the content to fill a VOD rental menu. They are a nice palette cleanser to more effortful blockbusters. The second reason (and one Rob can probably attest to) is that never in my years at F This Movie! have I been easier on films than I am right now. It’s something I noticed around the time of The Circle review. It might be because the world is so painful that I have a new-found appreciation for the simple pleasures of cinema. It could be that with a steadier appetite of all types of movies (i.e. big-budget and micro-budget) I’m more tolerant of imperfection and happy enough if the films give me moments of joy, even if not sustained throughout. Maybe it’s just a good year at the movies? Who knows? It’s a feeling I’m enjoying and I hope stays with me for a while (I’m sure it won’t). I mentioned this recently on the podcast, but the way I’m seeing things currently is that even if the movie's bad, I’m satisfied if it gives me a good conversation afterwards. On that note, Deuces Wild is by-and-large trash cinema but not entirely without merit.

And now I’ll finally say the pun I’ve been waiting to say for 964 words: More like Douches Wild, am I right?