Alfred Hitchcock directs this cat-and-mouse game. But who is the cat and who is the mouse?

Has there ever been another director who made their craft appear as effortless as Hitchcock? The master of the thriller was also capable of success in pretty much any genre he chose to play within, and in 1955’s To Catch a Thief, he’s playing in a lot of them. This film is very hard to classify; it has elements of suspense, comedy, and romance. Viewers are treated to exciting car chases, beautiful French vistas, and romantic interludes that rival the great love stories of film, but this is all balanced by murder, suspicion, and an impending sense of dread that our characters might not survive.

To Catch a Thief stars Cary Grant as a reformed burglar, John Robie. When we meet him, Robie has been sentenced for his crimes and swears he has given up the criminal lifestyle. When a series of robberies that follow his old MO start to occur on the French Riviera, Robie becomes suspect number one by local authorities. He vows to discover who the real thief is so he can clear his name, but the suspicion lingers among both the authorities and us, the viewers, that he may actually be up to his old tricks. Further complicating things are a wealthy American girl, Francine Stevens (Grace Kelly) and her mother Jessie Stevens (Jessie Royce Landis). Francine pretends to be cool and distant, but fireworks ignite (literally) when she’s around John Robie. The interplay between Cary Grant and Grace Kelly is worth the price of admission. 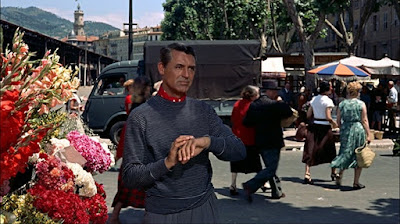 It almost goes without saying that Cary Grant is fantastic as the reformed thief John Robie. Grant is fantastic in everything, and he’s a serious contender for “Greatest Movie Star Ever.” He was a leading man for over thirty years, playing everything from romantic leads and action heroes to men on the run. He did it all, laying the groundwork for modern actors like Tom Hanks and Tom Cruise. Even making those comparisons feels crude, though, because Cary Grant was the original, and there will never be anyone else like him. He made so many movies, and he left behind scores of films that are all worth watching.

His co-star, Grace Kelly, was almost completely the opposite. She had such a brief career that we mourn how few movies she actually starred in. Officially, she appeared in 11 movies, and three of those were for Alfred Hitchcock. She famously married the Prince of Monaco in 1956, less than a year after this film opened, becoming Princess Grace and never working in Hollywood again. It’s hard to watch her in anything and not wonder what might have been. Grace Kelly is FANTASTIC. She’s beautiful, elegant, and filled with the kind of confidence and star quality that some veteran actors hope to achieve in their third or fourth decade of acting. She was a true natural, and watching her act opposite Cary Grant is one of the great pleasures of this film. 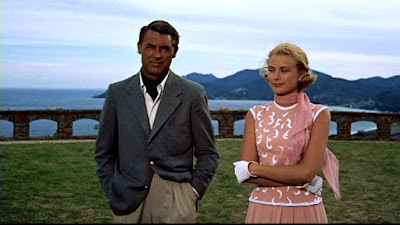 I’m not an expert on Hitchcock. There are plenty of his movies that I haven’t seen yet, especially his earlier work. So maybe I’m wrong to assume this, but it seems to me that To Catch a Thief is a bit overlooked and doesn’t get the recognition that it deserves. This is understandable because the director gave us a handful of cinema’s most enduring classics, and therefore some of his movies are destined to take a backseat to his more recognized work. I really do think that To Catch a Thief might be pretty close to a perfect movie, at least to my eyes. Hitchcock weaves us through different moods with a masterful touch, opening the film with jaunty, lavish music, then transitioning directly into suspense in the span of seconds. He has us laughing out loud and then clenching our fists in anxiety. He has us falling in love with his leads and then suspecting them of criminal behavior. Hitchcock is always great, at least in everything I’ve ever seen from him, but he actually seems to be having FUN here. There’s a whimsical element at play during the entire film, as if we’re constantly being winked at. This movie even features one of his most obvious and ostentatious cameos. He might as well be blowing a raspberry at us. This movie is SO MUCH FUN.

One of the reasons things work so well is because the screenplay itself is fantastic. One of Hitchcock’s best screenwriters, John Michael Hayes, adapted the story from a novel by David Dodge. Hayes is the same guy who wrote the scripts for Rear Window (1954), The Trouble with Harry (1955), and The Man Who Knew Too Much (1956). His script for To Catch a Thief is electric; The repartee between Cary Grant and Grace Kelly is the kind of stuff that makes you lean forward in your seat so that you can follow every single word. It’s clever, witty, and acerbic. There’s a scene in which they picnic on a mountainside overlooking the Riviera, and Kelly takes out some chicken and asks Grant “Breast or leg?” Grant quickly replies “Your choice.” Even ancillary characters get cracking dialogue, such as Grace Kelly’s mother, who gets to deliver lines like “Sorry I ever sent her to finishing school. I think they finished her there.” Hitchcock makes sure that the lines are delivered rapid-fire, in the style of characters from some noir film. This gives these scenes a game-like quality as his leads try desperately to stay one step ahead of the other. 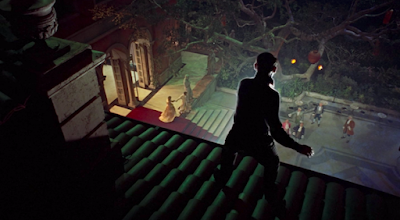 There is a third star in this film, and it’s France itself. At times this movie feels almost like a travelogue, and Hitchcock made sure to capture the beautiful landscapes in stunning VistaVision, a process introduced in 1954 that shot in a higher resolution of 35mm. This movie is gorgeous. We get beautiful beaches and the ocean, but also the cityscapes and back roads of Monaco, Cannes, and Saint Jeannet, all in full color and all in beautiful widescreen. You’d be hard-pressed to find scenery this lush and exotic outside of a James Bond movie. Speaking of Bond, I can’t help but think that Cary Grant has some Bond qualities himself in this film, and could have been an international spy had the series began in the 1950s instead of in 1962.

To Catch a Thief absolutely feels timeless, and because the film frequently bends genres, it’s one of those movies that you can watch any time, no matter your mood. It feels dangerous, exciting, and romantic, but more than anything, it feels fun. I’m not sure how often fun is a quality that we ascribe to Alfred Hitchcock, but he certainly knew how to imbue his films with qualities that keep us coming back again and again. When we mention Hitchcock, I suspect most of us think of Vertigo, North by Northwest, Psycho, and The Birds. In 1955, Hitchcock had yet to make any of those movies, meaning his greatest achievements were still ahead of him. But his smaller successes, such as To Catch a Thief, still shine like the diamonds they are. Smaller, maybe, and less praised, but diamonds nonetheless.

Email ThisBlogThis!Share to TwitterShare to FacebookShare to Pinterest
Labels: 1955 movies, alfred hitchcock, back to 1955, cary grant, grace kelly, to catch a thief