Off the Shelf: Caltiki the Immortal Monster (Blu-ray) 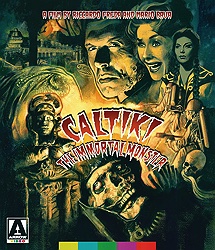 The Italians do their take on The Blob and make it scary.

For as much fun as the 1958 sci-fi horror movie The Blob can be -- our very own JB is a huge fan -- I would be hard pressed to say that any of it is actually scary. It's goofy and colorful and has a lot of spirit in its best moments, but even the filmmakers seem to know that it's nearly impossible to make a mass of strawberry jelly terrifying. Well, leave it to the Italians to make a movie very much like The Blob but to make it more atmospheric, more violent, and, yes, scarier. Director Riccardo Freda's 1959 effort Caltiki the Immortal Monster (though referring to Freda as the director may be overstating things; more on that in a minute) drains the color from The Blob for a feature shot in shadowy black and white. It drains the fun, too. While it is a creepier movie and more effective at scaring an audience, anything in Caltiki that doesn't involve the monster is less entertaining than The Blob. I guess you just have to decide what matters more. 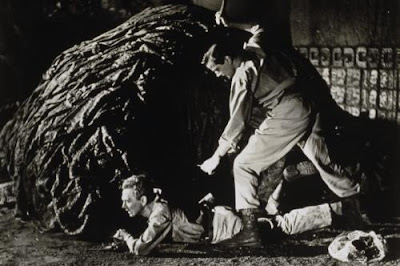 An archeology expedition discovers a cave containing a statue of the ancient Mayan goddess Caltiki. Also in the cave is a large pool of water littered with skeletons, each clad in valuable gold jewelry. While diving to retrieve the gold, a member of the team is attacked and dissolved down to the bones; a second member is nearly swallowed by the enormous, amorphous blob that appears as if out of nowhere. His arm is trapped inside the blob but he escapes and is hospitalized, his arm dissolved. As the infection spreads within his body, the piece of the blob removed from his body begins to grow inside a laboratory at an alarming rate. Before you know it, a new blob is attacking the city, eating anything that gets in its way.

The most noteworthy aspect of Caltiki, a movie not on my radar until Arrow's new Blu-ray release, is that it may or may not be the first feature directed by the godfather of Italian horror, the great Mario Bava. Hired as the film's cinematographer, Bava eventually replaced director Riccardo Freda, who left the movie at some point during the production, reportedly to allow Bava the chance to step up and direct. How much of the movie Bava is responsible for remains in question; Freda has said it's only a few days' worth of footage, while Bava has suggested that he directed all of the special effects scenes, gore sequences and a number of other shots that were grabbed to marry his footage with the stuff Freda shot. That collaboration is, in and of itself, interesting enough to make Caltiki worth checking out for students of Italian horror, but the movie really does carry a lot of Bava's fingerprints. Like Black Sunday, it's reminiscent of a number of its American counterparts but darker, edgier and gorier. There are moments in Caltiki that feel like the direct inspiration for "The Raft" sequence in Creepshow 2 in the way that Bava/Freda show just how quickly the shapeless creature dissolves tissue to the bone. It's creepy in 2017; in 1959, it had to be the stuff of nightmares. 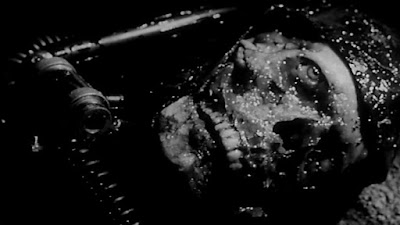 Arrow Video brings Caltiki the Immortal Monster to Blu-ray in a new 2K transfer in its original 1.66:1 widescreen. Not surprisingly, it looks great; not only is Bava's photography as stylish as ever, but Arrow's consistently solid A/V quality is once again in effect here. Though the film is often dark -- partly because of the locations used and partly because, as the special features point out, Bava may have been trying to mask the seams in the creature effects, the video presentation never succumbs to crushing or loses its contrast. Speaking of special features, that's where this Caltiki disc really shines; in addition to a standard definition DVD copy of the film, the disc contains a commentary track from historian and Bava expert Tim Lucas, the former editor of Video Watchdog. Lucas' commentaries are always obsessively researched and detailed, never more so than when he's talking about Mario Bava. There's also a commentary from Troy Howarth, a video interview with the great Kim Newman, an interview with Freda, an interview with filmmaker Luigi Cozzi, the original trailer and the U.S. cut of the opening titles. In addition to all this, there is a second version of the feature presented open matte, which provides more picture information especially during the effects sequences.

There are a lot of rough edges to Caltiki, just as there are rough edges to the majority of sci-fi horror movies of the 1950s: the story moves in fits and starts, the slow spots tend to drag and the performances are inconsistent across the cast. But the stuff that works is good enough to make the film stand out, especially as a direct point of comparison to what the Americans were doing around the exact same time with The Blob. Bava's role in the production may make the movie mostly a historical footnote, it deserves more attention than that. But if that's the best it can do, well, it's a pretty cool footnote.