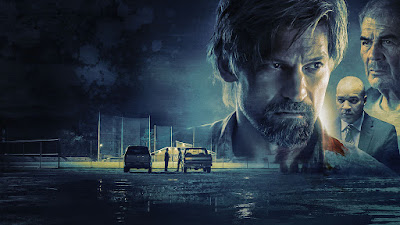 Evan Katz's follow-up to the great Cheap Thrills in on Netflix and you can watch it right now!

The history of film noir is littered with loser protagonists who begin in a bad place and only make things worse for themselves. A couple of bad decisions have ripple effects. The ripples become waves. The waves turn to blood, and before long everything is soaked in the stuff. Nobody means for things to get that bad. Nobody means for the bodies to pile up. It started out as just a couple of bad decisions. Little things. Small crimes. 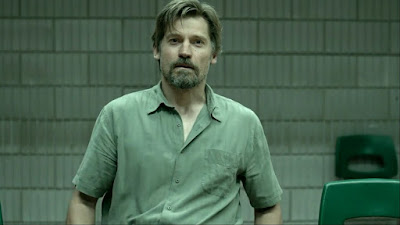 Based on the novel of the same name by Dave Zeltserman, the film adaptation of Small Crimes, scripted by director Evan Katz and co-star Macon Blair (of the great Blue Ruin and whose own excellent directorial debut, I Don't Feel at Home in This World Anymore, premiered on Netflix earlier this year), casts Kingslayer Nicolaj Coster-Waldau as Joe, a corrupt former cop getting out of prison after a six-year stint. Nothing gets better once he's back home. He's not allowed to see his daughters. His parents (Robert Forster and Jackie Weaver) don't trust him. The D.A. still wants to see him executed for the crimes that sent him away the first time. The mobster who was originally blackmailing him may spill his guts and his hothead kid (Pat Healy) wants Joe dead. And this is all just the start of it.

Small Crimes is a decent neo-noir picture both helped and hindered by the people involved with it. The cast, which also includes Gary Cole, Molly Parker and even Larry Fessenden for a scene (of course), is uniformly excellent and elevates the material even when it's just ok. Coster-Waldau provides a strong anchor, both reprehensible and possibly sympathetic -- we're never quite sure if he's a scumbag through and through or just a weak, selfish and cowardly man who's trying to dig his way out of a mess by any means necessary. At the same time, the talent of the ensemble and the combined forces of Katz and Macon Blair make me want to love the movie instead of just like it enough. While it feels very much in Katz's voice (and Blair's, based on what I've seen from them so far, including Katz's short in ABCs of Death 2), it lacks the off-kilter sense of discovery that made Cheap Thrills so exciting. The movie sets up a premise in the first few minutes and then spends the rest of its running time playing that premise out in pretty much every way we expect. 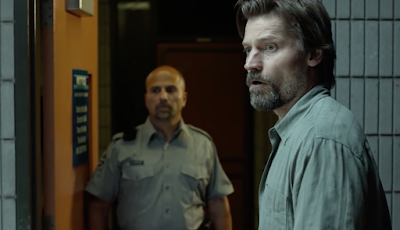 Well, not precisely as we expect. One of the aspects I enjoyed most about Small Crimes is the way that it doles out information slowly, hinting at ideas or past events without spelling them out right away (and in some cases not at all). That the screenplay is based on a novel should come as no surprise, as this is an especially literary approach to storytelling; I'm happy to see Katz and Blair carry it over for the film adaptation. When the trajectory of a movie is more or less predictable (as this one is), it helps to leave some gaps in the backstory so that the audience is still expected to keep up and say on their toes. The forward momentum has a kind of sick inevitability that I enjoy, too, and it's one that's specific to neo-noir movies. It's more a logical progression than it is a bunch of twists or surprises, but Katz knows how to pace the events as they spiral out of control so that by film's end, we're simultaneously wondering how we got here and fully understanding every single beat that brought us to this bloody point.

Small Crimes is acted well and executed well. It's a movie about which I have few complaints and yet cannot fully embrace, a disconnect I'm struggling to understand. For as much as I appreciate the fevered pitch at which it eventually climaxes, I'm underwhelmed by the denouement. The characters are interesting but their relationships seldom make any sense. The movie continues to make the case that Evan Katz is a huge talent, but it also fails to really excite me the way his last movie did.

I will say that it's super cool that we can watch the new Evan Katz movie on Netflix, though, as it continues the trend we've seen this year in which the streaming service is debuting new work from some incredibly cool filmmakers. In just the last few months, Netflix has given us new movies from Emily Hagins, Joe Swanberg, Macon Blair and Katz; even Spike Lee has a new film that debuted on Netflix the same day as Small Crimes. I know not everyone is thrilled about the way the distribution model is changing -- I'm conflicted about it myself some days -- but the fact that a wide audience is being exposed to these films without having to track them down at festivals is, for me, a pretty cool development. While the theatrical experience will always be my first choice, a film like Small Crimes is well-suited for the small screen.