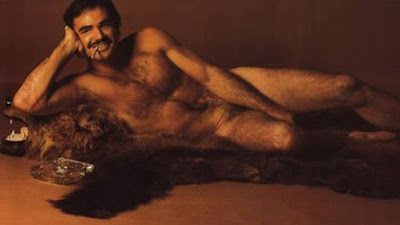 Mustaches and chewing gum for everyone.

Today is Burt Reynolds Day for #Junesploitation, and there is no better way to celebrate the career of one of the all-time great movie stars than by watching 24 consecutive hours of his films. The highs. The lows. The outtakes. 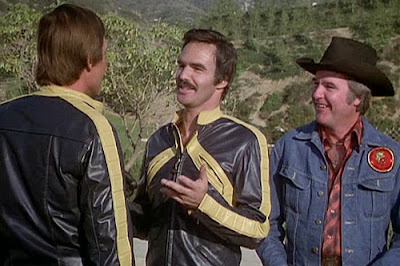 I know we should probably kick it off with Smokey and the Bandit, as it's the first and still best-loved collaboration between Burt and stuntman-turned-director Hal Needham, the Scorsese to Burt's De Niro. Instead, let's start with their second movie together: Hooper, a celebration of old-school stuntmen and features one of Burt's most laid back, "I don't give a shit" performances (even though he really does give a shit). He plays the top stuntman in Hollywood whose days are numbered because of the physical demands on his aging body and the fact that he's being pushed out by newcomer Jan-Michael Vincent. It's the same celebration of good ol' boy humor that Burt and Hal Needham made again and again, but I love how this movie celebrates some of the unsung artists of cinema, coming from a director and a star who know their way around this stuff. Hooper was one of the highest-grossing movies of 1978, proof that Burt could do no wrong in his prime. 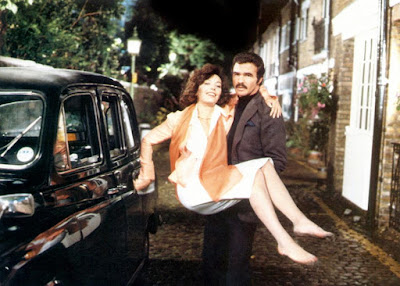 I've never seen this one and it's pretty hard to come by, but it stars my boy Burt, is directed by the great Don Siegel and is written by Larry Gelbart. There's no way I'm not watching this. Burt plays a jewel thief who falls in love with a member of his crew (Lesley-Anne Down). Provided I can secure a copy somehow, a heist picture would make a great second entry in this marathon -- a little more serious than Hooper, maybe, but not yet into the heavy shit. 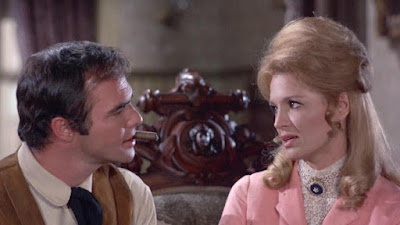 I like that Burt Reynolds made a number of westerns early in his career, nearly any of which I could have programmed into this slot. I'm going with Sam Whiskey because it's breezy and because I like the pairing of Reynolds, Angie Dickinson and Ossie Davis. I know he eventually became a bit of a joke, but goddamn if Burt didn't make some really entertaining movies in the first three decades of his career. 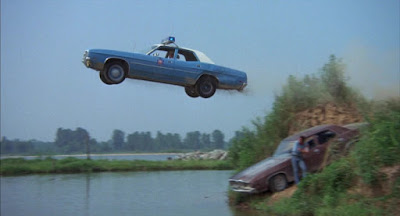 Arguably the best of Burt's early hixsploitation efforts, the first of two movies starring Reynolds as Gator McKlusky is also the better of the two (the second being Gator, Burt's directorial debut). He plays a bootlegger who gets recruited to go undercover and bring down a corrupt sheriff. Ned Beatty co-stars in the first of many collaborations with Burt. The movie is full of redneck charm and has a great two-fisted spirit about it -- perfect for a Saturday afternoon viewing. 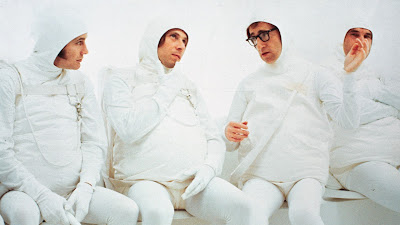 Burt has what basically amounts to a cameo in "What Happens During Ejaculation?," the seventh and final segment in Woody Allen's 1972 sex comedy anthology. He plays a switchboard operator in the control center of a man's brain (early shades of Inside Out) during sex. Reynolds' casting is more or less a stunt, but it's fun to see his swaggering masculinity played opposite a fussy Tony Randall as the head of the control center and proves that he knew to align himself with talent as he entered into the decade that would make him the biggest star in America. I've always found the movie itself to be pretty uneven, but I suspect that's because Woody Allen thinks sex is a lot funnier than I do. There are enough jokes -- and, even more, enough really funny jokes -- to make this an entertaining 88 minutes and will give us a nice breather before we head into what's next. 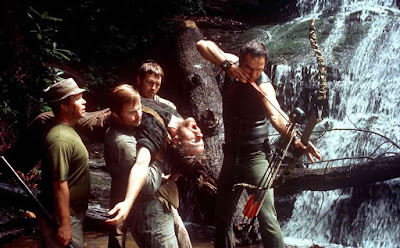 The very same year he could be seen on screen getting laughs at the expense of American masculinity, Burt starred in what is probably the definitive movie on the subject: John Boorman's Deliverance, an adaptation of the James Dickey novel. Burt and his city friends go on a canoe trip in the Georgia wilderness, not realizing just how unprepared they are to take on both the elements and the locals. Unfortunately, popular culture has reduced Deliverance to "Dueling Banjos" and a rape joke over the last 40 years, which robs it of its power as the greatest survivalist horror film ever made and a true nightmare of displacement. Burt's casting as the group's alpha is genius given his profile in American cinema; until Boogie Nights, this would remain his greatest performance. While thrilling filmmaking, it's a tough watch. We're going to need a palette cleanser after this one. 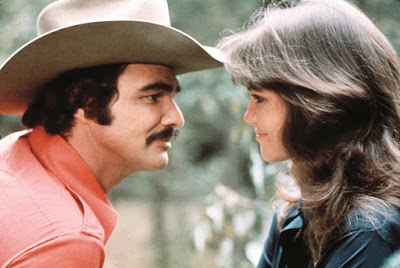 And here it is! The first and most famous of all the collaborations between Burt and former stuntman-turned-director Hal Needham (here making his debut behind the camera), Smokey and the Bandit is both a super fun and entertaining car chase movie and the film that taught Burt Reynolds that he need only coast on his charm to have a big box office hit. It worked here, but would prove to be his undoing over the course of the next decade. The plot is simple: Burt is the Bandit, a fast driver who takes a bunch of money to haul a bunch of beer from one place to another. Burt distracts the cops (Jackie Gleason, having a great time) while his buddy Jerry Reed drives the truck full of beer. Yes, it's dumb, but it's impossible to dislike. Plus, OMG Sally Field in this movie. I mean, OMG Sally Field now, too, but OMG Sally Field in this movie. To get a sense of just how popular this movie was, the only film to outgross it in 1977 was something called Star Wars. 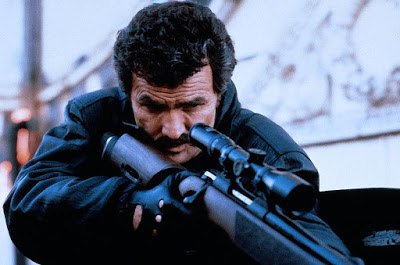 The heyday of Burt's career was behind him by the mid to late '80s, resulting in a series of action movies that felt increasingly cheap and schlocky -- stuff like Malone, an adaptation of William Wingate's novel Shotgun (anyone else noticing how many of Burt's movies began as books?). He's a former CIA operative who stumbles upon a sleepy Oregon town and finds lodging with Scott Wilson and daughter Cynthia Gibb. Cliff Robertson is the asshole politician trying to take over the town and run Wilson out of business, so Burt fights back. It's a movie we've seen dozens of times and Burt seems actively bored on occasion, but there's enough '80s action movie charm and the kind of no-bullshit attitude that marks the best stuff of this period of Burt's career to make me really enjoy it. The later it gets and the longer we've been watching these movies, the less we want to be challenged to really think. Malone fits that bill. 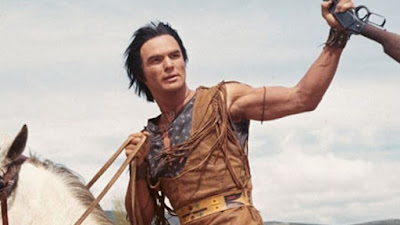 Seeing as Burt never made any horror movies that I can program overnight, we'll have to make do and at least watch something Italian: this terrific spaghetti western directed by the great Sergio Corbucci. Burt is totally miscast (and dubbed!) as a Native American who seeks revenge against the bandits who slaughtered his tribe. Quentin Tarantino borrowed part of Ennio Morricone's brilliant score for Kill Bill, because of course he did. Burt trashed this one in his recent memoir, because of course he did. I love it, because of course I do. 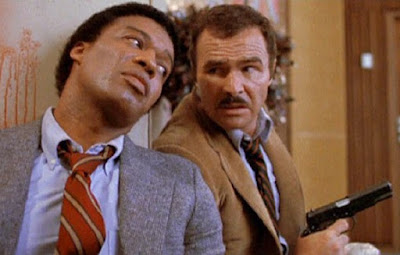 Much as I enjoy Burt's Hal Needham comedies of the late '70s and early '80s, I'm much more a fan of his violent '80s cop thrillers like Malone, Heat, Stick and, best of all, Sharky's Machine. Based on William Diehl's crime novel of the same name, the movie casts Burt as the titular Sharky, who gets involved with a hooker (Rachel Ward) while trying to take down a crime boss. This is Burt's best work as a director -- a little overlong, but tough and violent and sleazy and badass. Bernie Casey almost steals the whole movie from my boy Burt (in particular during a scene after he's shot and won't stop talking to Sharky, who is attempting to give chase), but this is ultimately Burt's show. He's generous in the way he showcases the ensemble, but it's his grit and determination that carries us through the plot. I love this movie. It's my favorite Burt. 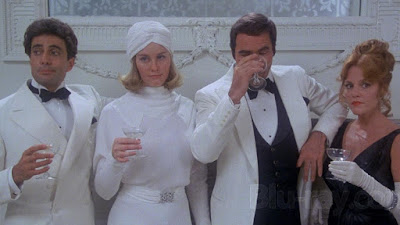 The second movie in the lineup I've never seen, but this one comes highly recommended by our own JB. Besides, how can I not program a Burt Reynolds musical? One that's a tribute to Old Hollywood? AND co-stars both Cybill Shepherd and Madelin Kahn? I almost don't need to know anything else. Even as an experiment, I need to see this. I originally programmed Cannonball Run in this slot for some early morning brainlessness, but we've already watched a couple Hal Needham joins and I would rather mix it up, even if 5 a.m. might not be the best time to do so. 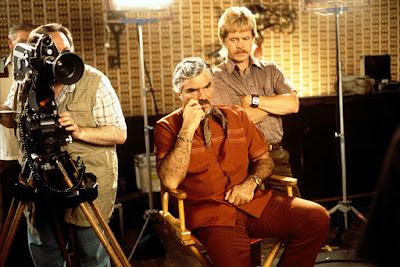 While it may break my heart not to have the time to program stuff like The Man Who Loved Cat Dancing or Stroker Ace, there is no other way to end this Burt marathon than with Boogie Nights, not just one of the great American movies of the last 30 years and one of my all-time favorites but also the culmination of Burt Reynolds' entire career. His iconography is so linked to '70s cinema and his status as a sex symbol so legendary (see the photo at the top of this piece) that the movie manages to self-reflexively comment on Reynolds' filmography without ever commenting on it, exploiting his persona without ever exploiting it. His work as Jack Horner, an adult filmmaker who is at the top of his game in the '70s but spends the '80s trying to find his place within the industry, is the best performance of Burt's career. He even received a Best Supporting Actor Oscar nomination for his work. It's too bad he shit talked both the movie and PTA, with whom he famously almost came to blows during production. This is, I suspect, the last great Burt we're going to get, but we're lucky to have it.

Email ThisBlogThis!Share to TwitterShare to FacebookShare to Pinterest
Labels: 24 hours of movies, burt reynolds, deliverance, junesploitation 2017, smokey and the bandit