More tales so hot you’ll be begging for late fees.

Hello from the Other Side

My store manager insisted we say “hello” to everyone who walked in the door. The assistant managers did not. So when I worked shifts with Gordon, the store manager, it went like this...

By a couple hours in my voice would get tired and hoarse. By the end of a seven hour shift I was just wheezing the letter H. It was the closest I ever got to being Olivia Hussey answering the phone in Black Christmas.

Around the time I started working at Blockbuster, corporate installed a kiosk to replace the paperback Video Log. The digital iteration was similar to Netflix, where you rate a few movies (from one to five) and it would recommend some titles for you. It robbed Blockbuster Video hours of my productivity. It would be like Beverly Hills Cop (5), Kickboxer (3), Baby’s Day Out (1), Arlington Road (2), Aladdin (4)…we recommend you rent Music of the Heart. I would be like “Get the fuck outta here” and the kiosk would be all “No I cannot.” 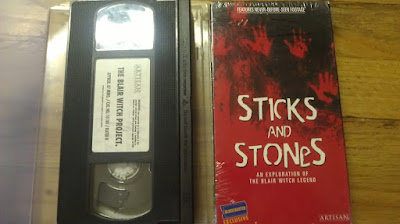 In conjunction with the home video release of The Blair Witch Project, Blockbuster also stocked two spinoff documentaries titled Curse of the Blair Witch and Sticks and Stones, the latter being a Blockbuster exclusive. Blair Witch rented well around Halloween and for a week or two after, but then it didn’t move. Curse of the Blair Witch even less and Sticks and Stones took over the store like bed bugs. We must have had a couple hundred copies of Sticks and Stones and we couldn’t get rid of them as rental, sell-thru or previously viewed. They sat there and sat there for months until one night my shift manager, Kim, said she got a memo from corporate and our instruction was to destroy all remaining copies of Sticks and Stones. I asked “Like, throw them away?” and Kim said “No, break them after work with Steve out back.” Steve and I looked at each other like “This is amazing.” I asked Kim “Can we invite friends?” She said no, which was a bummer. In any event, we smashed many, threw more (some on the roof which might still be up there [it’s currently a Sprint store] and burned one). This was my fight club.

I brought in Dunkin Donuts Munchkins one Sunday morning because it was traditionally my favorite shift of the week and I thought it would be a nice treat for everyone. When no customers were in the store, me and the other CSR (Customer Service Representative), Taniel, started to throw Munchkins at each other. And then it happened. I threw a Powdered Munchkin the entire length of the store (at Taniel), he ducked and it instead hit my assistant manager, Russ, square in the forehead. A puff of powder popped off his face. It was like a center field throwing out a runner at home from the warning track when you just intended to hit the cut-off man at second. It was like Barry Pepper shooting the Nazi through his sniper scope in Saving Private Ryan. I was legend. Russ acted really shitty towards us the rest of the day.

Late in my Blockbuster run, a Hollywood Video opened about a mile away with less stock but pricing that drastically undercut ours. I asked my store manager if he wanted me to go over there and spy and he said no. Not thinking this was the correct course of action, two coworkers and I had a plan to go in there and do a run by (i.e. knocking over cover boxes and yelling “Gold and Blue Through and Through” while in our Blockbuster polo shirts). The message would be “Welcome to the neighborhood! and also “Get out of our neighborhood!” We never did it, though. 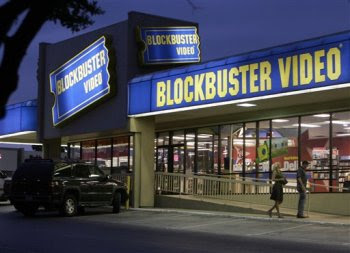 The other CSRs and I would sometimes have our girlfriends come in to visit us at work. This always meant that the CSR whose girlfriend was in the store was practically useless for about an hour. It was very much “How you expect me to check Found-On-Shelf when I’m trying to be in love right now?” One day, my girl Elana came in and we went to the sell-thru aisle and started kissing. She put her arms around my neck and I put my hands in her back pockets and we talked about prom and stuff. After Elana left, an older CSR named Lee (who looked like if Randall “Tex” Cobb and M.C. Gainey had a baby) asked me: “She sliming your salami?” I said “No,” to which he replied “I don’t know why you’re taking her to prom then.” Even more curious, he tried to set me up with his daughter about a month later. I guess he thought I was a gentleman. I am now. At 17 though, he was wrong.

The CSR Who Shagged Me

I’m going to sound like I’m boasting, but I’ll just be honest: I was a senior in high school when I worked at Blockbuster and at the time a lot of sophomores and juniors wanted me. I was keenly aware of this. My friend Courtney, a sophomore, was having a slumber party for her sweet sixteen and it was like Lake LBJ (“No Guys”) but me and my friend Chris (the weird one, not the cooler one unfortunately) were thinking maybe if we bring over a previously viewed copy of Austin Powers: The Spy Who Shagged Me then "no guys at the slumber party" becomes "two guys at the slumber party." We go there and the girls open the door and, I’m not kidding, it was like first time The Beatles played Shea Stadium. Chris wasn’t helping much (I had to tell him to put in that $4.99 PVT tape), but I didn’t need him. I was over there in the corner with Heather all like “Now tell me whatchu wanna do with me.” KC is feeling my arm muscles and trying to touch my abs. I was Crazy, Stupid, Love Gosling that night. About an hour into the movie, Courtney’s dad shows up, previously unaware we were there and strongly encouraged me and Chris to leave. He was obviously in the right, but at the time I was thinking in my head “Let this happen, Roger. You don’t need to be here right now.” I made it a Blockbuster night.

Get on the Buster

I rented Spike Lee’s Get on the Bus once with one of my weekly five free employee rentals. Inspired by the “Shabooya roll call” sequence, I introduced that at Blockbuster one afternoon and it became a staple. It went like this: 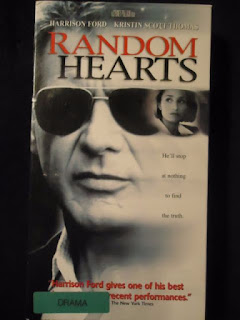 One Monday night, my coworkers and I thought we’d get out of work faster after closing by setting up wall space and cover boxes for the new releases that were coming out the next day. So, even though there were no VHS tapes behind the cover boxes, we laid out two rows of the Harrison Ford dud Random Hearts. We learned to regret this decision. For the next several hours, it was customer after customer saying, “Do you have Random Hearts?” “Can you check if any Random Hearts were returned?” “Why do you have it out if we can’t rent it until tomorrow?” Eventually we wrote “Available to rent Tuesday” on a piece of paper and taped it to the shelf which led to customers then going “C’mon, man! Can’t I get Random Hearts tonight? I got these cheeseburgers, man. I’ll suck your dick.” I was mystified. Where were these people when it was out in theaters?

The End of the Road

I went back to work at the same Blockbuster for one college winter break three years later. It was different. I was no longer the king of the store. I was just a guy. Gordon was still there, but that was about it. I used to be the Captain Jack Sparrow of the store and now I was working with nothing but Brenton Thwaites’ who did not pay me tribute. One night, I laid in bed with my girlfriend at the time and asked her if I made a mistake…if I was too old to be working at Blockbuster. She said “Yes” and rolled over onto her side. I went to go spoon her, but before I did I flipped her the bird as her back was turned.

Until next time, remember there is only one certainty…Ashley Judd movies rent very well. Don’t believe me? Try getting a 2-day new release VHS of Double Jeopardy. #GuaraneedOutofStock