The review duo that want to have an intervention with Brad Pitt.

Adam: War Machine is the new Brad Pitt war satire dramedy available on Netflix right now from writer-director David Michod (Animal Kingdom, The Rover). It tells the story of Four-star General Glen McMahon (Pitt) who is sent to Afghanistan to clean thing up before troops return home, but instead takes it upon himself to go off-script and do the only thing he knows: win a war. In this clip, McMahon and his second-in-command Major General Glen Pulver (Anthony Michael Hall) lose their cool after President Obama announces his strategy in Afghanistan, which is at odds with the previous administration where General McMahon was more part and parcel.


This scene touches on some of the more interesting elements of the story, including the clusterfuck that was Afghanistan in 2009, where no one really knew what to do because they were receiving conflicting instructions. It’s also a good representation of a lead performance by Pitt that is distracting and was a hindrance to allowing me to get involved in the story. It’s his Billy Beane mannerisms mixed with Aldo Raine’s voice with a little bit of a George C. Scott impression for good measure. It’s stupid and someone should have told him that and to just use his real voice (though maybe they couldn’t because Pitt is a producer on this film). He also does dumb over-the-top stuff like running as if he has to take a dump to, I guess, portray rigidness or openly poke fun at the character he’s playing? I really didn’t like this performance. War Machine isn’t a terrible movie (I think it’s a mediocre one, though) but it sure irritated me more than most two-star movies usually do.

Rob: The Pitt performance was part of what makes the first third of War Machine so bizarre and confusing. He feels unsure of himself, like someone is forcing him to try something in his performance that he’s not really comfortable with. The tone is another thing — it feels at first like the film is going for Coen-esque satire by way of Adam McKay, playing some things straight, poking fun at others, and guiding us through all of it with one of the worst and most distracting voice-over performances I’ve ever heard. This is some Cinematic Language 101 shit: the narrator seems to think the war is absurd. The troops seem to think the war is absurd. Only McMahon takes it seriously. So, is the movie making fun of him? How are we meant to feel about our lead? There are very few establishing character moments. It takes a solid forty minutes for us to start getting a handle on who he is, what he wants, and how he can get it. The film picks up once it sorts that out, but it may be a deal breaker for a lot of people. It almost was for me.

Adam: I think the choices at the front of the movie with his performance were all Pitt. I put the blame entirely on him. He’s a good actor, but he is capable of giving some truly bad performances at times. I mentioned his Billy Beane performance (for which he was nominated for an Oscar) and that is the most self-amused/impressed performance I think he’s given. There’s so much of that in War Machine until the last third of the movie, where he becomes more human and sympathetic. I don’t agree with his strategy (I won’t even say politics because it’s more or less about war than anything), but I felt bad for him in a way because he was put in a position to fail. He’s not the guy to do the job that the White House gave him to do and I think his coming to terms with that is interesting. You mention tone, and I agree that the movie doesn’t know what it wants to be so it’s a pastiche of biopic, war movie, satire, expose about a Rolling Stone article, etc., and it’s not particularly exemplary at any of them so it just feels like material that has been covered ad nauseum (especially from films that were released around that 2007 to 2009 time period). This and Billy Lynn’s Long Halftime Walk feel so antiquated at this point. Even though it was only eight years ago, it might as well be thirty for how much the world has changed since then. As for the narrator, it’s the worst narration I’ve ever heard in a movie. It comes from actor Scoot McNairy (who plays the Rolling Stone reporter) and he’s an actor I’ve liked in other movies, but here he makes a terrible decision to narrate as if every sentence begins “Aw, shucks...I dunno...Anyway.” And he is constantly interrupting the flow of the movie. The first thirty minutes are just him explaining shit and introducing minor characters like you’re watching Suicide Squad while listening to War Machine’s script as a book-on-tape.

Rob: It feels like a small thing to point out, but it’s such a front-and-center issue that it’s impossible to ignore. One of the things you mentioned that really spoke to me was the way War Machine approaches the dichotomy between a soldier’s perspective of war and a civilian’s. Conversations with family members who have served in the police force and armed services have given me greater respect for a soldier’s instinct that civilians interfere with war, that we complicate the objectives with our bureaucracy and our politics. I totally see how someone like McMahon would be frustrated by the half measures that tend to define our political landscape. But then there’s that great (I think?) cameo by Tilda Swinton where her character essentially calls McMahon out on his ego and overconfidence. She has to remind him that he’s a public servant and that the war is not about his glory. As frustrating as it is for them to hear President Obama call for the removal of troops before victory is achieved, the film also emphasizes (through characters like Ben Kingsley’s Hamid Karzai) that governing is a complicated and nuanced art that sometimes requires maintenance of the status quo. It’s one of the few things the film gets right because it presents no clear answers to McMahon’s frustration with the system. I wish there was more of that and less of the other weird nonsense. This movie reminds me a lot of Whiskey Tango Foxtrot, the Tina Fey film that also seemed to have a lot to say about the nature of war without really knowing how to get it out. 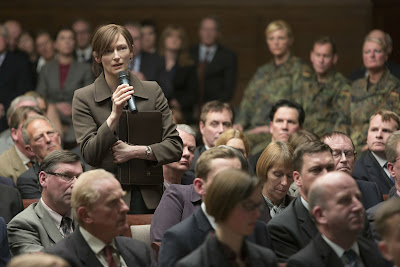 Adam: That scene with Tilda Swinton is really quite good. I loved that there’s a line where she explicitly tells the General that she knows he’s a good person and that his intentions are not from a place of bad intention, but that they are misguided and insular. I also enjoyed the scenes that Pitt has with Meg Tilly, who plays his wife. They point out a small detail (that Tilly counts how many days they are together when he’s not deployed) and it’s such an honest, heartbreaking observation. Then Pitt’s reaction to that is equally moving because he thinks she’s being the stereotype of the wife who doesn’t understand his duty when she’s not. She believes in him and she is just pointing out that their sacrifice serves the greater good. The sad part is that the situation in Afghanistan obscures what that greater good is. When War Machine plays emotions straightforward and honestly, I think it’s really good. Too often it’s from an amused remove, which I find a lot less interesting.

Rob: Exactly. It’s almost as if the film is trying to maintain an ironic distance from emotions it would be so much better off pursuing in greater depth. It has to be so heartbreaking to learn that your life’s work is largely inconsequential in the modern world (or at least considered to be so by your higher-ups). There’s that great scene where McMahon is trying to communicate the importance of his mission with the citizens in Afghanistan, and they just keep asking him to leave. It has to be such a hit on the ego to learn that no one wants the help you’ve trained so hard to provide. I don’t know. Where are you at on this one? I find that I’m enjoying reflecting on this movie more than I enjoyed watching it.

Adam: It’s a Mark Off for me, but it’s a movie I think is more flawed than outright bad. If you’re going to go Iraq/Afghanistan war movie, you should stick to The Hurt Locker, In the Valley of Elah and Zero Dark Thirty. Where are you at on War Machine? 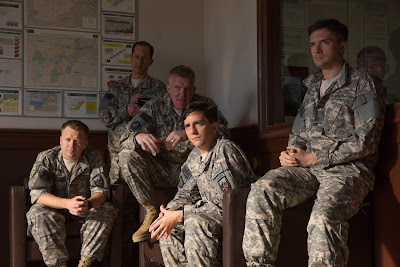 Rob: This is totally off-brand for us, but I’m actually going to go Mark Ahn on this one. It’s very tentative and it comes with a lot of caveats, but the simple fact that I’ve thought this much about War Machine means it might be worth watching for someone out there. I’m not proud of it, but there it is. What are we watching next week?

Adam: I don’t think we’ve ever had a split where you’re positive and I’m negative. I like it. BTW...how did we give 2 Mark Ahn’s to Beauty and the Beast? I think there’s a danger that when we get to talking about these movies we make them better than they actually are. How about The Mummy for next week?

Rob: Do you hate me? Is this some sort of punishment for Table 19? Ugh. Fine.

Adam: It has to be covered. Our site is a site that would cover The Mummy. You know this to be true.

Rob: Tom Cruise better run his ass off. Until next time…