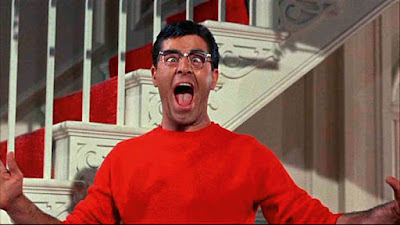 Jerry Lewis passed away this week at the age of 91. While it's not a shock, it's always sad when people pass (sometimes it's less sad) because they have family that love them, and, in the case of Jerry Lewis (and, for the purposes of this site, a few other recent artist deaths), had a massive impact on this thing that we love and which brings us to this site every day. Jerry Lewis helped change the movies.

From the moment it was announced, news of his death became a contest to see who could be the fastest to ask when we would get to see The Day the Clown Cried (stay classy, internet), or to mention that he could often be a cantankerous sonuvabitch who said terrible things about female comedians, or who could make the first "Flavin!" joke, or who could reference the fact that he was beloved by the French. The more good-hearted movie fans -- the people I tend to follow and pay attention to online -- brought up his years of dedication to charity or his role in The King of Comedy, presumably the most significant entry point in Lewis' career for a certain generation of film lovers. Some critics and writers told stories of the times they interviewed him, unsure of which Jerry they would be meeting. What I did not see many of were appreciations of his 1960s comedies -- the ones made after he split from longtime stage and screen partner Dean Martin. So I've spent the last day or two asking myself: why is that? 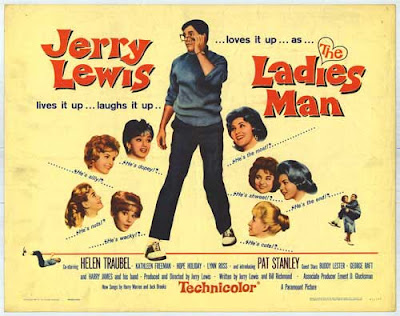 For years, Lewis' solo film career has been its own punchline. He was the guy you pointed to if you wanted to suggest that someone had bad taste or a childish sense of humor. His popularity in France had Americans scratching their heads and looking down their noses (while at the same time overlooking just how ahead of the curve French film fans have been on assessing a number of careers, including none other than Alfred Hitchcock). To say that you found Jerry Lewis movies funny was to admit to being plebeian. To this, I have only two words: fuck all that. I haven't seen every Jerry Lewis movie, but I like all the ones I have. I think they're funny. More than that, I think they're incredibly well-made and smart movies. It's bad enough that Lewis doesn't get his due credit as a performer, but he's hardly ever talked about as a great comedy director. And he was.

Today I rewatched The Ladies Man, Lewis' comedy from 1961 and the second feature he directed following The Bellboy. Whereas that movie was something of a low-budget quickie, heavily improvised and shot in a hurry so that Paramount would have a Jerry Lewis film for the summer of 1960, The Ladies Man is a much more ambitious outing. Lewis actually speaks, for one, here playing brokenhearted doofus Herbert H. Heebert. The middle H. stands for Herbert. I don't care what Roger Ebert said about funny names; I will never not laugh at Herbert Herbert Heebert. On the day Herbert graduates from college, he catches his girlfriend with another man. Devastated, he swears off women forever and commits to a lifetime of bachelorhood -- a commitment that is tested when he's hired to work as an errand boy in a women's boarding house. 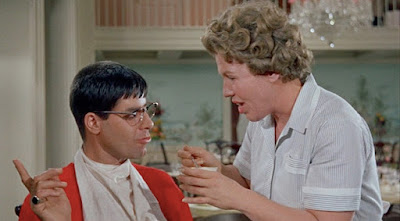 Listen. I get why people might be put off my Lewis' comic persona. It redefines broad, and his shameless, anything-for-a-laugh mugging paved the way for the likes of Robin Williams and (especially) Jim Carrey, themselves polarizing comic actors on screen. I happen to find his willingness to ignore ego and play a spaz with such reckless abandon totally endearing, particularly when you remember that Lewis is a guy who, in addition to being very handsome, can sing and dance as well or better than many of his contemporaries. With his looks and talent, he could have had a very different career. He chose this one because he wanted to make people laugh, devoting every muscle in his body to that pursuit. Forgive me if I refuse to look down my nose at that.

Mugging aside, The Ladies Man deserves to be recognized for its terrific construction. From the opening sequence, a long take in which a single noise sets off a chain reaction of physical comedy right out of a Buster Keaton movie, to the extended dance number that nearly ends the film, The Ladies Man is the rare comedy that manages to be both gag-driven and formalist -- it gets laughs not just from what happens on screen, but from the way that Lewis chooses to frame it. The movie's most impressive achievement is its set design: a massive mansion with multiple levels but the fourth wall removed, just as you might see in live theater. Lewis had the gorgeous set built to the tune of $350,000 but uses it to brilliant effect, with the camera moving from room to room and even up and down floors on a crane. It's almost impossible to watch certain sequences in The Ladies Man and not think that they inspired the filmmaking and aesthetics of Wes Anderson. 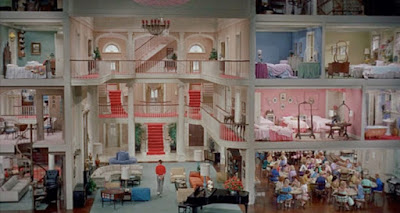 There isn't a story to The Ladies Man, nor is there much in the way of character development. It's just a collection of gags strung together by Lewis' performance, and even that has a way of changing from scene to scene depending on the needs of a laugh. Sometimes he's a clueless manchild; other times, like when he's being fed by housemother Kay (ubiquitous character actor Kathleen Freeman), he's short-tempered and outspoken. So the movie may lack some of the characteristics typically associated with "great" comedies, but in the end funny is funny. The Ladies Man is funny. Very funny, in fact, and in ways that are inventive and fresh from scene to scene -- Lewis is seldom interested in repeating a gag. They don't all land, of course, but they're never lazy. That's one of the more frustrating aspects of the criticisms long leveled against Jerry Lewis: that his movies are "stupid." The jokes may be base and his characters may be dopey, but it takes a truly intelligent filmmaker and comic mind to make a movie that seems this stupid.

If nothing else, Lewis deserves to be recognized for helping to pioneer the use of video playback so that he could see himself while he was performing on camera. Though he has taken credit for inventing the technique, a reporter for CNET discovered that patents for similar technology were filed as early as the 1940s, though it continued to be refined over time. So while he wasn't the originator of the practice, it was Lewis who helped popularize the video assist and eventually made it more commonplace on movie sets. He was an innovator and a filmmaker who thought big, as evidenced by the set and the production design of The Ladies Man. Despite already being a huge star by the time he began his solo film career, Lewis didn't coast on his success. He wasn't lazy when he easily could have been. Because of his reputation as the mouth breather's comedian of choice, it's a misconception that his output of this period is slapdash -- the 1960s equivalent of contemporary Adam Sandler comedies. You may not find him funny, but few comedians worked harder or were more dedicated to filmmaking. 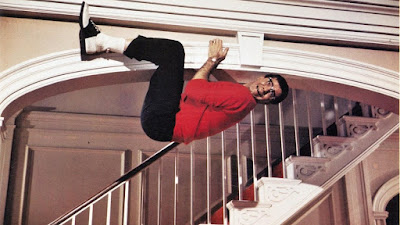 For some reason, a number of Lewis's '60s comedies are somewhat hard to come by these days. The DVDs have gone out of print and many of them have not received a Blu-ray release. They're available to rent or purchase in HD on Amazon and iTunes for around $13 each, which wouldn't phase me if it was for discs but which seems high for a digital file. If you've never seen a Jerry Lewis movie but would consider checking one out, I urge you to give The Ladies Man a chance. I can't say it's his best film -- as I mentioned, I haven't seen them all -- but I can say that it's a goddamn delight and a testament to just what a talent he was in front of and behind the camera. His death has him being remembered as many things: comedy legend, humanitarian, blowhard, asshole, stooge, you name it. So many of the tributes I've seen on social media have talked only about Jerry Lewis as a person, overlooking his art. It seems like even 50 years later, there is shame in taking his art seriously. But why should there be? He took his art seriously. Let us at least honor his memory by doing the same.
Posted by Patrick Bromley at 12:00 PM