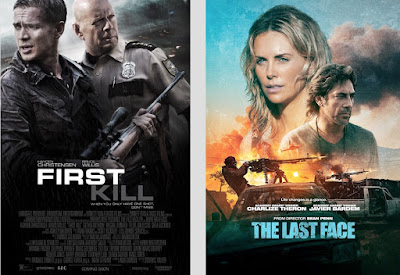 The Alpha and Omega of DTV.

The new Lionsgate Premiere label is quickly becoming one of my favorite sources for goofy nonsense. Though it occasionally sneaks out the honest winner like Imperium or Joshy, its bread and butter is in low-budget schlock like Life on the Line, Inconceivable, and Knock Knock, films whose mix of semi-competent charm and aging stars with nothing to lose speaks to the heart of what Redboxing is all about. It’s not that “so bad it’s good” ironic hipster bullshit, mind you, but rather a genuine appreciation for what movies can get up to when no one is paying attention. Along those lines, the DVD trailers at the head of First Kill (including Arsenal, a Cusack/Cage thriller I cannot wait to get my hands on) gave me every confidence that the trend would continue. I was not disappointed. First Kill is a bad movie, bad in a fascinating way that almost bears academic study. But by getting nearly everything wrong, it manages to fulfill a larger purpose as a course text in What Not To Do and almost circles back around to quality. 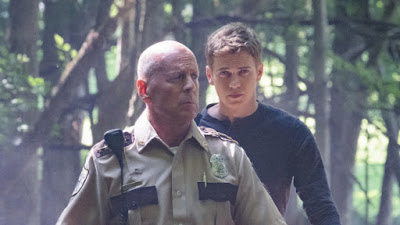 Will Beeman (Hayden Christensen) is a Wall Street executive too busy to spend quality time with his son, Danny (Ty Shelton). This absence of paternal guidance makes Danny the target of middle school bullies, and, after one incident too many, Will finally decides to bring his family (including Megan Leonard as his wife, Laura) to the rural community of his youth and teach his son to defend himself (with a rifle, apparently). During a rainy afternoon hunt, Will and Danny stumble upon two bank robbers in the middle of a deadly shootout. After killing one in self defense, Will brings the other bad hombre, Levi (Gethin Anthony, Renly from Game of Thrones!) back to the cabin so his wife can treat his wounds. Levi, predictably, kidnaps Danny and promises to return him only if Will can get his hands on the missing money. Enter police chief Marvin Howell (a sleepwalking Bruce Willis), who, for reasons that will become clear in an angry screed later, is also interested in recovering the money. Kidnapping, betrayal, revenge. You get it.

But again, everything in First Kill is bad. Nick Gordon’s (GirlHouse) screenplay wears its subtext on its text; his characters are space aliens whose stilted dialogue hits pre-designated story beats (this is our “backstory” scene, this is our “unresolved conflict” scene, and so on) without warmth or personality. Christensen — perpetually stuck with bad scripts — suffers the worst of it. With no room to show real vulnerability, his Repentant Dad on a Mission thing never works. Anthony has a bit more latitude as the family man caring for his sick mother-in-law (insurance doesn’t cover her illness — social justice is another of the film’s Important Themes), but is still overqualified. Bruce Willis couldn’t even be bothered to fix his own dialogue this time out. One take. Two days. Paycheck. That’s about as much care as anyone gave First Kill, a film that believes a child learns self-defense by watching his father murder a small town and that banks deserve to be robbed. Or police deserve to be paid more. Or something. It’s a complicated mystery worthy of further investigation. 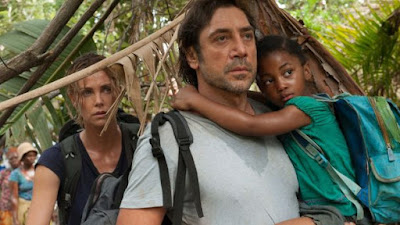 Film criticism is full of hyperbole. My Twitter feed is lousy with cineastes declaring Such and Such “the ____ ____ of all time,” and so is yours. The most. The best. The worst. It’s obnoxious. Oh, I do it, too. Don’t get me wrong. That doesn’t make it right. For one, it assumes a complete mastery of all film history, every film from every country in every language ever made in every year since the Lumiéres. Not a single one of us can boast that level of knowledge. For another, it assumes an objective viewpoint. Film is personal, subjective. It belongs to all of us and none of us. Best, worst, and most to me isn’t best, worst, and most to you. It doesn’t have to be. It shouldn’t be. And so it’s with careful consideration and great hesitation that I say this now:

The Last Face might be the worst movie I’ve ever seen.

There are a lot of reasons for this, and again, I don’t say it lightly. Hell, I just tried to sell you on the incompetent goofiness of First Kill, a movie no one cares about and no one will ever watch. The Last Face isn’t incompetent or goofy. It’s overwrought and self-important, which is far worse. It’s the most Sean Penn thing Sean Penn has ever done. It forces two of our finest actors to trade on their considerable talents for the sake of an Issue Movie that doesn’t have anything real to say about its issue. Charlize Theron and Javier Bardem are doctors in war-torn Africa who fall in love against the backdrop of unspeakable violence and poverty. Theron’s Dr. Wren is the big-picture idealist, while Bardem’s Dr. Miguel is the get-your-hands-dirty scoundrel. They bone and then break up when Miguel’s womanizing and devotion to life in a war zone conflicts with Wren’s belief that the problem can be solved with black-tie fundraisers and NGOs. Though things end badly, they continue to pine for one another over the next ten years. 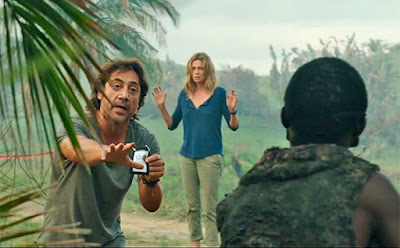 This makes The Last Face sound like an ambitious, English Patient-y epic. And it’s true that there are a few moments that should work. An emergency c-section in the middle of a jungle, for example, or a hostage situation in which the prom queen from The Purge: Anarchy forces a young boy to murder his father. But these scenes (and every other minute of its 2+ hours) are steeped in slow motion refugee porn and cringe-inducing meditations on how hard it is to be hot and talented (during one of their reconciliations, Theron literally says — out loud— “Here I go again” as she falls into Bardem’s arms). Penn and cinematographer Barry Ackroyd abuse cross-fades, dissolves, and shaky-cam to such an extent that each one loses any and all dramatic impact. The film’s narrative is more than disjointed — it’s stillborn. It goes nowhere at a snail’s pace. Circles upon circles with no escalation. I had to pause the film at the 30 minute mark and take a walk around the block because I couldn’t believe I was only 30 minutes in.

What’s more, The Last Face wastes quality character actors like Jean Reno and Jared Harris, relegating them to the background along with all the African people for which it claims to be advocating. I won’t get into the white savior debate, but the lip service paid to the issues plaguing refugees is almost laughable. They’re merely a by-product of Theron and Bardem’s abusive romance, a symbolic gesture meant to prop up the film’s Oscar bonafides. They’re an inconvenient road block in Theron’s journey to introspective revelations. And look, there’s no doubting Penn’s sincerity (his real-life advocacy is well-documented), but his perspective is seriously flawed. He believes these are real human beings we’d care about. He’s wrong. He shouldn’t be allowed to waste Theron and Bardem like this. He shouldn’t be allowed to exploit a serious issue without having more to say than “This is a serious issue.” Maybe he felt that more depth in that area would interfere with the four minute Theron/Bardem tooth-brushing scene, which is a real scene that exists in the movie. We’ll never know.

Plus, what the fuck does The Last Face even mean?
Posted by Patrick Bromley at 5:00 AM