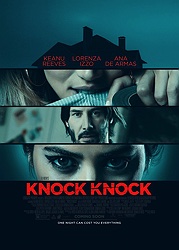 I enjoyed this movie very much and I’m a little embarrassed about that.

Knock Knock, the latest feature from writer-director Eli Roth, is an update of Peter Traynor’s Death Game from 1977. I can’t speak to how Knock Knock compares as I’ve never seen Death Game, but perhaps having a direct inspiration to draw upon as a template (as opposed to an entire sub-genre like he did with The Green Inferno) has stabilized Eli Roth in some way. Whatever it is, I’ll say that I ended up liking Knock Knock more than I thought I would and especially more than The Green Inferno. Whereas that movie was sloppy and a tonal catastrophe, Knock Knock is tighter, more streamlined as well as sexy and fun. This is undoubtedly my favorite work from Roth since Cabin Fever. 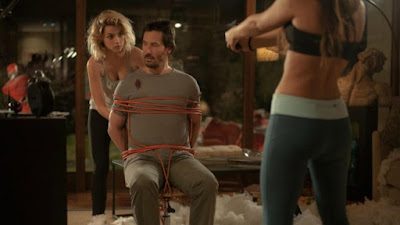 However, this movie screams “guilty pleasure.” I go into recommending it with trepidation because I think I enjoyed it for reasons that aren’t universal to everyone. You have to like sleaze to get something out of this movie. What that says about me…I don’t know and I don’t really want to explore that. Knock Knock tells the story of a devoted husband and father named Evan (Keanu Reeves) who is left home alone for the weekend. Two stranded young women (Lorenza Izzo and Ana De Armas) arrive at his doorstep looking for help. What follows is a dangerous seduction and a deadly game of cat and mouse. In short, Knock Knock is a home invasion movie but it’s much more fun than most other entries in that genre (except for maybe You’re Next) and that is my lasting impression of the movie and why I see myself probably going back to it in the future. Is it a horror movie? Yes and no. It’s more of a thriller, but if you can call something like Funny Games a horror movie than Knock Knock applies as well.

This is mainly a three character piece for the majority of the movie’s duration. The performances vary in quality (sometimes from scene to scene) but that is part of the movie’s charm for me. It’s campy. It’s ridiculous. And the performances follow suit. For example, Keanu Reeves has a monologue near the end of the movie that is absolutely over-the-top, but coming from the usually stoic actor it achieves a level of sublime. I love that he’s at the “fuck it” point of his career where he’s willing to take chances on something odd like Knock Knock. Lorenza Izzo is super cute and insidious as the more demonic of the pair of intruders, while Ana De Armas is, well, she’s not very good in a traditional sense but effective at what the role requires her to do, which is be alternately sexy and annoying as all hell. Knock Knock is complete trash but very entertaining trash and the conviction of the actors goes a long way in putting the movie over into something successful. It’s fun sleaze in the way that a direct-to-video movie from 1995 can be. Knock Knock succeeds on its intentions. 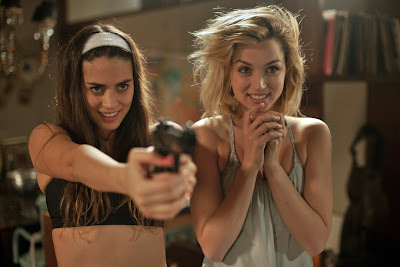 I also appreciated the movie’s playfulness and energy. For a little while during the middle section, I was worried that the movie was trying to get deep and explore themes of infidelity and the seeming freedom from responsibility of the 1 percent (which it was doing in a very arch and poor fashion). However, the movie’s final act sort of up-ends all of that ground work and tells the audience that the whole thing is possibly less serious in tone than you initially were led to believe. For that I compliment Eli Roth, because it sticks to what he’s good at which is keeping things bouncy and fun even when the material is in the gallows. It’s when he’s trying to make larger points in earnest that I feel like Roth loses his way. See Hostel: Part II for an example. 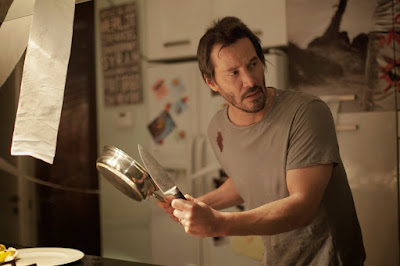 Roth has also made a beautiful looking movie. Credit goes to production designer Marichi Palacios (Aftershock, The Green Inferno) for taking a movie that is set in a single house and populating it with enough interesting artifice so that the setting never feels suffocating. Knock Knock has style and that’s one element that I think Eli Roth has been strong at his entire career. All of his movies, even the less successful ones, have an authorial stamp. They are uniquely his own and I’ll take that any day over something more generic.

So should you rush out and see this movie? Probably not, but if you’ve seen some heavy stuff this Scary Movie Month and are just looking to turn your brain off and watch something fun (this movie relies more on suspense than gore) then this is a good choice. Knock Knock is a complete lark. It’s well-paced, entertaining, coarse and somewhat edgy. But more importantly, it’s just a whole hell of a lot of fun. I actually would recommend this one more for Junesploitation than anything else.