Movies were better in the olden days… and candy was a nickel too! Now get off my lawn!

It may be over 60 years old, but there’s no denying that The Killer Is Loose, a largely forgotten noir programmer from 1956, delivers. The film is full of interesting twists and turns, especially for fans of film noir. Every professional involved with The Killer is Loose is working at the top of the game, especially director Budd Boetticher, cinematographer Lucien Ballard, and the entire cast.

The Plot in Brief: A routine investigation of an unusual bank robbery leads police detective Sam Wagner (Joseph Cotten) to the home of bank teller Leon “Foggy” Poole (Wendell Corey). Suspecting that Poole was the “inside man” on the job, Wagner storms his apartment and accidentally kills Poole’s wife. Poole swears revenge as he is sent to prison. Wagner and his beautiful wife Lila (Rhonda Fleming) certainly have nothing to worry about, do they? Have they not heard the title of this film? 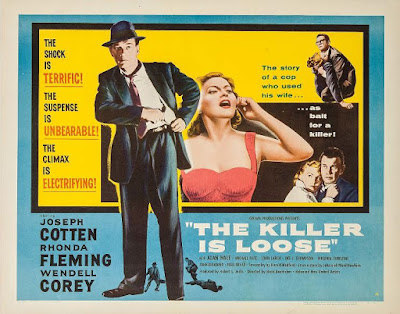 Budd Boetticher is now mostly remembered for the string of extraordinary westerns he directed between 1956 and 1960 that all starred Randolph Scott: 7 Men From Now, The Tall T, Ride Lonesome, Decision at Sundown, Buchanan Rides Alone, and Comanche Station. The Killer is Loose was filmed before all of these Westerns and finds Boetticher playing around with the tropes of a very different genre, film noir.

The first third of The Killer is Loose seems like Boetticher is inventing a new genre: sunshine noir. The film takes place in LA and features scenes in the morning and afternoon under a blazing California sun. Then a scene in a gloomy apartment plunges the film into darkness and the remainder of the film takes place at night. It’s a nice detail that adds to the tone of the film and helps ratchet up suspense. Boetticher leads viewers to believe the film is one genre (a heist picture or policier) before pulling the rug out from under us, plunging us into the shadow world of suburban LA at night. The Killer is Loose is very suspenseful and very lean, with no extraneous subplots—it’s a great genre exercise. 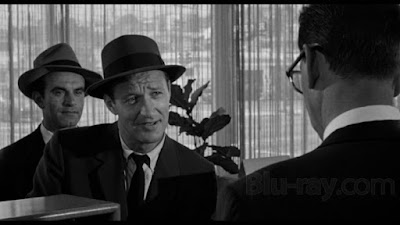 Lucien Ballard shot The Killer Is Loose the same year he lensed Kubrick’s The Killing; he also shot The Sons of Katie Elder, The Party, True Grit, The Wild Bunch, The Ballad of Cable Hogue, Elvis: That’s The Way It Is, and The Getaway. He was Sam Peckinpah’s favorite cinematographer. He brings a vivid clarity to the black-and-white cinematography and a knack for compositions in depth. This attention to detail becomes ironic at the end of the film, when a big part of the film’s climax focuses on characters not being quite sure of what they can see.

It is a joy to watch The Killer is Loose just to appreciate the deep, deep bench of character actors plying their crafts. Wendell Corey isn’t well remembered today, but he did an insane amount of television in the 1950s and ’60s, usually playing a sheriff. He was also featured in Rear Window. He adds nuance to his role; we pity and sympathize with his Leon Poole, not just fear him. Also featured are three of the busiest character actors in Hollywood: John Larch (170 lifetime credits, five in 1956 alone; he played the police chief in Dirty Harry), Alan Hale (224 lifetime credits, best known as the Skipper on television’s Gilligan’s Island), and Virginia Christie (167 lifetime credits, best known as “Mrs. Olson” in a popular series of Folger’s Coffee commercials in the 1970s). The same year Christie appeared in The Killer is Loose, she was also featured in Don Siegel’s Invasion of the Body Snatchers… and three other films! 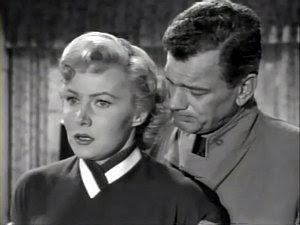 If one had sufficient free time (I do.) one could play a game with The Killer is Loose akin to “Six Degrees of Kevin Bacon.” If anything, this game proves just how busy these character actors were at the time. Here goes: Virginia Christie appears in The Killer is Loose; she also appears in Invasion of the Body Snatchers, directed by Don Siegel. Siegel directs Dirty Harry, which features John Larch, who is featured in The Killer is Loose, photographed by Lucien Ballard. Ballard is DP on the first movie starring Randolph Scott after his string of Boetticher pictures, Ride the High Country. Sam Peckinpah directed Ride the High Country; he actually has a brief cameo in Invasion of the Body Snatchers. (He’s the suspicious gas meter reader.) What do I win?

Joseph Cotten here plays the hero, a man who will not be deterred from his work. His big scene in the film involves an argument with his wife when he wonders aloud what type of man she thinks she married. It’s great, strong stuff. Cotten’s voice has always reminded me of caramel—it’s smooth, rich, and soothing. Cotten of course also starred in a little film called Citizen Kane. 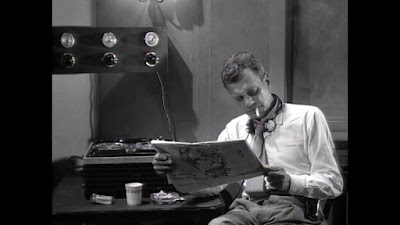 Besides enjoying the direction, cinematography, and acting on display in The Killer is Loose, I was glad to note that, about two thirds of the way in, the film slows down to actually talk about something real. Two women engage in an intense conversation about the responsibilities their police officer husbands have to their jobs and how difficult it is to be a police officer’s wife. I appreciate when even simple genre films are willing to talk about something real. (Just this past weekend, Kingsmen: The Golden Circle entertained a debate about drug policy in the midst of all of its shoot-em-ups and boom-boom-booms.)

Don’t let the low thrill-o-meter score deter you, The Killer is Loose is well worth your time. Forestall that long-held grudge you were going to act on tonight—see this movie instead. It might just save your life…

The Killer is Loose Thrill-O-Meter Reading: 68.75%

THRILLS: 75%
(Exciting robbery at the start of the film/
Unbearable suspense during film’s conclusion)

SPILLS: 50%
(Possibly dead sheriff pushed out of a moving car.)

SOCIETY’S ILLS: 100%
(Post WWII concerns, Flaws in the criminal justice system,
and a police officer’s duty to his job and community)