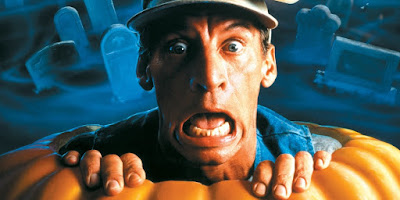 Adam: Full disclosure, I’ve always been a defender of the Ernest P. Worrell character created by the late actor-comedian Jim Varney. It started as being a genuine fan because I was the target age range for his films released by Touchstone Pictures in the late ‘80s and early ‘90s. I thought he (and the movies) were funny, so there’s a lot of nostalgia in play with this character for me nowadays. My favorite of the Ernest movies is Ernest Goes to Jail, because it is the one that takes his character out of his wheelhouse (family-themed topics like holidays or where children are predominant) and it pits him as the simpleton amongst genuinely bad people. Ernest Scared Stupid is probably the one I watch the most because of it being a Halloween movie (it’s somewhat the Wes Craven’s New Nightmare to Hocus Pocus’ Scream in terms of Disney testing out the waters of live-action Halloween fare in the 1990s) and I’ve always sort of liked it. This viewing was different. I started to have a lot of questions about, well, everything - Is Ernest appropriate in 2017? What is your history with Ernest and Ernest Scared Stupid? How did this recent viewing go? Is it Problem Child all over again?

Erich: The good news is, Ernest Scared Stupid is not Problem Child. The bad news is, it’s nowhere near as good as I remember it being. My particular Ernestory goes back at least as far as yours (I’m an old man, after all). I loved all of his movies but what I really dug was his Saturday morning TV show. Nothing gets the sugar cereal-fueled blood of a child pumping like watching a live action cartoon dude be goofy and fun in between episodes of whatever new Saturday cartoons were unveiled by the cast of Saved By The Bell on the Friday night before the start of new Saturday morning cartoon season. (There are few things I miss more, and would surely be disappointed to revisit, like those Whitman sampler network specials shilling for the Saturday morning TV lineup.) But back to Ernest… I couldn’t tell you how long his TV show lasted. In my head it ran for two decades. In reality it probably lasted six episodes. I was right there with him when he made the jump to the big screen. I wore out a taped-off-TV videotape of Ernest Goes to Camp and convinced my dad to take us to the theater to see Ernest Saves Christmas and Scared Stupid. I loved them all, and I even rewatched his Christmas movie last year and found it to be really sweet and fun. I expected Scared Stupid to be a similar trip down nostalgia boulevard. It was not. There are things in it I like a lot, in theory if not always in execution, and things that made me cringe. I don’t know how this movie, or Ernest in general, would play to modern youngsters who aren’t familiar with Sopwith Camel pilots and neck braces. I’d show it to my own children if I wasn’t certain the troll would give them nightmares. 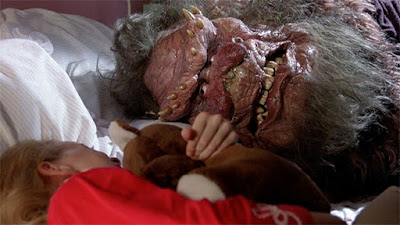 Adam: Yeah, I wonder how it would play for kids today too. It feels so much a product of its era (era). I always gravitated towards Ernest more than say Pee-Wee Herman, though I fully recognize Pee-Wee is better. I think I just always felt bad for Ernest and, by proxy, Jim Varney. The public (if I remember correctly) had it out for the Ernest character and I think it overshadowed just how multi-talented Varney was as a comedic performer. The silly side-characters he portrays are an aspect I always enjoyed. It taps into the goofy side of my sense of humor. On this viewing of Ernest Scared Stupid, I was a little thrown by how inappropriate it is to have a grown man hanging out this much with children. I know I’m not supposed to be thinking that (because Ernest is harmless and a kid at heart) but so much has changed in the past 30 years that it feels icky in a way now that it didn’t back in Ernest’s heyday.

I also noticed this weird suburban nightmare quality to Ernest Scared Stupid. It felt (at times) like Blue Velvet in the sense that there’s a veneer of normalcy but if you think about a lot of this for two seconds the situations and characters feel threatening and alien. I know for certain I’m reading too much into this because the movie doesn’t intend to be subversive, but I found that aspect interesting. The fact that the movie’s acting is at times community theater quality only adds to the "WTF" of the whole enterprise. My favorite is the moment where the mom and her daughter are arguing about her bear Halloween costume and then the scene takes a 180 degree turn that is something out of a sheet exercise you would give to beginning actors. It’s really funny.

Erich: Ernest plays an interesting part in this movie, somewhere between a clueless adult and the smart kid who is dismissed by the clueless adults even though they alone know what is going on. Ernest is, well, earnest in his mission to destroy the troll and save the town and his kid friends (you’re right that the Ernest-kid relationships are a little weird; you’re also right that you’re probably reading too much into it). But he’s also really really terrible at his job. It’s suggested that he is a savant inventor, but his inventions rarely work, unlike Pee-wee’s (can that man-child do no wrong?). He’s the leader of the troll-fighting squad but also their most incompetent member. Ernest sits in this odd middle ground between adults and children, kind of the worst of both worlds? But also the best? Now I’m the one who feels like he’s reading too much into the movie.

Adam: Why do they have multiple pizzas in their tree house ready to throw at the bullies? Nevermind.

All of the Ernest movies are like watching a children’s version of The Passion of the Christ in a way, because he’s always getting reprimanded or fired or badly injured. There are things that happen to him in Ernest Scared Stupid that would surely kill him (the troll trap closing in, him falling face first onto pavement off of a garbage truck after being compacted by the same vehicle) and it’s slapstick but also it makes me feel a little bad in the pit of my stomach to be finding entertainment out of this nice guy’s misery. A few questions for you. Do you think the costume changes are really happening and Ernest has multiple personalities like in Split? 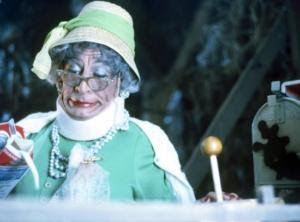 Erich: I haven’t seen Split yet! SPOILEhhhhh who am I kidding? Those multi-Varney-verse character scenes are only odd when the other characters call attention to it. I believe someone actually says Ernest has multiple personalities, which adds tension and might be the scariest thing in the movie. I don’t know that I ever feel that Ernest is in real pain or danger, though that garbage truck compactor scene comes close. (That dog is smart; are we supposed to believe he didn’t do that on purpose?) The highlight of the movie for me might be the troll design. I’m not crazy for the ever-growing waterfall of boogers cascading down its face, but I dig the two noses. Not sure I’ve seen that before. The design of the troll army works for me, too. If this had come out before the infamous Troll 2 you KNOW I’d be hashtagging the heck outta #NotMyTroll2 right now. How do you feel about the ending—not only the way Ernest defeats Trantor, but the way it takes on its Boss Battle super form that just happens to be invulnerable to milk. Speaking of which, I kind of wish this had been directed by Peter Jackson so every time a Troll got hit by milk they exploded in a geyser of blood, guts, and dairy instead of just fading away original-series Star Trek transporter style.

Adam: The ending is a real cop out in my opinion. It’s all about the love of a child? Bullshit! I want to see that damn troll get destroyed by milk! Like so much milk! Raining milk ala the raining blood in the Evil Dead remake. Am I a total idiot for thinking the Miak joke is funny? Don’t answer that. I also laugh at the quick “He never knew when to quit” visual gag and when Ernest says that the grocery store cashier really plays charades for keeps. I’ll end my comments on Ernest Scared Stupid by asking you a few more questions: Who is funnier to you (and why), Tom Tulip or Bobby Tulip? Do you think Ernest paid for all that troll fighting gear? That plot detail was left unresolved. I’m assuming he did??? In 2017 what do you think is the legacy of the Ernest P. Worrell character/universe? 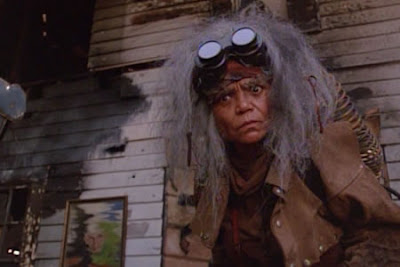 Erich: I’ve got to go Bobby, ‘cause silent is funny. Bobby. Silent. Bobby. ...Damn, I think Kevin Smith owes Jim Varney’s estate some serious back pay! I don’t see how Ernest could have paid for the troll fighting gear, unless it turned out the troll was buried with a bunch of gold. That’s possible. Sure, that’s the ticket. Magic troll gold. What’s Ernest’s legacy in 2017? Boy, that’s a tough one. I don’t see the character making a comeback among the younger set today. Maybe I’m wrong. I hope I am. At the very least, nothing that I’m aware of has tarnished Jim Varney’s legacy. I hope. ...Okay, I just Googled “Jim Varney Scandal” and didn’t come up with anything so WHEW. I still think his movies are sweet, Ernest Scared Stupid included. Revisiting it for this column didn’t make me love it more than when I saw it at what I now realize was age 14 (I was not a cool teen). It’s not as good as I remember, but if nothing else it benefits from the warm suffocating blanket of nostalgia that automatically elevates any Halloween-related movie watched in October by a star, letter grade, or thumb depending on your film critic metric of choice.

Adam: I’m of the same opinion. It remains a fun October watch. My most lasting memory of the movie remains how excited I was to see it on opening night back in 1991, but I had to go to temple that night and my parents said the movie looked dumb and I couldn’t go. Well, guess what? I haven’t been to synagogue since 1995 and I’ve seen Ernest Scared Stupid at least ten times since then. That’s Jim Varney’s legacy right there. (Points for emphasis) Right there!

P.S. How did we go this entire column without mentioning Eartha Kitt? That’s bananas.