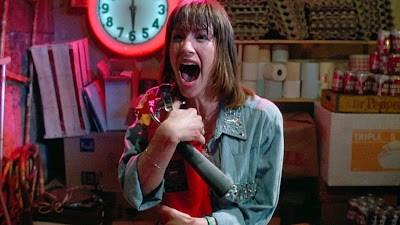 We end this year's Great Horror Performances series with one of the all-time great final girls.

I announced at the start of this year's #ScaryMovieMonth that we would be dedicating the month in part to the memory of Tobe Hooper, who passed away this past August and is my favorite director. I haven't written about him much this month, though, in part because I still find it difficult and in part because I've written so much about his work in the past. I don't want the month to go by without recognizing the greatness of his filmography, but I'm not going to do it by talking about his talents as a filmmaker. Those are self-evident. Instead, I want to shine a light on one of my favorite performances in any of this movies: Caroline Williams as Vanita "Stretch" Brock in the 1986 sequel The Texas Chainsaw Massacre Part 2.

There is an intensely heightened reality in all of Tobe Hooper's movies, one that is colorful and absurd and outrageous and, at times, downright shrill. With few exceptions (and I'm thinking here of Poltergeist, because while I will forever defend the fact that TH directed the movie, those characters live in the Steven Spielberg universe and not the Tobe Hooper one), the characters and performances contained within those films are traditionally pitched thusly; consider Neville Brand in Eaten Alive or Karen Black in Invaders from Mars or Steven Railsback in Lifeforce or Edwin Neal in the original Texas Chain Saw Massacre. All of the performances in The Texas Chainsaw Massacre Part 2 belong to this same school of performative madness, including Caroline Williams as the film's protagonist and lone survivor. While all of the performances in the movie are crazy and fun, what is so special about Williams is that she finds the humanity in her character and manages to make it shine through all of the bloody, cartoonish insanity. 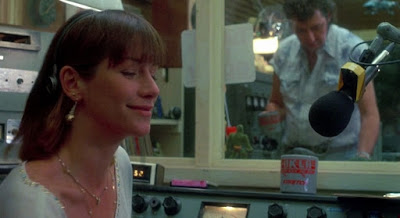 From the moment we meet Stretch working as a Texas radio DJ, she's fun and upbeat, engaged in a sweet friendship and casual flirtation with her engineer L.G. (Lou Perryman), who loves her from afar (but not that far). She's the type of woman who breaks the hearts of all men who know her but who is too nice to even know she's doing it. But Stretch is not some giggly, passive, girly girl, either. She's not taking shit from anyone -- certainly not the two yuppie douchebags tying up her phone lines with what appears to be an obnoxious prank. When they're slaughtered by Leatherface on-air and Stretch is the one with the proof, she springs into action without a second thought, putting herself at risk by replaying the tape on air and drawing the Sawyers out. She is not a character who begins as meek and must find strength as the story unfolds. She is a character who starts out strong-willed and independent but who is temporarily broken down by the madness she encounters. Her only way out is to go as mad as the monsters she's facing.

This section of the movie, which makes up the entire second half of the running time, requires Williams to sweat and scream and be terrified for a really, really long time. It's hard to sustain that level of hysteria (as Marilyn Burns had already learned on the first film), but to Williams' credit, she has the stamina and the strength to keep ramping up the terror as it goes on. It's more than just screaming she has to do, too. During the controversial scene in which Leatherface comes on to her with his chainsaw, Williams has to be horrified while still attempting to soothe the savage beast with her sexuality. When he tries to hide her from the rest of his family by putting the flayed skin of her former co-worker L.G. over her face, she has to be terrified and repulsed while still selling the black humor (or, in this case, what Mick Garris more accurately refers to as "red humor") of the moment. When Deputy "Lefty" Enright (Dennis Hopper) finally comes to the rescue as her head is being repeatedly hit with a hammer, Stretch calls out his name in a way that's pure desperation -- a moment of vulnerability that goes way beyond what we normally get from a Final Girl. In that moment, she has been broken. But she's not done yet. 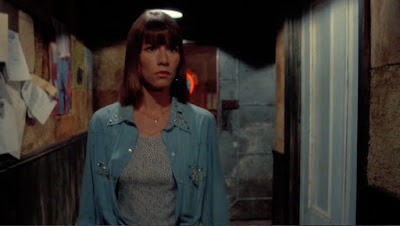 What I love about Caroline Williams' performance through all of these scenes is her total fearlessness and lack of ego. She establishes Stretch as strong, capable, and confident so well in the early scenes that she's able to strip all of that away when the shit goes down and play the character like a bunch of exposed nerve endings. Plenty of actresses have been "scared" in horror movies; they run away, they scream once or twice, they persevered. What Williams has to do is so much more than be scared. She has to play true terror -- the kind that's just this side of madness. Where she has Stretch begin versus where she ends up is one of the widest arcs in horror, and there's never a moment at which Williams has us doubting the reality of her predicament or the honesty of her response.

About that ending. After managing to survive the Sawyer family's attempts to kill her, skin her, and most likely eat her, Stretch regains her power in the movie's final moments. As the rest of the cannibal family is blown to smithereens, only Chop Top (Bill Moseley) remains, still pursuing Stretch even as she escapes the underground lair and makes it back out to the open air. She fights him off, eventually picking up her own chainsaw and running it through him before knocking him off a cliff to his death. The Texas Chainsaw Massacre Part 2 ends with Stretch lifting the saw above her head, screaming in a mixture of triumph and madness, dancing around in much the same way we saw Leatherface wiggling earlier in the film. To defeat the monster, Stretch has become the monster.* Once again, Caroline Williams commits to the moment with total abandon, never tempering what she's feeling, never giving in to the vanity of half measures. She sells the shit out of it. 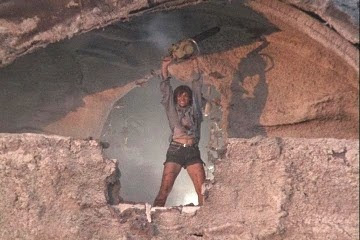 It is her total commitment to the lunatic energy of Tobe Hooper's vision that I admire most about Caroline Williams' performance in the film. The other characters and actors all get to be over the top and funny, but Stretch isn't in on the joke. She has to play real terror, and if Williams doesn't sell it in a way that's authentic, there are no real stakes in the movie. That's the real reason I love Stretch: not just because she's beautiful and not just because she's badass, but also because she's what grounds TCM2 -- at least, as much as a movie this bonkers over bananas can be. Williams makes us like and care about Stretch before things get bad for her so that when they do, we're genuinely invested in her survival. Unlike some of Hooper's other female protagonists, Stretch doesn't just survive; she fights back and she wins. It's a victory well-earned, just as Caroline Williams' long and varied career following this breakout performance is a victory well-earned.


*Yes, I know that she cameos again as Stretch in Leatherface: The Texas Chainsaw Massacre Part III, now working as a TV reporter. Obviously she didn't go completely crazy at the end of this film. But this is where Tobe Hooper chose to leave the character, so that's what counts for me.
Posted by Patrick Bromley at 12:00 PM