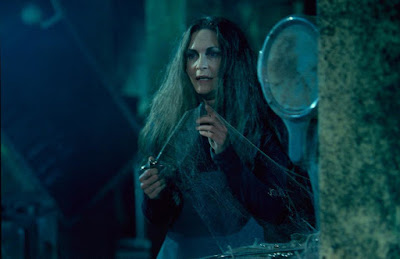 Calmly smoothing black and grey hair away from her eyes, we see the face of America's Greatest Film Mom. It is at this moment that we know she'd probably laugh while planting an ax through our forehead.

Dee Wallace, then Dee Wallace Stone, clearly needs no introduction -- especially to genre fans --although she always deserves one. From The Howling to Cujo to Critters to dozens upon dozens of film and television roles, Wallace was often a mom and always a joy. Sweet without being saccharine, beautiful while being relatable, Wallace has long excelled in roles that take a great deal of physical and emotional energy but need to look effortless. She's famous and treasured but somehow still underrated. It's easy to love her, but her acting hasn't been celebrated like many male actors who have only a fraction of the range and number of credits she's achieved.

When I saw The Frighteners in theaters when I was 12, I had no idea the blonde, angelic mom from E.T. was Patricia Ann Bradley. Patricia is a firm nod to Caril Ann Fugate, who was only 14 years old when she was the girlfriend and accomplice to serial killer Charles Starkweather. Played in flashbacks by Nicola Cliff (Quick nod: She's terrific), Wallace portrays Patricia around the age of 50. She's meek and, by all appearances, under the firm thumb of her cruel mother. Was she just a teenage girl trying to stay alive around a madman, or was she just as bloodthirsty as Johnny Bartlett, the mad killer boyfriend played a little TOO brilliantly by Jake Busey?

I'm about to spoil it, but the fact that we're left unsteady about this for most of the movie is a testament to Wallace's deft reactions, darting, emotional gazes and the fact that Peter Jackson cares at least as much about actors' faces as he does about special effects.

Wallace's easy sell from her turn from cowering victim in a grand old mansion to making out with Busey while sliding around in combat boots with a shotgun can't be overstated. She's having the time of her life with a fully fleshed-out character that a lesser actor could easily be far too hammy with. I can't claim to understand the psychology of someone who would murder people at 15 and nurse a love affair with a killer ghost decades later, but damn if Dee doesn't make it feel authentic. She's both gorgeous and mad. Her love is true, and she's about as cruel and as violent as people get in mainstream spooky movies with goofy gags involving ghosts. The Frighteners is a well-made rollercoaster whose seats are filled with talented, game actors, and Wallace is no exception. While she's technically a supporting actor here, her frantic energy, thirst for blood and weird, misguided sexuality are what truly fuels the final act and makes it so memorable. Seeing her beat and earnestly try to murder fellow '80s icon Michael J. Fox is the kind of cognitive dissonance I deeply enjoy. 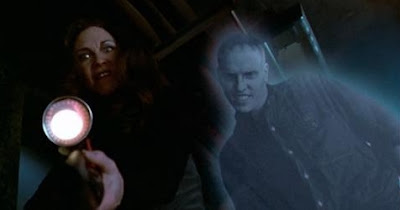 The fact that Wallace is an oasis of charm in so many scary movies is part of why she's one of my favorite actresses, but the unsettling and unlikable Patricia is my favorite role of hers. With decades of training in some of our most beloved genre pictures, this is a multi-faceted role that I truly believe only she could play this well. From puppets to CGI, Wallace has long held her own and shined against the elements of genre film that get put on the poster and on merchandise. In The Frighteners, Wallace becomes the monster that's crashed through her dining room table so many times before, and it's delicious.