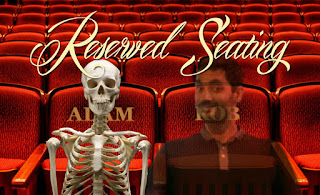 I mean we already flatlined, so what other kind of shenanigans could we get into?

Adam: This week, we’re reviewing the remake of 1990’s Flatliners also titled Flatliners. It tells the story of five “gifted” (they aren’t very good at what they do, imho) medical students (Ellen Page, Diego Luna, Nina Dobrev, James Norton and Kiersey Clemons) who up and decide that flatlining is a good after-school activity. Page is the ringleader who takes the first trip, bringing back a specific set of skills (masterful “Clair de Lune” piano playing, the urge to bake bread, all the answers in class...she basically acts like she got high and took Adderall) that the rest of the team think are totally boss, so why not also force die? They’re all “SCREW YOLO! YOU ONLY LIVE TWICE! YOLT! WE’RE JAMES BOND! WHOOOOOOO! OUTDOOR POST-FLATLINING FIRE PIT DANCE PARTY FOR MDs! DO ME WHEN MY MOM’S HOME!”

But guess what? There’s a dark side to flatlining (duh) that could potentially tear this team apart! I sure hope they learn something about themselves and right past wrongs along the way (they totally do, everyone). Flatliners (2017) spent most of the weekend at 0% approval on Rotten Tomatoes. I will say that it is the best 0% Tomatometer movie I’ve ever seen. It is not good, but I don’t think it’s the trainwreck most people desperately need it to be. After rewatching some of the original Flatliners this weekend, I don’t see a huge gap in quality between the two movies except the earlier film had the benefit of a more charismatic cast and striking cinematography/set design. What did you think of Flatliners (2017), Rob? Also, have you seen the original 1990 film starring Kiefer Sutherland (who has a role in the remake), Julia Roberts, Kevin Bacon, Oliver Platt and William Baldwin? Do you remember the scene where Kevin Bacon repels off the side of his dorm with carabiners and rope instead of simply walking down stairs? 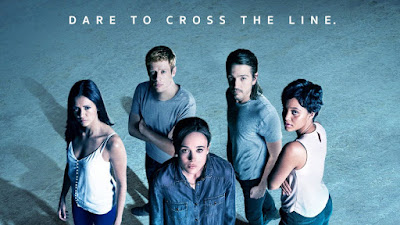 Rob: I meant to revisit the original film over the weekend, but I ended up watching Critters instead. Long story. To be honest, though, I’m not even sure I have all that much to say about this version of Flatliners. It’s a dull movie that no one seems to really want to be in. Everyone looks like they’re being held at gunpoint, playing irritating characters in whom we have no real reason to invest any emotion or sympathy. Ellen Page is definitely in this movie, which is something. Also, does the hospital assign the girls the same sports bras? They seemed to match. I don’t know. What else? The production design and special effects were so generic that they made the afterlife seem boring. It’s funny because I used the trailers for both versions of the film as a compare/contrast exercise in class the other day, and a few of my students said they were planning on seeing it this weekend. I went into work today all primed to talk about it, and they were like, “Oh, yeah. I forgot about that.” I started laughing because I realized it was a perfect encapsulation of the experience: Flatliners sort of plods along aimlessly for 100 minutes, occasionally having to be woken up and reminded that people are watching it. All I can think about is how bad Sony is at making movies. Why even make this? Was it just the next IP on the list? Were the rights coming due? Why did this happen to me?

Adam: It was definitely the next IP. Sony seems to be more risk averse than just about every other studio, so I’m sure they thought that remaking Flatliners was a better bet than rolling the dice on something original. I agree with you that the movie feels and looks very generic. When Ellen Page flatlines and goes to the afterlife, it looks like a show you’d see at a planetarium. For the first hour or so, I thought the movie was bad but in a way that was so-bad-it’s-good, but then there’s a twist in the middle of the film and I perked up because it indicated the movie would go in a darker direction (albeit, a slasher direction) than the 1990 film until that’s jettisoned. I couldn’t believe how tidy this movie wrapped up. It’s 108 minutes long and I remember looking at my watch around the 90-minute mark and being surprised how little was resolved with 80 percent of the principal cast and wondering where the film would go. It just sort of stops. The arcs are dealt with in a very perfunctory way and then the movie throws in the towel. It’s weird. 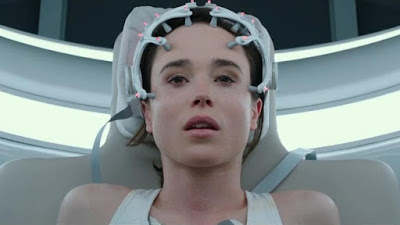 The performances were a bit lopsided. Dobrev, Norton and Clemons were pretty flat. I thought that Page and Luna pushed the limits of their thinly written characters and gave engaging enough performances. But like you said, it’s such a nothing movie that I forgot about it pretty fast after it was over. I’m surprised it’s so nondescript since it came from the director of the Swedish The Girl with the Dragon Tattoo and the writer of Source Code. It feels like inventory and not art. So, yeah, I have nothing more to say about Flatliners (2017). Mark Off and Happy Scary Movie Month!

Rob: I swear we’re not being lazy, everyone! There’s just literally so very little to say about this movie. As Adam said, it’s rolling in one direction, turns on a dime, and wraps up everyone’s storylines (in some cases actually introducing complications minutes before resolving them) in a cool twenty minutes. No one’s given a chance to be all that good or bad performance-wise, though I agree with you that Luna and Page do what they can. Nothing is scary or exciting. I’m actually not even sure there’s a single plot thread (aside from the basic concept of Flatlining — a term they awkwardly try to make a “thing” by saying it seventeen times in two minutes) that carries over into multiple scenes. Remember how Sophia (Clemons) tries to break free of her overbearing mother by loudly banging the doofy guy who lives on a boat while she’s home? Remember how that went nowhere? The movie’s like, “No wait, her arc is going to be about how she slut-shamed a girl in high school. Also, we’re going to wrap it up in two minutes. That cool?” Like, what even is this movie? Mark Off. 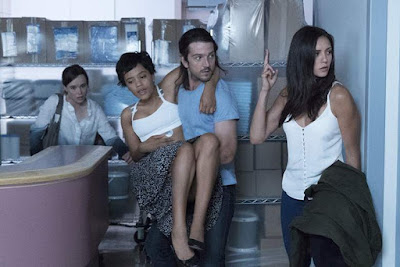 Adam: Yeah, she slut shames and then goes to find the woman to apologize and the woman basically accepts her apology immediately and we’re good. I mean, sure? Anyways, how’s your Scary Movie Month going? Who are you rooting for in the MLB Playoffs? I watched four movies so far: Species (the best), Jacob’s Ladder (save it for the column next week), Graveyard Shift (meh) and Dead Ringers (scarring).

Rob: I’m knee-deep in the Nightmare on Elm Street series. I’m up to The Dream Master, and I’m told the remaining films vary wildly in quality. We’ll see. I’m hoping to finish up NOES and the four Halloween films I still need to see before the end of the week so that I can move out of the homework phase and into some weird shit. As for the MLB, I’m going Astros or Tribe. It’ll be a while before my Phillies have any skin in the Postseason, so it’s all gravy to me.

Adam: I have a soft spot for NOES 5 and I genuinely like New Nightmare, so there’s still light at the end of the tunnel. I’m rooting for the Dodgers or the Astros I guess. I have no dog in this race but I’m looking forward to some playoff baseball. Anyhow, we’ll be reviewing the Al Pacino horror-ish classic The Devil’s Advocate next week to celebrate its 20-year anniversary. Until next time…

Rob: I just want to note that Flatliners is so boring that we started talking about baseball. Anyway, these scary seats are reserved.

Adam: (Al Pacino voice) Which ones of these teams’ playoff hopes...will flatline?
Posted by Patrick Bromley at 12:00 PM