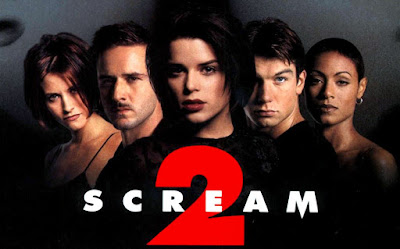 To say I was eagerly anticipating Scream 2 in 1997 would be an understatement.

Note: This column has spoilers for the first two Scream movies. You’ve seen them, right?

I’m happy that my high school years coincided with a resurgence in teen horror films (and teen films in general). I have many nostalgic memories of seeing and discussing I Know What You Did Last Summer (more on that later this month), Urban Legend, Disturbing Behavior, The Faculty, Halloween H20, etc., but no teen horror film was as big a deal to me as when I saw Scream during winter break 1996. It was, and still is, one of my favorite horror movies; equal parts tense, funny and always massively entertaining. I hadn’t even seen most of the movies Scream was referencing at that point and I still thought the movie completely worked. It was a cool movie. I was a bit of a wise-ass in high school, so I identified with Stu (Matthew Lillard) the most (he was a lot more popular than I was but I don’t kill people, so even-steven) and remember when he was revealed as one of the two killers in Scream, I was floored. I thought it was so brilliant and unexpected to make the class clown into the killer clown. Between December 1996 and Scream 2’s release in December 1997, I saw Scream probably five or more times. I couldn’t wait for Scream 2. 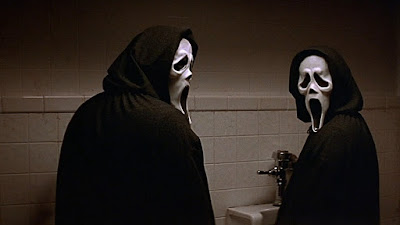 I went to see the movie on opening night after a bit of drama with my high school friends. I remember some of them were free to see the movie the Friday it opened and others were not available until Saturday. I wasn’t going to wait. That was the first (and not last) time I put a movie over a friendship hangout. It’s one of my character flaws. I don’t wait for movies I want to see. Specifically, I remember a friend named Jeff who couldn’t go until the second day. This is how that conversation went:

Me: “Hey guys, what time on Friday do you want to go see Scream 2?”

Jeff: “I can’t do Friday. Could you all go on Saturday?”

Me (answering for everyone): “That’s ok. We can see it separately.”

Me: “We’re going Friday. I don’t want to wait. We can do something else on Saturday.”

Me: “So, because you have plans on Friday already we have to be held hostage from doing what we want to do?”

Me: “This conversation’s over. You’re out.”

Scream 2 was an event film, which is rare for the horror genre. It may have been more commonplace in the ‘80s with a Freddy, Jason or Michael Meyers movie, but I wouldn’t know because I was a ‘90s kid. I’m a champion of ‘90s horror, but I’ll admit that it was lacking in a lot of event horror for most of the decade. Scream 2 felt big and it had so much swag at the time. It was exciting to be there opening night to see it. The Saturday, second-day crowd wouldn’t be the same.

I remember liking Scream 2 on my first viewing but having some complaints about it at the time, most specifically the reveal of the killers. I wanted to be floored by the reveal like I was with Billy Loomis (Skeet Ulrich,#SkeetandGreet ) and Stu in Scream; by comparison, Mickey (Timothy Olyphant, who was kind of a nobody at the time) and Mrs. Loomis/Debbie Salt (Laurie Metcalf) felt like underwhelming choices. Mickey was forgettable and absent for practically the middle third of the movie. so the choice of him felt random and by convenience (his alibi could fit onto almost any character and it wouldn’t change the movie that much) and Mrs. Loomis sucked (for me, in 1997) because she was “old.” That sounds dumb to say nowadays, but part of what was great about the Scream franchise was how young and hip it was and choosing Mrs. Loomis seemed lame. I’ve since appreciated these choices more, but they’re nowhere near as impactful as Billy and Stu in Scream. The Mrs. Loomis arc makes sense, especially if the series ended after Scream 2, which unfortunately it didn’t because I don’t like Scream 3 at all and Scream 4 is not that good either. 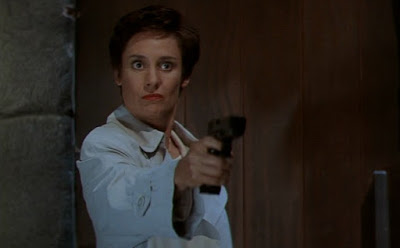 I also am not the biggest fan of the opening sequence, and not just because it pales in comparison to the all-timer opening of the original Scream. In Scream 2’s opener, why is everyone acting like they’ve never been to a movie before? The crowd is amped pre-screening (fine), but then they don’t stop when the movie starts playing??? It’s not Rocky Horror Picture Show, it’s the premiere of Stab. If it’s a premiere, then presumably none of these people have seen the movie so (at minimum) why are they getting up out of their seats and leaving the theater every two minutes??? They must be Cubs fans (who, let me tell you, cannot sit still or sit in the seat they are assigned…it’s unreal). Also, how worthless is the Windsor College Film Studies curriculum? It’s just people giving opinions on movies (I know…it’s one scene, but you get my point). That professor has lost control of his class! (Do.Your.Job.) If I were in that class and it devolved into just Randy doing impressions and people saying Alien is better than Aliens, I would shut that shit down and scream “Can we learn how to make movies, please? What the fuck is this???!!! I could work at Blockbuster for this nonsense! DOES ANYONE WANT TO SEE TITANIC WITH ME??? I WILL NOT WAIT UNTIL SATURDAY!” I will say, though, these gripes come out of a place of love for Scream 2. They aren’t deal breakers.

As years have gone by, I feel like Scream 2 has become underrated. It gets lumped in with the third and fourth movies as a lesser entry, which I don’t agree with. While not the watershed 4/4 star movie that Scream was, I would say Scream 2 is a solid 3.5/4, which is especially impressive considering the movie was released less than a full year after the original. That’s a fast turnaround time for the cast, director Wes Craven and screenwriter Kevin Williamson. The production history of Scream 2 is fascinating unto itself, as the quick pre-to-post production schedule resulted in internet script leaks (revealing identities for killers who would later not be the killers) and the need for scenes to be shot the day their screamplay (I had to) pages were finished, often fleshed out on the fly by Wes Craven. It’s sort of a miracle that the film came together as well as it did. Credit for that should also go to editor Patrick Lussier (who would later become a director himself), as Scream 2 feels a bit flabbier than the first Scream but also maintains a high energy throughout that tips the scale back in its favor. 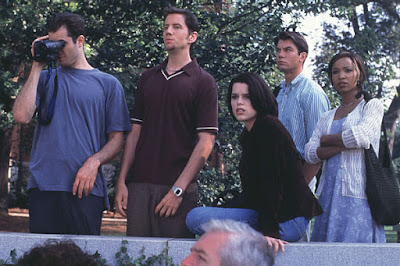 Is the movie dated? Of course, but so are you, and since it was released in my formative years it’s more of a fun time capsule than something I roll my eyes at. I love the movie’s personality with it being set at Sidney’s (Neve Campbell) college (I’m a sucker for campus movies no matter what the genre), I love the interplay between characters we’ve grown to love (Sidney, Gale [Courtney Cox], Dewey [David Arquette], Randy [Jamie Kennedy]), I love the cannon fodder new class cast including Sarah Michelle Gellar, Jerry O’Connell (so earnest) and Omar Epps. I do have mixed emotions about Cici’s (Gellar) death, though, because it goes immediately into an Everclear song and I like Everclear so each time I watch Scream 2, I’m kinda “Get her, Ghostface!” just so I can hear “The Swing.” I especially appreciate the weight given to the deaths of characters (except Cici, apparently), specifically Randy, which is gruesome and shocking and makes the movie feel more foreboding. I’m ok with survivors of a first movie being killed off in a second movie if it’s not for cheap effect or manipulated character motivation, and the death of Randy, I think, is one of the most tragic and well-managed deaths of a beloved character I can recall in a horror movie. Plus, how great is that scene where Sidney and Hallie (Elise Neal) have to escape the crashed police car and sneak past an unconscious Ghostface? And lastly, this movie has an amazeballs soundtrack. My favorite song is “She Says” by Collective Soul, which plays right before and during the end credits as the camera cranes up from Sidney to an overhead shot of the campus now safe from Ghostface(s). It’s the best. This movie’s like AMPM, baby – too much good stuff.

Scream 2 is also very much a meta commentary about sequels while also being a sequel itself. I don’t give a shit about any of that stuff. For me it’s the characters, the direction, the style, the nostalgia and the entertainment. That’s what makes Scream 2 special to me. Cleverness has a short shelf-life. Fun Fact: Did you know that some other titles considered for Scream 2 were Scream Again, Scream Louder and Scream: The Sequel? I am not kidding. In that spirit, I’m offering a suggestion of my own: Sidney Prescott and the University of Doom.