The Hidden Trauma of DARLING 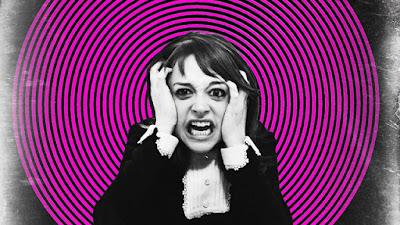 Horror movies make the most out of the questions of life.

They live within the questions and are breathed to life within the indecisiveness there. These questions are ones we tend to shove to the back of our thoughts due to living life; we have to put food on the table, keep the lights on and make sure the cat are fed. Thoughts of trauma, broken hearts or the “why are we here” are saved for deep at night and these questions can seep in through the corners of our brains. Horror feeds on these deep night thoughts when it’s dark and calm and the world seems bigger with fear. The answers that horror creates are just as nebulous as the questions it poses.

I mean, this is all speculation on my part. I haven’t watched nearly enough horror to even be an apprentice. But I am dipping my toes in and not allowing for potential lack of sleep to sway me. When I saw Darling, it stayed with me. It had such beautiful and intriguing cover art that I had to be brave and watch it. I was so happy I did. 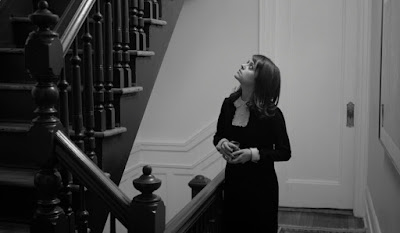 Don’t get me wrong, I didn’t sleep well that night, partially because I was spooked and partially because I thinking about what the movie did. Darling starts as a haunted house film and becomes a film about obsession and trauma. Darling (Lauren Ashley Carter) is a caretaker for the oldest house in the city, owned by Madame (Sean Young) as she goes away for the winter. As she leaves Darling, Madame drops the information that the last caretaker killed her herself and that there is gossip of the house being haunted. Carter plays off this information through her facial expressions. A majority of the film is her alone in the house and she works all the curves and angles of her face to create the most of them. The black and white cinematography uses her distinct look as she explores the house until she reaches a room that she cannot open. Carter will come back to this door often throughout the story as she slowly loses control.

The mood that director Mickey Keating creates is very specific. He is playing off the haunted house stories of our youth, presenting us a big house with lots of space for scary things to be hiding. Keating holds on all these corners of the house deliberately, waiting for the jump. Combined with the visuals is the score, which starts mellow and then sharply raises at deliberate times. The film jumps from location to location in the house and cuts the music in and out to create a feeling of unease in the viewer. There could be something visually arresting going on with the humming sound or Carter could be looking directly into the camera while the score clangs loudly. This chiaroscuro effect of visuals and audio keep you on edge throughout the slow burn of the story, punctuated by chapters contextualizing the events of the film, with each chapter given a title. The titles get more ominous as the film continues with close ups of Darling’s face and her eyes connecting with the viewer. 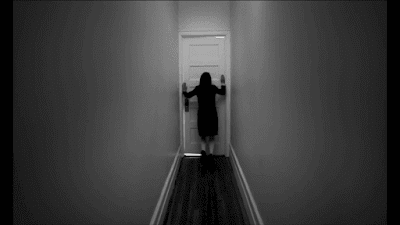 I am about to go into some spoilers moving forward, as I have to to dive deeper. Darling seems to get slowly more troubled as she stays in the house longer. Carter plays off the empty house with her whole body and doesn’t speak much but to gasp and breathe heavily as she explores. There are no physical demons or ghosts, just an eerie feeling that something is going to happen. One night, Darling gets dressed up and leaves the house to go to a bar. There, she meets a young man who she bumped into on the street earlier in the film. He chats her up, says she looks familiar and buys her a drink. She acts flirty and forward, stating she came there looking for him. She goes into the bathroom to scream and cry. When she comes back, she invites him to her place for a drink. They get to the house and he is in disbelief as he knows the stories about this house and can’t believe she lives there. Once in the house, she becomes aggressive in her tone as he tries to convince here “he’s one of the good guys” and “never goes home with strangers.” He is talking and explaining himself more as she leaves the room. When she returns, she comes back with a knife and stabs him multiple times. At this point, we learn that she believes he assaulted her at some point and she says his name, Henry Sullivan. Darling asks why he picked her and how could he do such a thing as she continues to stab him intensely. She continues to wrap a bag around his head, as he is not dead yet, and disassembles his corpse. When she undresses him she looks at his ID, and it says Henry Sullivan but after she is done cleaning up and looks at his wallet again, the ID reads James Abbott.

All the signs are pointing to something big happening as the tension builds, but Darling’s complete turn into a murderer is a shock -- at least, it was to me. Up until the point where she hurries into the room with the knife, the movie is leading you to believe that there are supernatural causes for the haunting. When she attacks Henry/James, we realize that she might be mentally disturbed and this could all be in her mind. Keating creates these questions with this one turn and turns the entire film on its head. When we see the name change on the ID, it becomes a revenge story of a mentally disturbed individual. Darling’s trauma led her to believe that this stranger, James Abbott, was her assailant, Henry Sullivan, and she hunts him down and murders an innocent man. It is no longer a haunted house film and becomes about trauma-induced obsession. Looking back after the murder, the pieces of the story that seemed to pointedly show supernatural elements crack into ambiguity. It is just a large, empty house with a door that would be locked by the owner for one reason or another. Darling fractures after her interaction with meeting Henry/James on the street. Seeing the man she believes to be her assailant is what made her truly start to devolve. The house becomes a scapegoat for her demented actions and she is the real evil. 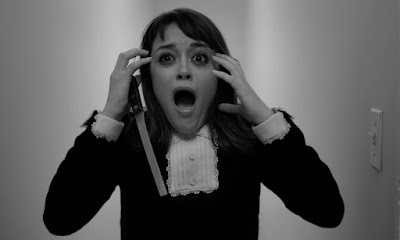 There are details that I love about this film, including the look and the way the tension is built. My main concern is that this character has to be assaulted, sexually or otherwise, to be triggered into psychosis. This is a plot line that is often used to create a background for women to do evil things. If a woman is not sexually assaulted, then she she is incapable of doing bad deeds. Rape and molestation are horrible things to survive, but they are not the only reason women “turn bad.” It is an easy reach and it works for this story, but there are other reasons this character could have broken down. I would have liked to see a bit more thought into this aspect of the character’s background, as there is so much thought put into the rest of the film.

The last section of the film is Darling’s complete breakdown and eventual suicide by jumping off the house. In this section, we see Carter eventually pound down the door that was locked, and from where she believed the ghost stories originated. We get a wonderful shot of her face distorted in panic and terror as she sees what is in the room. The audience is not shown the contents of the room. I believe there is nothing in the room and she is coming to realization of her actions. With this awareness of her situation, she then jumps off the roof and we get a last shot of Carter’s face looking into the camera. The last shot is Madam giving the same caretaking instructions to a new girl.

Darling is a creative take on ‘the twist’ on which horror movies have built their reputation. Keating effectively uses the audience's’ expectations against them as he creates a world as seen by a deranged young woman. There are more questions raised here than answered, but that is what we want. Easy answers aren’t what draw me to these kinds of films. I like when questions lead to more questions and my brain can sit coiled in the plot. The beauty of this film offsets its disturbing material to create an intriguing film that will continue to haunt me.