A Movie I'm Thankful For: THE ROYAL TENENBAUMS 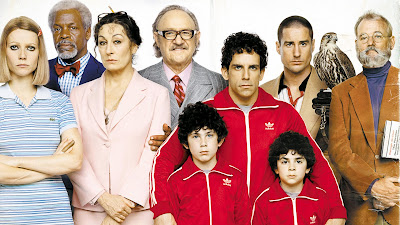 How appropriate this Thanksgiving week to look at a film that is primarily interested in family.

Wes Anderson’s The Royal Tenenbaums now joins a list—alongside 12 Angry Men, Shattered Glass, and Major League—of movies that, should I come across them while channel surfing, I must drop everything else to watch. Just ask my lovely wife. Why, just last week she sat down beside me and gently inquired, “this must be the third time this week—do you really need to watch the last twenty minutes of The Royal Tenenbaums again?” 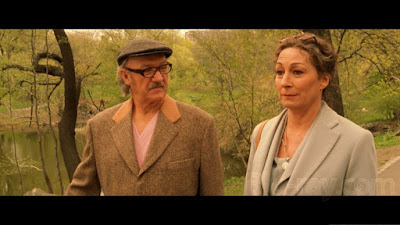 The Plot In Brief: Past-his-prime, disbarred lawyer Royal Tenenbaum (Gene Hackman) wants to reconnect with the family he abandoned decades before. His archeologist wife Etheline (Angelica Huston) has never given him a proper divorce. His son Chaz (Ben Stiller) once sued him over money Royal stole while Chaz was still a minor, and is currently suffering a nervous breakdown following the death of his wife. Son Richie (Luke Wilson) is a tennis pro who saw his professional career implode following an incident at Wimbledon. Daughter Margot (Gwyneth Paltrow)—or “adopted daughter,” as Royal frequently reminds everyone—was a child prodigy playwright, but hasn’t written in years and is now unhappily married to neurologist Raleigh St. Clair (Bill Murray). Etheline is planning to marry a straight-laced tax attorney, Henry Sherman (Danny Glover). Ritchie and Margot are secretly in love. Royal pretends to be dying to gain the others’ sympathy. Can this ragtag group of very different people ever be brought back together as a family?

I have been a fan of Wes Anderson’s work since Bottle Rocket. I know that some film fans have far less patience than I do with his unique shot compositions; persnickety, overstuffed production design; and obsession with the problems of well-to-do white folks. Anderson tends to favor medium shots with busy, multi-layered backgrounds—like a child’s pop-up book. The medium shot is handy in that it allows actors to show a range of emotion. I’m still parsing out Anderson’s obsession with backgrounds that stress the finite and occluding; does it speak to his need for control? Is it to showcase the theatricality of his characters by resembling the backdrop a stage play, or to draw attention to their specialness by evoking a museum shadowbox display? Maybe, like Tenenbaums itself, which takes the form of a book being read aloud, the classic “Anderson shot” is meant to represent the limited, myopic point of view of a single author.

The cast is composed of many actors who I don’t particularly like in any movie other than this one. I have always found Gwyneth Paltrow to be a most mannered performer, but here those affectations serve her well. She is helped immeasurably by Margot’s make-up and costume design. I find Owen Wilson impossibly precocious and self-possessed onscreen; here, playing family friend Eli Cash, his oddness is explained away by his character’s drug addiction. I have never been a huge fan of Ben Stiller, but he is perfect here as the tightly wound Chaz. His last line in the film, “I’ve had a rough year, Dad” never fails to make me cry. It may be that I love The Royal Tenenbaums so much, I want these actors to continue to play these roles… AND NOTHING ELSE!

Director/co-writer Wes Anderson is a master of soundtrack music. Like Martin Scorsese before him, Anderson’s use of popular music makes his films so much fun. Even when he strays from the Billboard charts, the results are interesting. I’m thinking here specifically of the David Bowie hits sung in Portuguese that make up a majority of The Life Aquatic with Steve Zissou’s soundtrack and the whimsical-yet-somehow-terrifying use of Benjamin Britten’s “The Young Person’s Guide to the Orchestra” in Moonrise Kingdom.

Particular favorites in Tenenbaums include: Paul Simon’s “Me and Julio Down By The Schoolyard” underscoring Royal and his grandsons mixing it up; Nico’s “These Days,” which virtually defines the word “ennui” accompanying Margot’s reunion with Ritchie at the bus station; and Van’s Morrison’s effervescent “Everyone” playing as the cast file past a beloved family member’s grave.

“Redemption” and “forgiveness” are the two themes that inform The Royal Tenenbaums. Royal himself is seeking both from all of his family members. The children are seeking a way to reconcile themselves to not living up to the promise of their youth, perhaps seeking a way to forgive themselves for abandoning the “genius” moniker each was stuck with at a young age.

When Royal reasserts himself as father and leader of the clan, it awakens the anger his children feel because he abandoned them; it takes them awhile to realize that what they’re really angry about is not the fact that he left—it’s that they missed his presence in their lives. This reminds me of calling my mother on the phone once I had become an adult and moved out of her house.

“Well, you are still a disappointment,” was always her response.

Just kidding! She never said that… to my face.

Through most of its running time, The Royal Tenenbaums reminds us that we cannot let grudges, self-pity, spite, or a misplaced need to punish others block us from recognizing how great it can be to finally get what we were so angry about not getting earlier.

The Royal Tenenbaums mines a deep well of emotion involving family. When I hear of friends that are estranged from their families, I can’t help but think of how short life really is. Though I don’t think my father and I ever saw eye-to-eye on a single issue, not a week goes by that I don’t wish I could share just one more Thanksgiving with him. This past April marked the 28th anniversary of his death—meaning that I have now celebrated more Thanksgivings without him than I got to share with him. This is a sad, sobering milestone.

In the spirit of the amazing, funny, sad, and trenchant The Royal Tenenbaums, why not forgive a family member this Thanksgiving? Let an old grudge go. Give a close relative a second chance. Call a distant relative you haven’t talked to in years. Much like a gravestone spotted near the end of the film (the epitaph of which is an egregious lie that comes close to the truth), movies are a construct, a lie meant to reveal a greater truth. In this, The Royal Tenenbaums whispers to us all a fanciful story about redemption and forgiveness in its effort to make those concepts real and true in the lives of those who are watching and listening.