A Movie I'm Thankful For: BUNNY LAKE IS MISSING 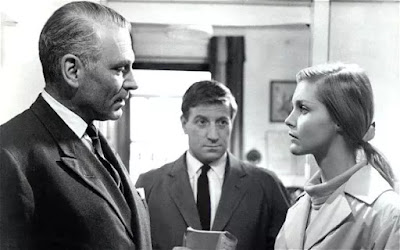 Beyond hearing the crackerjack title in passing, my first exposure to Bunny Lake is Missing was on The Zombies' "Zombie Heaven" 4-CD set.

One of my favorite bands, this is a treasure trove: beyond having every song, there were soundbites and vintage radio ads included. My favorite was for Bunny Lake. They have a performance playing on a television set in the bar and a song later in the film, so they were incorporated in the advertising -- including Otto Preminger himself singing their praises in a William Castle/Alfred Hitchcock-esque trailer. The ad itself is so off-the-wall and charming ("If the film has started, can you get in? NO!" Bless Twilight Time for including the actual filmed advertisement for it, which I didn't even know existed.) that I've included it on countless mixes for friends over the years. So after playing the "Come On Time!!" song countless times over the years, I've only seen the actual film proper earlier this year.

The film itself is a corker. Preminger leaves no meat on the bone in terms of the action or the pay-off once he's through: be it police procedural family unease or thriller. Released in 1965, Bunny Lake follows the Preminger mandate that every black and white film he's involved in must be absolutely stunning. Here he used Denys N. Coop as his cinematographer, and if you've seen Billy Liar, you have an idea of how strangely vibrant he can make a greyscale England look. 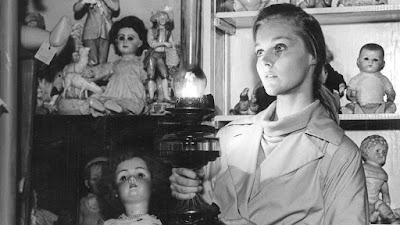 Preminger excels at escalation -- those grief-bitten moments when characters wait breathlessly for news until the scenes skillfully work their mouths open into screams. While Hitchcock is unquestioningly the master of suspense, I've yet to see anyone top Preminger when it comes to orchestrating the death-still quiet that happens moments before all hell breaks loose as flawlessly as he does. Like Hitchcock, he plays with dark humor, and I'll go on record and say that Bunny Lake should be held in the same high regard as Psycho. These films balance being sophisticated and dirty; teasing and knife-blunt while taking the viewer on an emotional rollercoaster ride without any sloppy manipulations. It's a thriller at its most addictive, and the subsequent viewings offer an entirely different experience from the first. Spoiler alert: Knowing the ending to either film doesn't spoil them at all (although I still won't. I promise.)

Also like Hitchcock, Preminger's smart enough to work off a script based on a tight thriller novel written by a woman. Here it's Merriam Modell's novel (writing under the pen name Evelyn Piper) with a script by John and Penelope Mortimer. We open with what is an almost everyday occurrence for many: picking a child up from the first day of school. The half-hour or so take place in a school, looking for a little girl we've never seen, and the pacing and acting are so natural that it feels more like 10 minutes. 10 lean, GREAT minutes.

The cast could not be more perfect or clued-in to the tone and pacing. Here, Laurence Olivier is just where I like him best: playing a calm, droll man who's still fully engaged while he's smirking and quirking an eyebrow. Carol Lynley ("is keen as a knife!" - The Zombies) runs the gamut between lost young mother to gaslit victim to the fast-thinking yet panicked Final Girl archetype by the end. This performance deserved a hell of a lot more attention than it got. She's a stranger in a strange land as an American who's freshly moved to England, and it's so incredibly England that playwright Noël Coward himself is her creepy landlord. He apparently owns the Marquis de Sade's skull, which sums up the droll but uneasy wit the film has coursing through every scene. Keir Dullea is Bunny's uncle, and he feels almost before his time in his performance here, much like the young George Stevens often did. He juggles a lot in this film, as most of the characters do in this emotionally intelligent script, but we never see the heavy lifting. 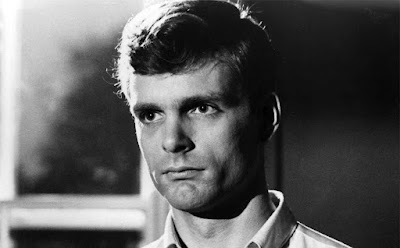 Like Laura, Advise & Consent and Anatomy of a Murder, Bunny Lake is a film that was supposed to exist. It's so precisely filmed that it can seem cold at first glance. It's not. Instead, it's truly a gorgeous, unsettling experience with a heart big enough to encompass madness, loss, love, humor and mystery. It's full of knick-knacks both literal and of the human psyche. It reminded me of why I love unusual films that forge their own path in genre and tone so much. There's no high or low brow here -- this is art that gives a shit. It's well done, it's touching, it's scary, it's demented and it's fun.

It's been a turbulent year to say the least, and being able to connect a brilliant movie I deeply admire to a small, happy memory and piece of music I've enjoyed for years was the kind of present I really needed. I'm incredibly grateful to finally have Bunny Lake in my life, and I'm thankful I finally made it on time for this show.