by Patrick Bromley and Stephanie Crawford 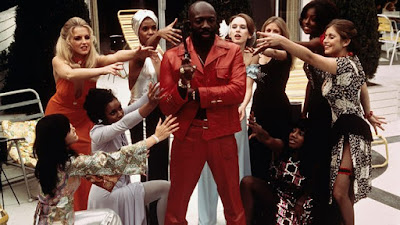 The world's greatest video store is hundreds of miles wide.

Patrick: Stephanie! You and I are both avid movie collectors. In fact, one of the things that first bonded us online was the cool collection you are curating, which you would post pictures of or talk about and caught my attention.

I was saying a few weeks back (during a massive Kino Lorber sale) that there were a bunch of movies I wanted to see but didn't want to blind buy, and you came up with the great idea to share movies by sending them to each other. You are smart! You also had the idea to create content for the site based on this exchange. You are smarter than me! You are running the site now. Take good care of it.

I'll start with one of the titles I borrowed from you, because it was my favorite of the three that I saw: 1985's Certain Fury, starring Tatum O'Neal and Irene Cara as would-be convicts who escape sentencing and go on the run, like a mid-'80s Black Mama, White Mama. What a feeling! 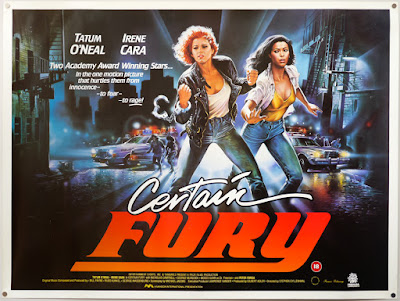 I loved this movie. I loved how silly and sleazy it was. I loved the synthesizer score, even though it was often too upbeat given what was happening on screen. The movie was put out by New World Pictures, which makes sense even though it really, really feels like it should have been a Cannon Film, down to the casting of Irene Cara as one of the leads. Cannon loved to cast non-actors and make movie stars out of them.

Do we need to talk about the shower scene?

Stephanie: We may need to talk about the shower scene eventually, Patrick, but until then, we have to mention how intimidating your film collection is. People have written articles about their experiences with your collection. I suggested putting your movies in a database online, and once I saw the size of it, I felt really bad and guilty about that. Still, the idea of the movie exchange was too exciting to me to let pesky human empathy get in the way.

I live in a city with one small rental store, and I love it, but sometimes I still crave the laziness of movies coming straight to me. Bromley Video is a great idea, and I wish you’d at least look at my PowerPoint presentations. Pushing that aside, the first movie I watched from Bromley Video (Eh? Hear that ring?) was Knightriders, George Romero’s 1981 renaissance faire motorcycle opus. I saw it before years ago, and I’d been meaning to revisit it. Romero’s death made that need a moral imperative, and I’m so glad you had it. From Stephen King’s cameo to the genuine dramatic moments between Ed Harris and Tom Savini, Knightriders will always be able to stand tall as a true original. 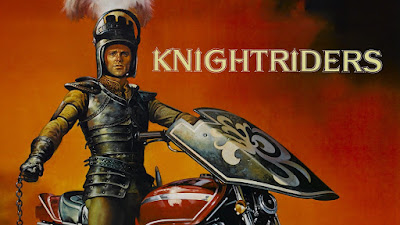 While the poster art, at least for me, conjured up images of a time traveling biker gang, the reality hit a comfort spot I didn’t know I had. I love character stories, and the small world Romero created, populated with familiar faces from his other films, reminded me of why I miss him so much. I’ve always gotten a strange solace from his movies, despite how often he was labeled as misanthropic or nihilistic. I always felt like Romero saw us for who we are, and still wanted to hang out with us anyway.

Patrick: Nowhere is that more true than in Knightriders, which is one of my favorite of his movies and the one I still think is his most underrated. It’s his warmest movie, too: one that’s about love and friendship and doing what’s right for you even as that means not judging what’s right for someone else. As someone who loves George Romero very much the same way you do, the way Knightriders celebrates the idea of building your own family -- something Romero did throughout his career, whether that meant the cast he often re-used, the crew who worked on so many of his films or even us as fans -- makes it beautiful and special in a way that even his other masterpieces aren’t. And that last thing you said about Romero seeing us for who we are? That’s maybe my favorite thing I’ve ever read about him. You win.

On the subject of my “intimidating” collection, it should be pointed out that a) it’s literally the only thing that has ever been intimidating about me and b) Erika and I have been collecting movies since DVD first began in the late '90s and c) I have been getting discs to review for close to 15 years, so that goes a long way towards explaining how it has been amassed over the last 20 years. Also, I forgot to mention that Bromley Video is having a special this month where if you rent two movies for free, you also get a third movie for free. 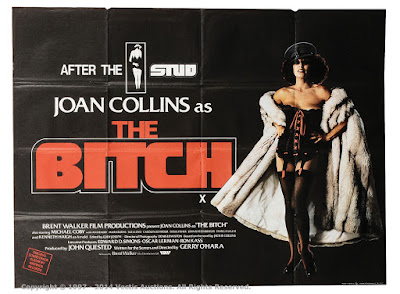 My next movie from you was The Bitch, a VERY late-’70s Joan Collins campfest based on a book by Joan’s sister Jackie. It’s the sequel to The Stud, which I have not seen, in which Collins plays a character that a person purposely named Fontaine Khaled (FONTAINE KHALED!!) who owns a disco and has sex with men. I think the mafia is also involved? But mostly it’s about people having sex -- the kind of movie sex that’s not sexy but also not sleazy, just kind of boring and shot through seven kinds of soft-focus filters. I get the appeal of the film as a trash classic, but I wish they had leaned into the trashiness a bit more. It mostly plays like a boring soap opera with some nudity in it. I’m super glad to have seen it, though, so don’t read this as any judgment on it being part of your collection. It does have one of the best themes ever: a disco song called “The Bitch” by the Olympic Runners. True story: the full version of the song runs OVER SIX MINUTES.

Do I need to have seen The Stud to really appreciate this movie? It’s so weird because I love the title and the marketing and Collins and the theme song but not the actual movie itself. What am I missing? And what’s your next title?

Stephanie: Ha! I’m going to brag that card around like no one’s business, thank you! The Bitch truly is a very tepid soap opera wrapped in really sexy packaging. I’m not ashamed to admit that my love of a few specific Jackie Collins books and the poster art got me to buy this one. I haven’t seen The Stud either, so we’re both in the dark when it comes to the Fontaine Khaled extended universe and what intricacies we’re missing out on.

Stephanie: My next film is misleading in a completely different way. Truck Turner isn’t about a truck, nor a truck driver, although being the director of a movie with that title apparently got Jonathan Kaplan the job of directing the truck movie without “truck” in the title, White Line Fever. 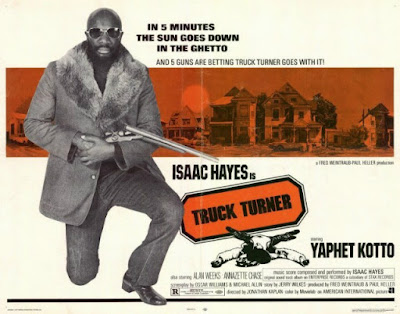 I loved this movie completely. Isaac Hayes was so incredibly charming that it elevated a lot of scenes above “classic blaxploitation” into “Hey, I actually think I want to live in this movie and be a sidekick.” Seeing Nichelle Nichols play a cruel madame twisted my brain completely, and I wanted more. This had just the right amount of trashiness balanced with action and genuinely cool characters, and anything that works a good-natured prank into being an important plot point is alright with me. If I ever earned a customer’s pick on a shelf at Bromley Video, Truck Turner would definitely make it on there -- probably in May. This is a good May movie.

Patrick: I’m so glad you liked Truck Turner! I love that movie so much and one that I love showing to people because I know they’ll love it. It’s one of my top two blaxploitation movies and one of my favorite movies of the ‘70s period.

Stephanie: So, what was your last pick?

Patrick: My last pick was Count Dracula’s Great Love, a 1974 Spanish horror film written by and starring the great Paul Naschy, of whom I know you, too, are a big fan (which makes sense, seeing as this came from your collection!). This felt like a lot of Naschy films, which is to say there was really great atmosphere, a whole bunch of nudity/sexuality, and some gratuitous violence that’s usually poorly handled in the best way. I had fun with it as a Naschy fan, even if I wouldn’t make a case that it’s a great movie. 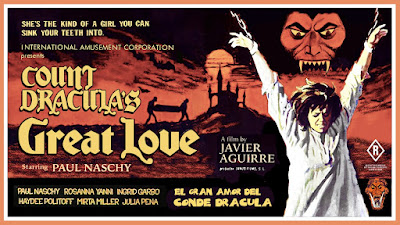 While I was watching it, I asked you a very sincere question: is Paul Naschy hot? Sometimes I can see that he is very handsome and I get it, but sometimes he seems more like a stubby character actor type. I’m cool with both, but he is so often cast as a romantic lead that I want to understand if real-life women respond to him the way they do on screen. Where does this rank for you in the Naschy filmography?

Thanks so much for lending me these movies! It’s nice to know people with such cool taste.

Stephanie: Thank YOU for lending me yours! This was fun, and I hope we can keep it going. On the Naschy scale, Count Dracula’s Great Love ranks low on the crazy and high on him being dreamy and romantic: I’m a fan. I do think he’s hot, but he also reminds me of John Belushi, who I also think is hot, so there’s my barometer.

Finally, you were nice enough to send me Julie Darling from our mutual favorite company Code Red. You warned me. You told me it was crazy. I laugh, Patrick. I’m not proud of it, but I laughed. I’ll never question Bromley Video’s employee picks ever again, though. While Spider Baby may be the maddest tale ever told, Julie Darling is the bug fuckiest one. Wow. 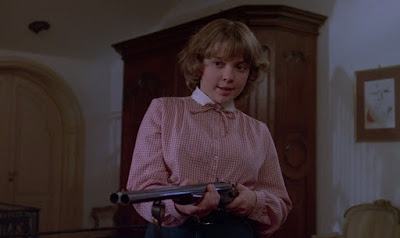 This thing has everything: incest fantasies, fluffy bed wear, serious guns held in seriously decorated '70s living rooms and some The Good Son vibes in for good measure. I mean, Sybil Danning is in it, and she’s the normal one! Isabelle Mejias is at turns adorable and completely creepy as Julie, and it’s very unsettling and upsetting and I love it. She resembles half of my high school friends in this movie, and boy did that help it get under my skin. This is quality psycho exploitation, and that you’d give me this film is a perfect example about why we’re friends. Pals.

Say, how strict are you about those late fees again?
Posted by Patrick Bromley at 12:00 PM