Reserved Seating Goes All Pacino: TWO FOR THE MONEY 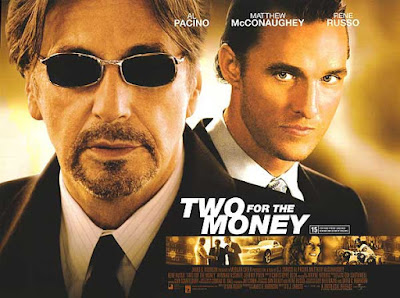 All we do is work out and pick winners.

Our review this week is of a movie no one has thought about since its release in October 2005: the D.J. Caruso directed Two for the Money, which comes from a Dan Gilroy (Nightcrawler) script. It tells the story of a former star college football quarterback named Brandon Lang (Matthew McConaughey), who suffers a career-ending injury and through several strokes of bad luck is now an operator for a 1-900 calling service. The thing is he can pick college and pro football winners with high accuracy for gamblers. This catches the attention of Walter Abrams (Al Pacino), who runs a New York sports consulting service that provides “expert” picks to bettors in exchange for a service fee from their winnings. Walter hires Brandon and gives him a new identity of success by the name of John Anthony, aka “The Million Dollar Man.” Brandon/John quickly becomes Walter’s star pupil at work and a close friend to both Walter and his wife, Toni (Rene Russo), who have long histories of addiction problems to gambling among other things. Everything’s good until Brandon/John becomes arrogant at work, causing rifts between Brandon/John, Walter, and Toni that might break them in ways not just financial.

Here’s the thing: I really like this movie. I am also aware that it is kind of bad. Revisiting Two for the Money post-yours and my Pacino impressions/fandom heavily added to my enjoyment of this movie because Pacino is super flamboyant in the film. He’s playing the caricature that many people associate with his late career. And, yet, I think he brings some moral complexity to his character. Walter could have been just another John Milton (from The Devil’s Advocate) and he’s not, instead having an interesting (if not necessarily pleasant to watch) self-destructive streak that makes his turn in the second half of Two for the Money more sad than treacherous. I also think this is a sneaky good McConaughey performance back in the time before his comeback to respected actor. He’s in full-on charming mode in Two for the Money and his swagger is just right for the character he’s playing. He’s a very entertaining lead to drive the audience through this story. I’m a mark (Ahn) for movies about shady businessmen and gambling, so this movie hit a lot of those sweet spots, especially in the early going as we learn how Walter’s business is run and Brandon is given the “hot young lawyer” treatment that happens in legal thrillers where he gets cars, luxury apartments, gadgets, pre-conference call office assistant kiss straddles, etc. in exchange for his soul. Also, some of the dialogue in this movie is utterly priceless. This was my second viewing (maybe third) of Two for the Money and I found a lot to enjoy this time. It’s junk food, but very tasty junk food. This was your first viewing, Rob, what did you think of the movie?

Rob: I’d never even heard of Two for the Money before you suggested it be our next Pacino showcase, but you were right when you told me it was special. This is exactly the kind of movie that our Late Pacino love thrives on: a loose set of scenarios that let him bounce around and have fun. You can tell that he was on set for one take, maybe two, before fucking off for lunch with a smile on his face. I love it. I’m also glad this was made when McConaughey was still playing straight men, because him getting all Jared Leto and trying to have a cheese-off with Pacino might have made the whole thing insufferable. 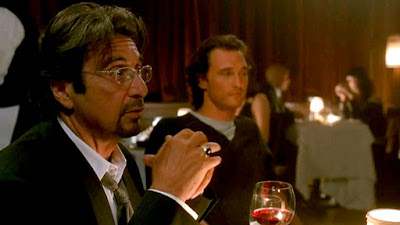 That aside, I was totally fascinated by the movie’s alternating badness and ambition. Dan Gilroy was clearly practicing ideas that would later develop into Nightcrawler (still one of my favorite movies of the decade); he seems very interested in exploring the intense, addictive nature of our vices and the way we compromise our humanity to satiate that hunger, but it was too early in his career for him to go truly weird with it. Feeling insecure (and probably facing some executive meddling), he decides to frame it in the familiar Young-Hotshot-Gets-In-Over-His-Head model, which doesn’t entirely work for what he wants to say, so he ends up saddled with a series of genre clichés that really handicap him. D. J. Caruso’s flat, lifeless direction doesn’t help, either. It reeks of early 2000s and really sucks the energy out of the film at key points. Still, I think I like Two for the Money as well. It’s bad, for sure, but it plays things totally straight and really wants to be entertaining. I can’t fault it for that. I even loved how up front it was about not being able to afford to license the NFL logos. It was like, “Yeah. New York Team vs. Kansas City Team in the Super Sunday Championship. Fuck ya’ll.” Gotta respect that.

Adam: I also love how quaint it feels in 2017. Walter Abrams’ sports betting service is basically like F This Movie! if Chaybee placed bets based on our opinions. It has this communal feel to it, right down to a weekly show. Also, this service would be out of business today, right? I am obsessed with fantasy football, but all this stuff their service is peddling (and more) is available in my ESPN league for free. Also, from a pure cheese perspective, I love that Pacino bets an entire empire on McConaughey and forgoes people who have worked for him for a long time (like Jeremy Piven, which is ok because fuck him) even though McConaughey has worked for him for less than a full football season and has tanked for large portions of it. It’s so bizarre. 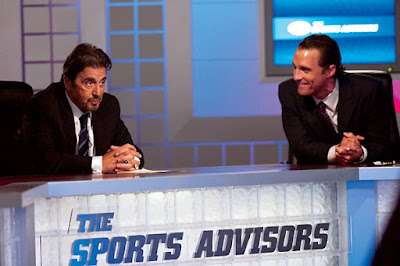 The business aspect of the film is what I like most. I think the film gets bogged down a bit in the second half when it turns into a psychological drama about addiction. To Two for the Money’s credit, it doesn’t shortchange those aspects of the story, but it also isn’t the most compelling thing to watch. Like I said earlier, I guess I should be grateful this isn’t just another one of Pacino’s evil mentor roles like in The Devil’s Advocate or The Recruit. Did you have any favorite Al moments in the movie? Also, I want to point out that I’m happy Rene Russo is given another strong part to play in a Dan Gilroy script (they are married in real life). I wish more directors took note. Her next movie is Just Getting Started, which is basically Grumpy Old Men starring Morgan Freeman and Tommy Lee Jones, where Russo is the Ann-Margret part. It’s like...why the fuck would Rene Russo be living in a retirement community? If you haven’t seen the trailer for Just Getting Started, Rob, please do so immediately. You will see it looks like utter shit and is also definitely something I would watch.

Rob: Just watched the trailer. What in the holy shit was that? That’s absolutely an Adam Riske movie, and I’m already so excited to read your review and then rent it on Redbox four months later. Anyway, I knew as soon as I saw Rene Russo that Dan Gilroy had something to do with the movie (which is sad and wrong and... seriously, why isn’t she getting more work?), and I liked her quite a bit. Like you said, the movie has these weird tonal issues in its second half that never entirely derail it, but they do make it really uncomfortable to watch at times. Especially that camcorder scene. That was really strange. I thought maybe he’d finally unleash a little Pacino Rage after that, but I was pleasantly surprised by Al’s restraint. You can tell he wanted to make something of this part. If only the directing and editing hadn’t pushed everything into that boring, flat, glossy studio thing. Maybe Gilroy should have directed it himself? Who knows. 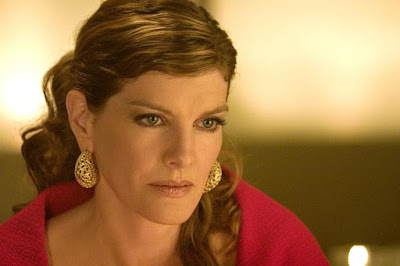 Obviously, big Al moments include crashing the GA meeting, firing Piven, and that first phone call to McConaughey. But he’s smooth in this without ever getting goofy. You never really know where he’s going to land. Wow, I actually really like this performance. This movie is the good kind of bad. Like, I know McConaughey’s character is wildly underdeveloped and the film lacks real stakes in the end, but what the hell? How many other Pacino Is Your Mentor movies are there? We’ve covered three so far, and all have been good in their own ways.

Adam: Let’s see...there’s The Godfather Part III, Scent of a Woman, Donnie Brasco and Insomnia. That’s a whole lot! I really like the scene where McConaughey is asking for more money after going 100 percent in his picks for the week and Pacino very scarily makes it clear that is never going to happen. It’s even better that he closes it with “You’re going to have to rip it out of my talons,” because I have never heard the word “talons” spoken out loud. Of course, I’ve seen it in print but never heard it aloud. I also was quoting Pacino’s line “YOU’RE A MUTANT!” constantly last week. Why was he never in an X-Men movie? Any other thoughts on Two for the Money? I’m giving it a Mark Ahn. What Pacino movie do you want to tackle next? Also, holy shit is that Jaime King scene bad!

Rob: I like that he says “tal-ONs” instead of “talons.” That’s Al. I’m also Mark Ahn on Two for the Money. It’s total junk food, and I had fun with it. Can we do Donnie Brasco or The Insider next? I want to stick with Late Pacino but I don’t want to get into Righteous Kill territory yet.

Adam: Both great Pacino movies. Let’s go...Donnie Brasco. I loved that movie last time I saw it and I think it would be funny to give it the 20 Years Later treatment twice because it’s a film so nice. Happy belated Thanksgiving, bud. Are you a Thanksgiving guy?

Rob: I like to eat, so. Yes. Happy belated Thanksgiving to you, too! I am thankful for you, for Reserved Seating, and for all of you reading.

Adam: Thank you for writing with me this year (and may it be for many more). It totally reinvigorated me with writing reviews and I have you to thank for that. And thank you for being one of my best friends. Until next time…

Rob: You honor me, sir. It’s my pleasure. These seats are reserved.