“They called it God’s Country…until all hell broke loose!”

Hollywood made a lot of blue collar movies in the 1970s. I’m talking about films that extoll the virtues of the working man and the never-ending series of obstacles that the working class face. On one end of the spectrum, you have “hick flicks,” essentially exploitation movies set in the Deep South or in some rural location where country people rise up against some obstacle. Hallmarks of this type of movie are hot rods and muscle cars, country music, trucker hats, and at least one person yelling “Yee dawgie.” On the other end of the spectrum, you have more polished, refined studio pictures that have elements of the hick flick, but seem to be about more than rebellion and stickin’ it to the man. I’d place Vigilante Force in this latter category. While it does have a lot of the elements associated with exploitation, it comes off as more of a contemporary western.

Vigilante Force stars Jan-Michael Vincent (White Line Fever and TV’s Airwolf) as a hard-working single father. His wife died in childbirth, and he’s doing his best to provide for himself and his daughter in the small oil town of Elk Hills, California. The problem is that the oil has brought it a lot of undesirable people who are hoping to strike it rich, and Elk Hills has become a modern day Tombstone, filled with violence in the streets and saloon fights where people end up dead. Jan-Michael Vincent (who I’ll reference as JMV from this point forward) goes to his estranged brother, played by Kris Kristofferson (Pat Garrett & Billy the Kid, the Blade movies) to enlist his aid in cleaning up the town. Kristofferson is a Vietnam veteran with a gruff demeanor and a history of getting his hands dirty, so JMV believes he has what it takes to get some results. Kris Kristofferson is more than happy to oblige, and he brings along a bunch of his rowdy friends to help him out. 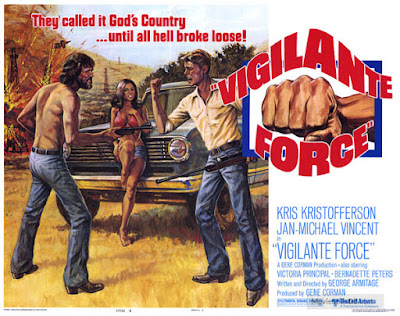 What starts off as an updated version of the Earp brothers cleaning up a crooked western town soon turns into something else entirely. Kristofferson’s vigilante justice works, but it soon becomes apparent that he’s out for more than justice. Before long, he’s extorting the people of Elk Hill and wiping out anyone who doesn’t agree with his way of doing things. Ultimately, Vigilante Force is the story of brother-against-brother with an entire town in the balance. Victoria Principal (TV’s Dallas) plays JMV’s love interest, and Bernadette Peters is a woman who thinks she’s attracted to Kristofferson until she realizes she’s in over her head. Notable members of the supporting cast include Paul Gleason (The Breakfast Club, Die Hard), David Doyle (Bosley from the Charlie’s Angels TV show), and a bevy of older character actors from the Golden Age of Hollywood who were once headliners in westerns, adventure films, and comedies of the forties and fifties. Loni Anderson and Dick Miller appear briefly, uncredited.

So let’s get into it. I’ll be the first to admit that I’m a sucker for this kind of movie. In fact, I’ve yet to meet one that I didn’t like. Part of the reason I wanted to write about the movies of 1976 is because I’m just a really big fan of this particular time and place, and you can tell that’s true because I think I’ve used the words “time and place” in each piece I’ve written during this series. Seriously, though, there’s something about 1976 that I think it just magical, and it’s here in this movie too. Consider the setting for this film, which is Elk Hills, California. That’s north of Los Angeles and a little west of Bakersfield. Bakersfield was the region that was responsible for the whole “honky tonk” movement in country music in the late sixties and early seventies. Country music had become syrupy and overproduced, and a raw sound started to emerge in Bakersfield, California that was the polar opposite. Guys like Merle Haggard and Buck Owens became associated with “the Bakersfield sound,” and this movie takes place in that same area not that long after it became synonymous with rowdy, earthy people who were giving country back to the workin’ man. See? Time and place. 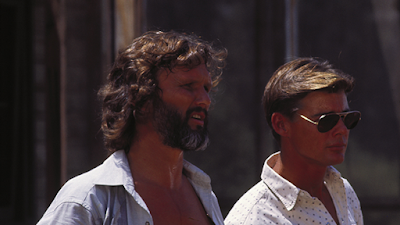 Then you’ve got Kris Kristofferson. I guess I’ve always been marginally aware of the guy, but I remember distinctly going to see Blade in theaters back in 1998 and thinking this cat who played Whistler was just too old and too weird to be taken seriously. He sounded like he’d gargled with broken glass and he looked like raisin. Then I got a little bit older, my tastes started to expand, and I realized that Kris Kristofferson was an amazing guy. He wrote “Me and Bobby McGee,” which his girlfriend Janis Joplin recorded right before she died. The song went to number one. He wrote “Sunday Morning Coming Down,” which Johnny Cash recorded and also took to number one. He was a real life “outlaw” who always seems to have been at or near the center of some really interesting times in movie and music history, but he was also a Hollywood leading man. He was pals with Johnny Cash, Bob Dylan, and Willie Nelson, but also dated women like Barbara Streisand and Carly Simon. A real study in duality, this guy.

In Vigilante Force, Kristofferson was somewhere in the neighborhood of forty, but he looks like he’d already lived two lifetimes. His face is sun-weathered and craggy, but there’s a toughness about him that’s perfect for this role. He can switch between anti-establishment maverick to cold-hearted murderer in the bat of an eye. In fact, when I compare performances, there’s something about Patrick Swayze’s turn in Point Break (the REAL one, not the remake) that feels similar. There’s a charisma there in the eyes, but also a danger. Like a sad, caged animal. Loneliness, maybe?

Bernadette Peters gives a performance that’s completely different from the one she delivered in Silent Movie, also from 1976. In that movie, she’s all va-va-voom and exaggerated sex appeal. In this movie, she’s subdued, defeated, and not at all sure where she’s going in life. When she shacks up with Kristofferson, she thinks she’s found a temporary respite, but soon that becomes dangerous and she’s almost too tired to even be afraid. It’s a really great, subtle turn. If she wasn’t so distinct in her appearance, you’d wonder if it was the same person. 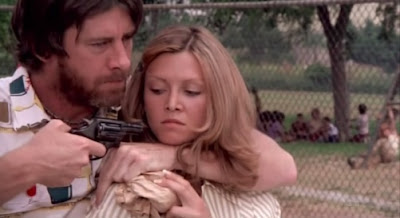 This brings me to another thing that I love about these older movies. You had more movie studios making more movies every single year (because nobody was spending the ‘70s equivalent of 300 million on a single film) and the actors had more opportunities to work in different types of pictures. It’s not uncommon to see some of these people turn up in four of five movies in a single year, often for different studios. For instance, Bernadette Peters was in three movies in 1976, had two guest spots on TV shows, and was a series regular on another show. Some of these actors worked all the time, and popped up in movies and on TV constantly. This was such a great time for fans of characters, filmmaking, and actual performances. This movie was produced by Gene Corman, younger brother of Roger, and it was written and directed by George Armitage, the guy who brought us Miami Blues and Grosse Pointe Blank. Knowing who directed this movie makes a big difference, because there’s a weird tonal disparity that I’m attributing to him. Sometimes Vigilante Force has this “good ol’ boy” tone that’s entertaining and affable. Then it erupts into bursts of violence that feel like a slap to the face. There will be a bar fight where everybody’s brawling while honky tonk music plays through a jukebox. We’re all just having a good time! Boys will be boys, am I right? Then sixty seconds later, someone gets murdered. Record scratch, hit the brakes, WHAAA? But that’s just George Armitage. I’m reminded of the convenience store scene from Grosse Pointe Blank. Or the prom scene in Grosse Pointe Blank. Or the…well, you get the picture.

The tone can be off-putting, but I actually like what Armitage does here. I know that tonal whiplash is probably not something a filmmaker should be praised for, but I dig the unique style and storytelling. It’s called the “Armitage all up in yo’ FACE” method. I’ll also add that he directs the heck out of the climax. Someone must have told him to “go big or go home” because the finale of this movie is INSANE. I’m taking machine guns, hand grenades, and a BAZOOKA. Seriously. I think someone’s a fan of The Wild Bunch! 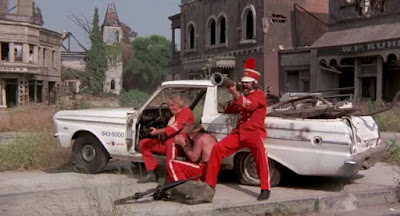 This movie seems to have a few things on its mind, but doesn’t appear all that worried about belaboring a message. Look closely and you’ll see some thematic exploration of Vietnam veterans, the psychology of the men who had returned from war, and the beginning of a different kind of war back home. This is stuff that would all be explored in much greater depth through films like First Blood and even Born on the Fourth of July. Then again, I suspect Gene Corman and George Armitage are just having fun. All you have to do is check out their exploitation roots to realize it shouldn’t be taken too seriously. Ultimately, Vigilante Force isn’t going to change anyone’s life, and that’s okay. It’s still a good time, especially on a lazy afternoon when you can just sit back and watch California explode.