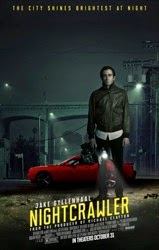 Could anyone have predicted back when Jake Gyllenhaal was making Bubble Boy that he would eventually become one of the best and most interesting actors of his generation?

Between last year's Prisoners -- a movie that's good enough but best when Gyllenhaal is on screen -- and this year's one-two punch of Enemy and now Nightcrawler, Jake Gyllenhaal is on one hell of a roll. Though he has the handsomeness and good-natured charm of a romantic leading man, Gyllenhall is drawn to weirdos and darker characters lately. That he's able to play them without calling attention to their weirdness -- the performances are much more than a series of ticks and choices (take notes, Johnny Depp) -- is what makes the work compelling. That he's fucking great in the roles is what makes them essential viewing. Nightcrawler is his best character to date and a career-best performance. He's the whole movie.

Gyllenhaal creates an all-timer in Lou Bloom, a highly motivated and savvy sociopath who gets by as a petty thief while hunting for his big break, whatever that might be. One night he happens upon an accident, paying little attention to the victims or the first responders but instead to the cameraman filming the scene. Lou finds his calling as a freelance videographer specializing in crime scenes, which he sells to Nina Romina (Rene Russo), the news director of the last-place network news show in Los Angeles. It's a career in which Lou is able to succeed very quickly, as he lacks the moral compass or ethical conscience to hold him back. He's a nightcrawler. 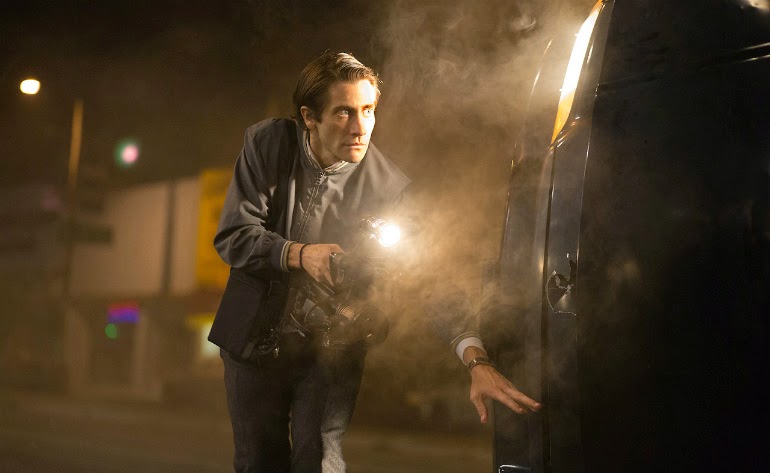 The movie marks the directorial debut of Dan Gilroy, brother of Tony Gilroy, writer of the Bourne movies and the writer/director of Michael Clayton. Dan Gilroy has been a working screenwriter since the '90s and has been responsible for writing the scripts for some bad movies including Freejack, Chasers, Two for the Money, Real Steel and the terrible Bourne Legacy. Needless to say, Nightcrawler is the best thing he's ever been associated with -- a movie that refuses to adhere to so many of the conventions and studio-note writing that marred so many of his previous scripts. While essentially a two hour character study about a shell of a human finding a profession that rewards his lack of humanity, Gilroy's screenplay doesn't feel the need to judge or moralize its characters. Like Billy Wilder's similarly-themed Ace in the Hole (a very clear influence on this one), Nightcrawler is willing to say some dark things about people in a very matter of fact way.

It's also a movie that says a lot about Los Angeles that doesn't go out of its way to SAY SOMETHING about Los Angeles. While its commentary about human nature could be true of almost any major city in the United States, there's something about about the town's connection to media and the savage opportunism that makes it very specific to L.A. (change the crime scenes to celebrity sightings and Lou Bloom is every asshole paparazzi shooting for TMZ). Gilroy films it as well as anyone since Michael Mann, focusing on real streets and ordinary locations the way only someone who knows the city can. It's one of the best L.A. movies I've seen in some time. 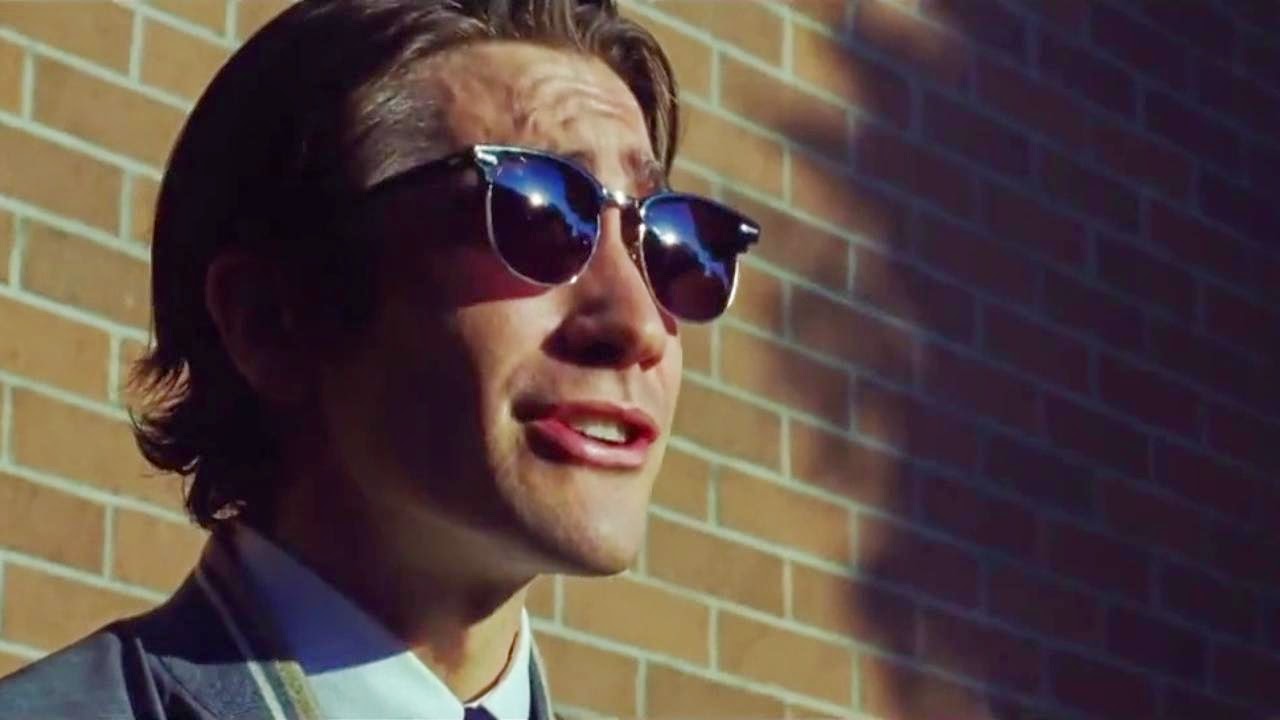 But, of course, the real draw of the movie is Gyllenhaal's brilliant performance. Gaunt, bug-eyed, intense and polite in a way that feels forced and rehearsed -- Lou Bloom isn't a person, just doing his best impression of one based on what he's read online -- this is the kind of character that will become a kind of cultural reference point as we try to describe a certain type of horrible individual ("He's a Lou Bloom type..."). Gyllenhaal is electric in the way he disappears into the character, creating a guy who is at once pitiable and yet who we begrudgingly admire -- as Hitchcock said, audiences love a guy who's good at his job. What I love about Lou Bloom is that he shouldn't be underestimated. There are so many movies that would have made his ambition a fatal flaw or his inability to connect with other people (which is explained in one of the movie's best and darkest lines of dialogue) his downfall. Instead, Gilroy's screenplay and Gyllenhaal's performance keeps Lou several steps ahead of everyone else. He's a monster, sure, but one I found myself rooting for.

It's also nice to see Rene Russo getting her first great part in a number of years (it helps that she is married to writer/director Gilroy); not surprisingly, she rises to the challenge. The only thing that really separates Nina from Lou Bloom is that Nina is able to function in normal society -- she plays the part better than he can. Movies have trained us to expect her to be repelled by Lou because of his inexperience and his blunt abrasiveness, but Nightcrawler is smart to show Nina drawn to those exact qualities -- he's who she is on the inside but must pretend not to be. Whether he's confronting her with observations about the news business or making blackmail demands to further his career, it might as well be pillow talk for Nina. 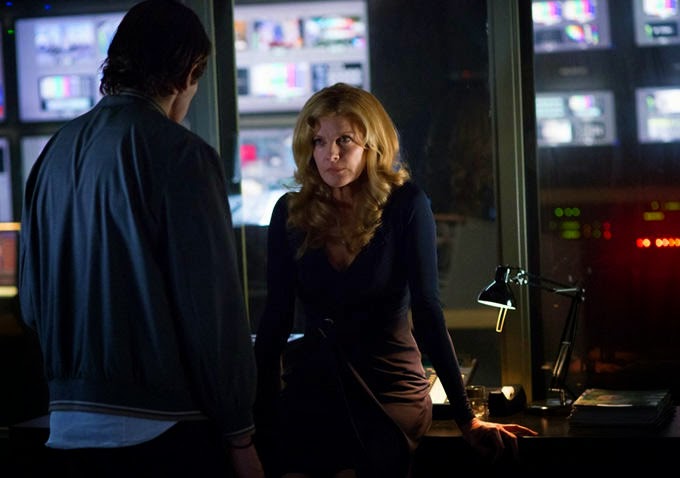 Nightcrawler is a great movie, one that works as a dark comedy, as a character study, as a commentary on the mercenary nature of today's media culture. It's the kind of cynical film that doesn't get made enough anymore, and one that I might be willing to call prophetic if it wasn't a movie so much of our time now. Jake Gyllenhaal continues to prove himself to be an actor capable of surprising us, and I have a good feeling that Lou Bloom isn't the last brilliant performance we're going to see from him. With this and Enemy, he's at the center of two of my favorite movies of the year. I would say that I'd be interested in seeing the further adventures of Lou Bloom, but that's probably not necessary. I can just turn on cable news.