“The most dangerous jaws on land!”

If you want to see what the filmmakers behind Grizzly were aiming for, all you have to do is read the tagline above. There’s no bait and switch here folks: this is literally the movie Jaws moved to land. Instead of a New England seaside community being stalked by a murderous great white shark, we have a National Park occupied by an 18-foot-tall grizzly bear. The titular grizzly is just as murderous as the famous shark, albeit a slight bit fuzzier. Literally everything else is the same. When the bear starts hunting campers and hikers in the forests, a park ranger must do everything he can to keep the community safe from attacks. This is made harder by the park supervisor, who seems dead-set on getting in the way. You guys, it’s just Jaws with a bear. 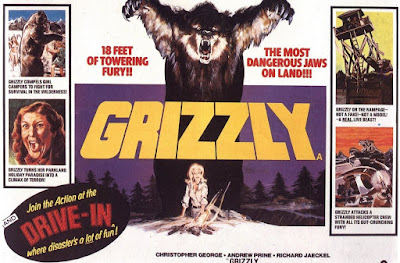 That premise sounds like it should be ridiculous (okay, it is), but somehow this movie manages to be charming and a lot of fun. Part of its success is that this movie doesn’t have the aspirations at creating something lasting and memorable like Spielberg did with his shark film. No, Grizzly just wants us all to enjoy watching this bear kill and eat people via the most gruesome ways possible in a PG film from the mid-seventies. In doing so, they pull out as many stops as they can. If a body part can be torn off a person, this movie does it. Arms, legs, heads, you name it and this movie sends it flying across the screen in slow motion. No one is safe. Not animals, not children. This grizzly has no code of honor.

To make things even better, the grizzly bear that stalks these woods seems to have been watching a lot of slasher movies, because he has a tendency to silently sneak up behind people when they least expect it and grab them in hilarious ways. This movie actually does have a real bear where one is needed (an 11-foot tall trained fella named Teddy), but most of the bear-committed-murder is carried out by crew members in bear suits. This is not as bad as it sounds. We never actually see a full-body shot of a person in a bear costume, but we see lots and lots of bear arms, especially as they snake around people’s necks from behind. If you can’t tell, I think this movie is just delightful. There’s very little attempt made at character development and stuff that would slow down the plot and keep us from watching people running for their life or getting mauled. In a lot of movies, I’d have a big problem with this, but it works for Grizzly.

I guess I should point out that this is not a normal grizzly bear that’s terrorizing the wilderness. It’s actually supposed to be some sort of a prehistoric holdover, a genus that the movie calls “pleistocene arctodus ursos horribilis.” I didn’t take Latin so I don’t know what that means, but I gather that the bear is supposed to be bigger, meaner, and smarter than your average bear (even smarter than Yogi), and these qualities make him the perfect killing machine. This bear doesn’t just kill out of instinct. No, this bear premeditates murder and carries out its vengeance in some really creative ways. I would like to nominate this grizzly to be in the slasher hall of fame alongside Freddy, Jason, Michael Myers, Chucky, and Leatherface.

Here’s the real kicker. This movie was an independent production, directed by William Girdler, the man who had helmed Sheba, Baby, starring Pam Grier, the previous year. It was a low-budget affair, shot on the cheap for somewhere in the neighborhood of 750,000 dollars, but it actually went on to become the highest-grossing independent movie of 1976. This thing is a crowd-pleaser that delivers on exactly what it promises; it was made for drive-ins, and the audiences responded.

Part of the fun for me with this movie is that it’s like a who’s who of exploitation players. I’ve already mentioned the director, but there are lots of other cast members who genre fans might recognize. Our dutiful forest ranger is played by Christopher George, who appeared in Cannon’s Enter the Ninja, the horror films Graduation Day and Pieces, and who also can be seen in multiple John Wayne films. George’s character has a job to do, but he’s going to need a little help from his friends. Andrew Prine, seen in The Town that Dreaded Sundown (the 1976 original) and the rad Empire Pictures film Eliminators, is a helicopter pilot who has the chopper that can get close to the bear. Richard Jaeckel (The Dirty Dozen, 3:10 to Yuma) is a naturalist who has the skills necessary to track and locate the bear. These three guys become a team that takes the war to the bear. The bear drew first blood. Not them. The bear drew first blood.

A couple of things really help this movie transcend its low-budget origins. One of them is that it filmed in the beautiful mountains and forests of rural central Georgia. Grizzly actually shares more than a few filming locations with the movie Deliverance. With natural waterfalls, tree-covered mountaintops, and mile after mile of unspoiled nature, Georgia has a lot to offer film companies looking for a certain environment. Years before Marvel movies and The Walking Dead recognized the benefits of filming in Georgia, movies like Deliverance and Grizzly recognized that the state’s natural beauty was the perfect background for corn-holing and animal vengeance.

The other element that helps this movie is the awesome score from composer Robert O. Ragland. I don’t think Ragland ever had a breakout film score, but he did go on to compose for a couple of Charles Bronson movies with Cannon. Really, though, I think the score for this movie is just killer (ha ha) and gives it the feel of a big production. It’s got these lush strings and sweeping orchestral motifs, conjuring up grandeur and majesty, but then it turns on a dime and goes full-horror. It’s really hard to talk about a film’s score in a written piece and do it any kind of justice, but this one is really impressive for such a cheap movie about a killer bear. Come for the slaughter, stay for the symphony.

There’s an interesting footnote to this movie. It seems like any time there’s a big indie success like this, particularly during the wild days of the 1970s, there are going to be people in charge who screw other people over, and that’s exactly what happened here. I’ve already mentioned that this movie became the highest-grossing independent movie of 1976, grossing 39 million dollars off a budget of less than a million. Grizzly had been distributed by Film Ventures International, a company founded by a guy named Edward L. Montoro, who was infamous for financing mockbusters and ripping off ideas of successful films for his own no-budget projects (like this one). When this movie was a big success, Montoro decided to keep all the money for himself, refusing to pay his director, the writers, and producers the royalties that were owed them. They sued and they won. Montoro hobbled along for another decade or so making more mockbusters and a few more cult classics, but in 1984 all that he’d built was on the verge of financial ruin. Montrose embezzled over a million dollars from his failing company and simply vanished, never to be seen again. Some say he went to Mexico under a false name, but no one really knows for sure, as he completely disappeared and hasn’t been seen since. I think this story is at least as interesting as the movies that he left behind and it’s hard not to talk about Grizzly without mentioning how awful this guy was to pretty much everyone.

For me, Grizzly transcends those shady origins and its blatant rip-off of someone else’s concept and becomes something that actually feels special. It’s directed with a lot of style, is populated by character actors that I enjoy watching, and mixes horror elements with an animal thriller to create something I don’t think I’ve seen anywhere else. Not long ago, this movie was released on Blu-ray via Scorpion Releasing in a limited run of 3000 units. As I understand it, roughly half of those units are still unsold and they’ve been given to Amazon to burn off the remaining stock, which will become available in early 2018. This statistic makes me really sad, because that means that only about 1500 people have experienced the majesty of Grizzly in high definition. If this is remotely your cup of tea, I wouldn’t hesitate to grab a copy; this movie is a ridiculous good time.


Read more of Heath Holland's writing at his blog Cereal At Midnight!
Posted by Patrick Bromley at 12:00 PM