By 1976, Fred Williamson was already a Blaxploitation icon with some of his biggest roles already behind him. The former football star had been a part of the cast of the Robert Altman film MASH before going on to headline genre classics like Hammer, Black Caesar, Hell Up in Harlem, Three the Hard Way, and some westerns with names I’m not going to write here. By 1976, Williamson was known as Fred “The Hammer” Williamson, and had carved out a reputation as a black action hero and lead performer. Along with Jim Brown, he was a justified man of action in a changing movie climate, representing strength and virility in roles that were crafted to make one audience cheer and another to feel fear.

Williamson is one of the most prolific actors of the seventies, starring in six movies in 1976 alone. With Mean Johnny Barrows, though, he did something he hadn’t done before and assumed the mantle of director for the first time. Williamson directed a total of four films in ’76, so many that it almost seems like he was working on multiple movies at the same time. As far as I’m aware, though, it was Mean Johnny Barrows that hit screens first. 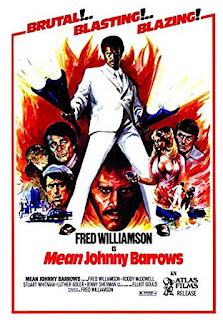 I’ve seen this movie described as a proto-Rambo film, and that’s as fair a comparison as any. Williamson plays Barrows, a Vietnam veteran who has been dishonorably discharged for slugging a racist superior officer and finds himself back in the States with few job options and even fewer friends. While the movie version of First Blood was still several years away, the novel had come out prior to Mean Johnny Barrows, so the similarities might not be coincidental. However, this movie tackles the story of returning veterans from a black perspective, showing how those soldiers had the deck stacked against them from day one. Williamson’s Barrows—like Williamson-- is a former football athlete that had a hometown reputation, but that’s where the similarities end. Barrows is a capable guy, strong and willing to work, but he’s got an understandable chip on his shoulder. When the mafia offers him a job doing their dirty work, Barrows has to choose between struggling to make an honest living in a town that would prefer he move on, or easy money as a trigger man. As much as this movie feels like a proto-Rambo flick, it also lives under the shadow of The Godfather, too.

Williamson is able to cast his film with some interesting faces. The mobsters and their connections are played by Roddy McDowell (Planet of the Apes, Fright Night), Stuart Whitman (The Longest Day, Night of the Lepus), and character actor Anthony Caruso (I know him best from an episode of the original run of Star Trek, the mafia-themed “A Piece of the Action”). An actor Williamson had worked closely with in an earlier project, R. G. Armstrong (White Lightning, Children of the Corn) appears as yet another dead-end in the path of Johnny Burrows. Williamson even got his MASH co-star Elliot Gould (!!!) to appear for a short scene that was improvised and filmed on location in half an hour. An actress named Jenny Sherman makes her movie debut here as a potentially-dangerous woman who is caught up in the mafia game. Sherman fits right into this movie, and she went on to guest-star in virtually every important television series of the late seventies and early eighties, but I think this is her only movie credit. That bums me out, because I think she had the potential to have been a player in other B-movies like this one.

Mean Johnny Barrows is a rough movie, and I mean that in a couple of different ways. The subject matter is rough because the world depicted in the film is one of street violence and open racism and police officials who are just as likely to start a fight as to stop one. There are no “good guys” in the movie, just a bunch of villains and the occasional anti-hero. But it’s rough in another way, too. You can tell that this was an early effort from Williamson as a director. Scenes are choppy, the narrative doesn’t flow as well as it should, and shots linger for too long. Instead of this turning me away, though, it makes me like the movie more because it feels like something far from the studio system and makes it approachable. Also, for a movie that’s roughly 90 minutes, a good 60 of those minutes are spent building the tension and setting the stage. I won’t say the first third is boring, because it’s not—it’s simply concerned with showing us the circumstances that create men like Mean Johnny Barrows. But that can turn away people looking for the particular brand of action that many Blaxploitation films bring to the table. Williamson seems to be trying to balance a strong social message (war is hell, but sometimes peace is just as bad for the soldiers who make it back) with martial arts action, gun play, and some sweet, sexy lovin’. I don’t think the movie juggles these elements as well as it could have, but I appreciate that it tries to be about something more.

Saying this movie is rough is not a condemnation, though. This movie is well-regarded by B-movie fans for offering the thing that we want when we watch exploitation films, but also for trying to be about something more. Barrows is sympathetic; he’s physically imposing, he’s good looking, and he is always justified in his violence. He’s just standing up for himself, refusing to lay down his dignity. We understand him and his inability to catch a break, and we’re frustrated when door after door gets slammed in his face. The movie makes it very clear (just like the movie First Blood would make it clear) that the soldiers coming back from Vietnam got a raw deal. They came back from war to a life that was just as challenging as the one they’d left on the battlefield, just in a different way. This was a very relevant topic in 1976, and Williamson succeeds at this element of his film more than he succeeds at the crowd-pleasing action that rounds this movie out.

When this movie finally decides to become a full-on exploitation movie, it almost feels strange. Not wrong, just strange. We’ve watched Barrows put up with so much, rarely losing his temper and never mouthing off to the cops. As the action on screen at last mirrors what’s depicted on the poster when Barrows puts on a sweet white suit and grabs a gun, it’s both satisfying and a little disappointing. Maybe that’s what we’re supposed to feel. The final third of this movie features martial arts battles, ninja stars, car chases, sweet chicka-bow-bow guitars, and an explosive finale, but those elements feel more like Rambo: First Blood Part II than they feel like First Blood.

For me, this is more of a curiosity. It’s a necessary piece of the Fred Williamson catalog, the movie where he first attempted to tell the story himself. The potential is there. The message is there. The action is there, too, but these things don’t always sit well against each other. It feels to me like Williamson finds himself boxed into a certain kind of movie by the audience’s expectations, and he’s trying to serve them as well as himself. Honestly, I’m more interested in the first hour of this movie than the action that ends it. Ultimately, Mean Johnny Barrows feels important for what it is, showcasing Williamson’s transition from action hero in front of the camera to thoughtful filmmaker behind it.