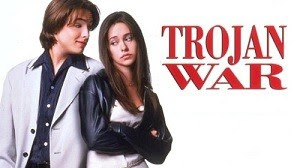 Well, I screwed up. October 1st 2017 has come and gone, and we here at F This Movie! we were too wrapped up in Scary Movie Month that the 20th anniversary of Trojan War came and went.

1997 was a big year for me. One of my other Guiltless Pleasures, Spice World, was released, I graduated high school, and the love of my life released a movie! Yes, you’re correct: Jennifer Love Hewitt, the star of Little Miss Millions and Sister Act 2: Back in the Habit, was all grown up and putting out movies. I first fell head over heels for J-Love (That’s what I call her) in her time on Party of Five. I wasn’t a particularly big fan of the show, but I was a huge fan of Ms. Hewitt. 1997 was when she really blew-up, starring in I Know What You Did Last Summer. Unfortunately, Trojan War wasn’t quite as successful.

Trojan War follows Brad Kimble, played by Will Friedle of Boy Meets World fame. Brad’s best friend is Leah (Hewitt), who is secretly in love with Brad. The problem is that Brad is in love with Brooke Kingsley (Marley Shelton). While helping Brooke study, Brad gets his one and only chance to have sex with Brooke, but he doesn’t have a condom. For the next hour, Brad gets into increasingly bizarre situations in his search of a condom. I know most of you just rolled your eyes at that description. 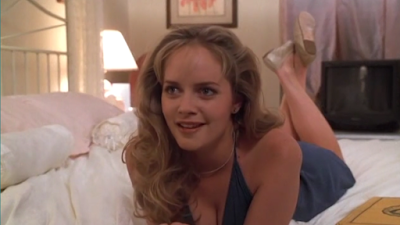 Trojan War is a throwback to movies from the late '80s -- in particular License to Drive, the movie it reminds me of most. A teenager in love with a girl gets his chance, crazy shit happens. This type of movie is repeated over and over. We saw it in the '80s, '90s and 2000s, and a lot of time it all depends on what age you were when you saw one of these “teen” movies for the first time. I am fully aware that the Goonies Derivation is in effect in this one, and watching it now after the countless other teen movies that we were flooded with in the late '90s and early 2000s, it jades Trojan War in retrospect. I still can’t help but love it. In 1997, I WAS Brad Kimble, a hopeless romantic wanting to find the perfect girl and live happily ever after, so naturally it helps that the celebrity crush I had on J-Love is the love interest in the movie. 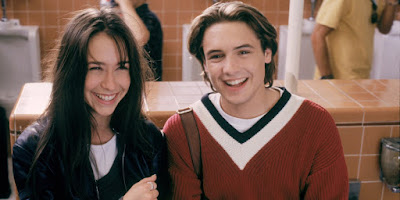 Through all of it, there are some genuine parts of the movie that make me laugh, and some comedy beats that feel like throwbacks to previous movies that I also hold dear. Some of my guiltless pleasures I love because I love the movie or because they speak to me in a certain way. Trojan War is one of my guiltless pleasures because it represents this perfect convergence of a time in my life. Jennifer Love Hewitt is absolutely stunning in the movie, and Will Friedle is funny, but don’t take this as a recommendation. If you’re looking for a really short comedy to fill some time, you can do a lot worse, but for me, Trojan War is a keepsake. It’s the music box on the shelf that you take down and is just yours. I’m proud to call it one of my guiltless pleasures.

PS. Jennifer, if you’re reading this, I know you and I are both married, but we can still run away together.