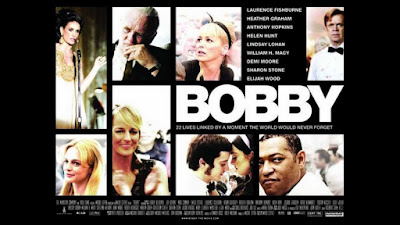 “Somewhere between our things and our stuff is us. I don’t want to lose us.”

June 4, 1968. Today, Democrats in California will cast primary votes for their presidential candidate. Among the leading hopefuls is U.S. senator and former attorney general Robert F. Kennedy, whose platform of expanded civil rights, greater economic opportunity for the working class, and an end to the unpopular Vietnam War has inspired new optimism and energy in a generation of young people whose voices have been lost, trampled on, and ignored. At the Los Angeles Ambassador Hotel (Kennedy’s California headquarters), preparations are being made for a victory speech. Campaign staffers Wade and Dwayne (Joshua Jackson and Nick Cannon) supervise the venue. Singer Virginia Fallon (Demi Moore) rehearses her introduction. Hotel managers Paul Ebbers (William H. Macy) and Daryl Timmons (Christian Slater) brace for a long night. Meanwhile, retired doorman John Casey (Anthony Hopkins) and his friend Nelson (Harry Belafonte) — both reluctant to leave their familiar posts in the hotel lobby — share stories about The Old Days. In the kitchen, busboy José Rojas (Freddy Rodriguez) is at a crossroads: will he work his mandated double shift or leave early to see Don Drysdale pitch his sixth straight shutout for the Dodgers? 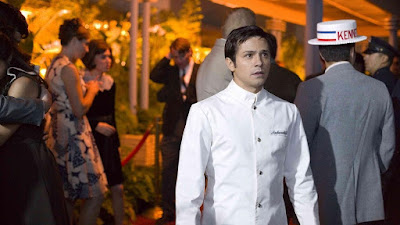 That’s just the ground floor of Emilio Estevez’s Bobby. Upstairs, the young and nervous Diane (Lindsay Lohan) prepares to marry William (Elijah Wood) in an effort to save the draftee from the front lines. Affluent Kennedy donors Samantha and Jack (Helen Hunt and Martin Sheen) hope a glitzy night out will heal their marital issues. Switchboard operator Angela (Heather Graham) meets Ebbers for a lover’s tryst. Campaign volunteers Jimmy and Cooper (Brian Geraghty and Shia LaBoeuf) drop acid with hippie guru Fisher (Ashton Kutcher). There’s also Laurence Fishburne’s avuncular chef Edward, Mary Elizabeth Winstead’s aspiring actress Susan, and Sharon Stone’s Miriam Ebbers, the hotel’s head stylist who knows her husband is having an affair. If it isn’t obvious already, writer/director Estevez’s Ambassador Hotel encapsulates a diverse American population on the edge of a massive social upheaval, a country whose restless soul is desperate for salvation. Everyone in Bobby is waiting for something — a secret to be revealed, a dream to be achieved, a fear to be assuaged. The entire film has a lump in its throat. But by borrowing the interwoven ensemble structure of classics like Nashville and Grand Hotel (the latter of which is directly referenced), Bobby reinforces the power of hope in the face of grave despair. 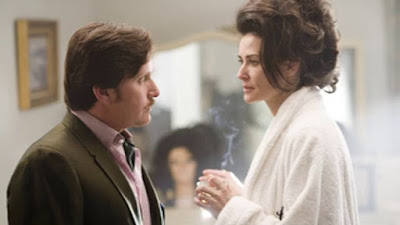 Not satisfied with a truly dizzying number of storylines and characters, Estevez (who also stars as Fallon’s henpecked husband, Tim) layers in archival footage of Kennedy’s speeches and campaign appearances to establish an even broader thematic landscape than his limited setting might traditionally allow. This creates a kind of ticking clock for the Ambassador’s interpersonal drama, as if it all must be solved before (or will be solved when) Kennedy arrives. That drama is often of a political or sociological nature, of course, like in the case of Timmons, who is relieved of his position after he refuses to allow his kitchen staff time off to vote. “They’re not going to vote,” he insists. “Most of them are illegals. They can’t vote.” This fuels the rage of Miguel (Jacob Vargas) who insists that Mexican Americans must rise up in revolution if they’re going to gain the same kind of social agency that African Americans had (such as it was in 1968). He chides Edward for his deference to Timmons’ authority, but the older man reminds him that his anger will consume him long before it will ever compel those in power to cooperate. Nearby, intrepid Czechoslovakian reporter Lenka Janácková (Svetlana Metkina) insists that, despite constant rebuffing from the campaign due to her socialist associations, she won’t be moved from the hotel’s lobby until she gets to ask the candidate some questions.

Bobby’s narrative is far from propulsive, though, and most of these plot threads — some only two or three scenes long at the most — are quickly laid to rest in a hopeful montage of reconciliation coupled with the senator’s arrival. It’s a bit of a cheat, sure, but these small pieces were always meant to be part of a larger whole, and their resolution is ultimately necessary in order to make room for what comes next. Bobby is more a tone piece than anything else, an effort to capture the tenor of a place and time when American culture was teetering on (and would ultimately fall off) a perilous edge. 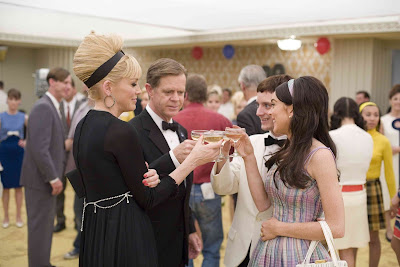 As Kennedy speaks and the gathered cast looks on in admiration, his symbolic role as a bastion of empathy and cooperation is seemingly confirmed. Some characters shake his hand, others are merely struck by his words, but only José (based on real-life witness Juan Romero) is with Kennedy as he lays bleeding from gunshot wounds. Estevez knows that we know this is coming, and he knows that it’s going to fly in the face of all the hope-y change-y sermonizing he just showed us. But that’s how it’s supposed to feel. It’s supposed to be cruel and shocking. It’s supposed to take the wind out of our sails. Like that of MLK, Malcolm X, and especially of his brother Jack, the murder of Bobby Kennedy is supposed to reek of profound and irredeemable anticlimax.

“This is the breaking of a man's spirit by denying him the chance to stand as a father and as a man among other men, and this too afflicts us all,” Kennedy said in the wake of Martin Luther King, Jr.’s assassination, just two months before his own. “We must admit the vanity of our false distinctions among men and learn to find our own advancement in the search for the advancement of all.” Estevez lays snippets of this speech over footage of Bobby on the ground, on a stretcher, and finally in an ambulance. He lays it over footage of Cannon’s Dwayne (styled purposely after Malcolm X) throwing chairs and sobbing in anger. “No one left but Bobby,” he insisted earlier in the film. “No one.” But we die and we are reborn. We lose and we play again. No matter the cost, no matter the loss, someone somewhere is carrying on. Bobby is nowhere close to a great movie. It’s cheesy and overwrought. It’s melodramatic and naive. But it’s also earnest and innocent; it believes what it’s saying, and it wants us to listen. For that, it remains engaging and re-watchable. For that, it makes me think of my own Bobby — my son, who celebrates his third birthday today. I wrote this for him. I want him to know that I believe in him, that he changed my life, and that no matter what, he will find his own advancement in the advancement of all. 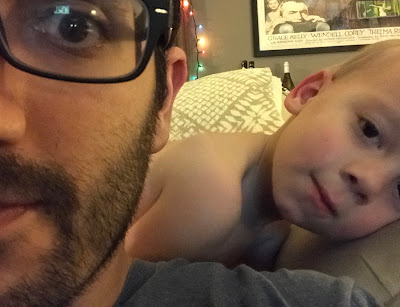