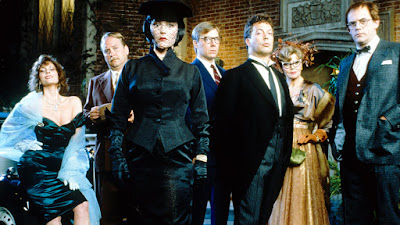 We're stuck! And since we're not going anywhere, so let's watch a bunch of movies!

Today's 24 Hours of Movies theme was suggested by our very own Stephanie Crawford. 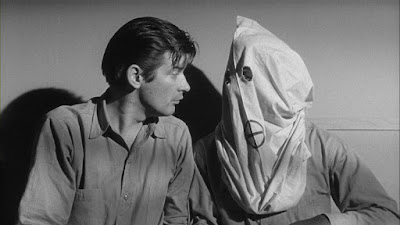 A lot of times, I like to ease into these marathons and kick off with something light and easily palatable. But seeing as this theme rarely lends itself to light and easily palatable -- we're talking about movies in which characters are trapped somewhere, after all -- I say we just dive right in and begin the day with this classic piece of paranoia from the great Samuel Fuller. Peter Breck plays a journalist who has himself committed to an asylum so he can solve a murder; once in, however, he's treated like every other patient and subjected to shock treatments. Slowly, he really does start to lose his mind. It's a story we've seen before, but Fuller is incapable of bullshitting and strips everything away but the story and the madness. It's going to throw us off balance right from the jump, but maybe that's appropriate for this kind of marathon. 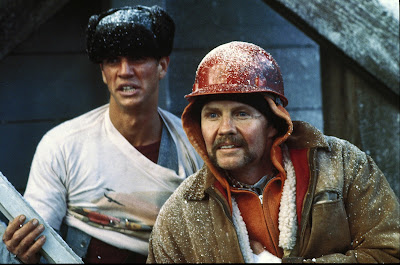 Confession! I have never seen Runaway Train. I thought about programming Snowpiercer here, but that's a little too dystopian to immediately follow up Shock Corridor. We have all night to want to kill ourselves. Instead, I thought of this "stuck on a train" movie that I've never seen and about which I've only ever heard great things. This was the Golden Age of Eric Roberts, which can only help matters. 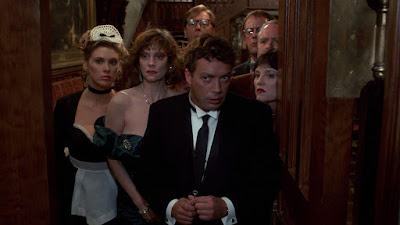 I've always liked this movie, but in recent years I have discovered that it is straight beloved by a lot of movie fans, including our friend and regular guest Heather Wixson, who counts it among her favorite movies of all time. It's a movie that shouldn't work -- multiple endings, based on a board game (remember how we all laughed about Battleship? And that was before we saw it!) -- but gets by on the chemistry of its amazing ensemble cast and Jonathan Lynn's gift for screwball timing. There are plenty of mysteries about a group of people all stuck in a big house together, but I don't know if there are many funnier than this. 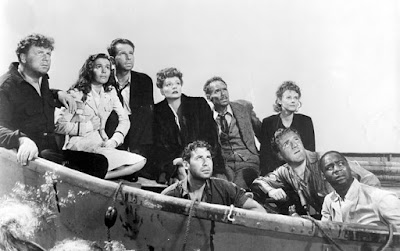 Confession #2: I have never seen Lifeboat! Rob wrote a great piece about it (linked in the title) and it's directed by Alfred Hitchcock, so I have no excuse. This will be a great opportunity to check another title off my "To Watch" list, and the placement works because it's early enough in the lineup to be more than the hazy blur that later movies are probably going to be. 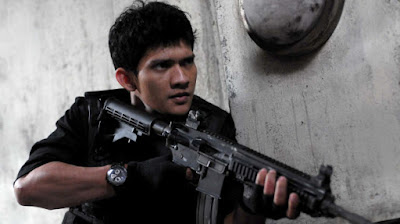 Of course there needs to be an action movie in here somewhere, if only because the "one location" action film is such a staple of the genre in the post-Die Hard world. This one seems like it would play great here because it has such a different vibe and energy from everything else that surrounds it -- a pretty much story-free epic about a group of cops who have to fight their way through an entire apartment complex. I still can't concede that it's one of the best action movies ever made in terms of plot and character and many of the things we look for in movies, but for pure action and fight choreography, I'm not sure it's ever been topped. I think it has almost ruined the action films that came after it because none of them measure up. And none of them really can measure up. 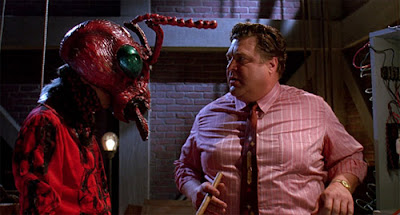 This is a little bit of a cheat because it doesn't really center around a single location (the movie theater doesn't count, as everyone is free to come and go). But there's a sequence near the end involving a bomb shelter that's one of my favorite sequences in the movie, both because it's beautiful and because it encapsulates what makes this movie -- still Joe Dante's best and one of my very favorite movies of all time -- so completely special. I don't need much of an excuse to program it here. 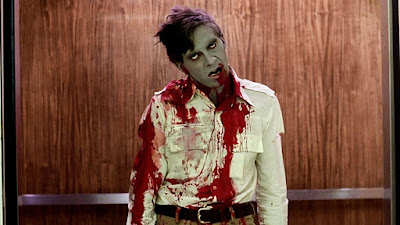 With his original Dead trilogy, the late, great George A. Romero perfected the "bottle" horror movie, but this one is still my favorite. Four survivors barricade themselves in a shopping mall during a zombie apocalypse, and the result is one of the best horror movies ever made. I love the characters, I love the action, I love the gore, I love the humor, I love the social satire. I love that George Romero immediately recognized the American shopping mall for what it was and changed the way we see it forever and ever. 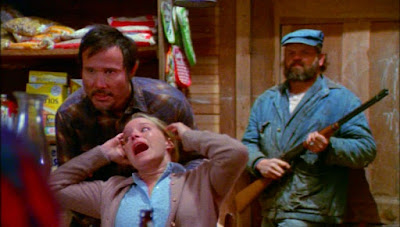 This was the first movie I thought of when Stephanie suggested this theme, because I am utterly lacking in creativity and imagination. Also because I just watched it a week or two ago. A group of college kids stumble upon a small town and witness a hillbilly (Henry Silva, destroying scenery) murder his wife. Naturally, he traps them there and comes after them next. This is a surprisingly good movie, which William Fruet (Killer Party, Blue Monkey) directs with efficiency and a nasty streak. It moves quickly enough to play well at midnight, carrying us into the overnight section of weirdness with a nice jolt of adrenaline. 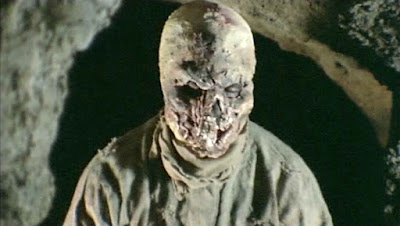 Speaking of weirdness. It's predictable, I know, but I love programming some fucked up Italian horror in this spot every time I plan one of these marathons. Here's one about a group of people who get trapped in a house with a bunch of zombies outside, because Andrea Bianchi has seen Night of the Living Dead. This one is most famous for the performance of Peter Bark, an adult little person playing a young boy who still insists on breastfeeding from his mother. The movie is pretty trashy and odd all around (not to mention sort of inept), but the stuff with Bark is what puts it squarely on another planet. 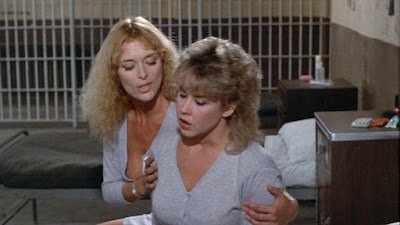 I'm not going to program 24 hours of movies about people being trapped and not program at least one women in prison film. This is one of my favorites. It's energetic and impossibly sleazy and John Vernon is incredible and it gives the great Sybil Danning one of her very best roles. Elric Kane knows what I'm talking about. No way anyone is sleeping through this one. 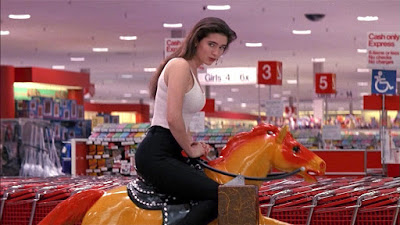 After a night of violence and trash, let's lighten the mood once again with this coming-of-age comedy about a compulsive liar (Frank Whaley) who is trapped overnight in a Target with the girl of his dreams (Jennifer Connelly). The movie is hardly one of writer John Hughes' best, with a Frank Whaley character who's hard to like and a pair of burglars (played by Dermot Mulroney and his brother) who are out of a different film. But it was my birthday movie in 1991 (I ate pepperoni pizza at a mall food court, bought comic books, and saw this movie, so it was almost as perfect a birthday as I can remember) and there's a lot of stuff with Jennifer Connelly that literally turned me into a teenager overnight. 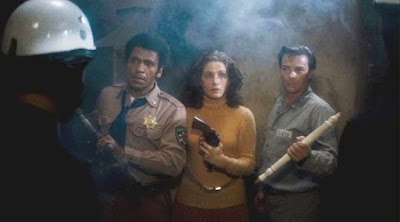 One of the best "trapped" movies of all time is a John Carpenter movie that gets better for me every single time I see it. It has one of my favorite Carpenter scores and a really underrated ensemble cast (RIP Kim Richards). I know I should probably put Rio Bravo in this spot instead, since I like that movie and it's the obvious inspiration for Precinct 13, but just try to stop me from showing this one while we eat donuts for breakfast. 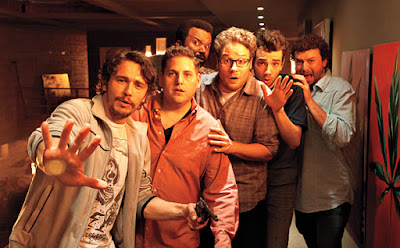 It seems to close out our marathon with the end of the world. At least it's a comedy -- and a really, really fun at that, in which a bunch of famous Hollywood actors (playing themselves) get stuck inside James Franco's house during the apocalypse. I know this movie doesn't get talked about a whole lot anymore -- it has joined the ranks of constant reruns on FX, which immediately devalues most movies -- but joke for joke, I think it's one of the funniest movies of the last five or six years. Plus the ending is very sweet and upbeat, which will make for a nice way to wrap up the last 24 hours. We may be delirious from exhaustion, but at least there's a dance party waiting for us in heaven.
Posted by Patrick Bromley at 12:00 PM