Pop quiz, hot shot: you’re a wealthy industrialist living in Greece and your family is kidnapped by local terrorists seeking to further their cause. Both your family and the terrorists are now inside a fortress at the top of a mountain and there’s no way to get to the peak without being seen. What do you do? Answer: you conduct a daring rescue mission using HANG GLIDERS.

Sky Riders is “the hang glider movie,” yet another product of the weird and wonderful world of 1976. This 20th Century Fox movie filmed entirely in Greece, giving it an exotic flavor and production values that make it feel wildly different from standard studio-produced fare. The movie has a low budget (reported to be around $350,000), but the film has to work around those limitations and the end result is better for it. Stunts are practical and the spectacle is real, not carefully crafted in special effects studio. Sky Riders has that slow burn I associate with seventies movies, especially the ones that are more political in nature, but this movie absolutely delivers on the promise of the poster. Like Grizzly, this movie draws viewers in with the promise of a something they haven’t seen. Unlike Grizzly, though, Sky Riders actually has intrigue at the heart of the plot, and takes time to breathe and lay the groundwork for what’s to come. 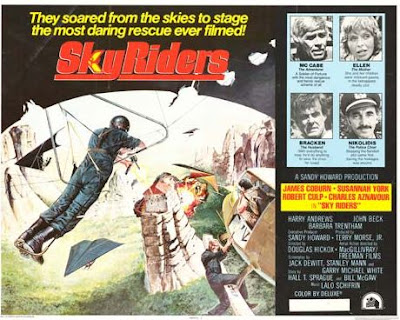 Sky Riders has a killer cast. Robert Culp is the previously-mentioned wealthy industrialist, and he’s a great mid-seventies choice for this particular role. You might remember Robert Culp from the TV show I Spy or his notable appearance on The Outer Limits, or maybe even his run on the eighties TV show The Greatest American Hero. This is crucial, though: as I work my way through the movies of the 1970s, I’m learning that you can judge the caliber and popularity of an actor from that decade by whether or not they played a murderer on Columbo. By this standard, Robert Culp was on top of the world: he was on Columbo FOUR TIMES, playing different characters each time. He must really be somebody. Culp’s wife is played by Susannah York (They Shoot Horses, Don’t They) and she’s the embodiment of a strong female lead in a time where that was not necessarily the standard. When the terrorists come to her house wearing what looks like metal hockey masks to take her and her children away, she’s defiant and bold. When she and her kids are kept in a cell in the mountain-top fortress, she loses none of her steely resolve, refusing to cooperate and giving no ground. Her performance might as well be a lesson on how to stonewall a terrorist.

The real star of this movie, though, is James Coburn, the famous tough guy known for films like The Great Escape, The Magnificent Seven, and the swinging-sixties spy classic Our Man Flint and its sequel, In Like Flint. Sadly, Coburn never starred on Columbo, so we’ll never know how his career could have taken off if he had. Anyway, he seems like a cross between Indiana Jones and a mercenary, flying his seaplane into dangerous areas and hauling deadly cargo. Comparisons to Baloo on the ‘90s Disney cartoon series TaleSpin would not be unfounded. Coburn and Culp have a weird relationship that the movie only partially explores. In the story, Coburn is the ex-husband of Susannah York and the father of a son that Robert Culp is now raising. But Culp doesn’t have resentment for Coburn; he actually seems to kind of admire him. It’s hinted at in the movie that Coburn agreed to walk away from his young family because his lifestyle was just too dangerous. He’s a gypsy, and so he and Culp are forever tied to one another. They respect each other. Weird, but totally seventies.

So we’ve got terrorists (I should mention that we recognize the terrorists because they all wear matching red t-shirts) holding hostages high on a mountain top in an impenetrable fortress (this movie played in some markets under the title Assault on the Forbidden Fortress). When Coburn realizes that there’s no way to get to the top of the fortress from the ground, he starts to think outside the box, and that’s where this movie really takes off (see what I did there?). Coburn hires a local aerial hang-gliding circus to teach him how to operate one of the flying devices himself and to join him on the rescue mission, because why not hire civilians to risk their lives facing terrorists? A significant portion of this movie takes place in the air, and the stunt work and aerial photography feels really special. This is absolutely a gimmick movie, and the premise is delivered in spades. The hang gliders factor heavily into the entire second half of the film as this becomes a black ops snatch and grab mission. It’s Zero Dark Thirty on summer vacation!

The more sensational aspects of this movie are absolutely the reason to watch it, and I can only imagine the difficulty in setting up some of the shots we see. Logistically, it must have been really difficult to mount cameras onto the hang gliders for close ups and still give the viewer a sense of where they are in space. The stunt work is equally impressive. While this movie doesn’t feature a ton of over-the-top kills, there are still some really impressive stunts. For instance, in the balls-to-the-wall third act in which all hell breaks loose, Coburn jumps onto the landing gear of a helicopter in flight. We’ve all seen a stunt like that before, but the director goes out of his way to show us that this is really James Coburn hanging from this chopper. There’s a shot that starts tight on the actor and then pulls back, and we see that this is really him and that he’s really hanging there, thousands of feet above the ground. I’m not used to seeing lead actors doing dirty work like that.

The above shot is startling -- not simply because Coburn is one of the leads and no modern movie would let an actor perform something like that for insurance reasons, but also because Coburn is no spring chicken in this film, and he’s not alone. So many people in this movie are the opposite of “young.” Coburn is pushing fifty, Culp is in his forties, and Susannah York is in her late thirties (but honestly looks older). The Greek authorities are all middle-aged, and even the guy in charge of the hang glider troupe is in his thirties, but looks worn out in the same way that everyone in the seventies did. I’ve been so trained by the modern movie marketplace that I forget that big studio movies didn’t always cater to young people. Back in the seventies, it was okay for younger and older people alike to go see the same movie and have different experiences. Coburn’s a Stallone-level tough guy in this movie, but he’s not jacked to the gills with muscles on top of muscles. Robert Culp is a very believable dad in over his head, but he’s not a hunk. Everyone in this movie just looks kind of normal and plain. The people in this movie mostly look like the ones you see when you walk down the street. I miss seeing that in movies.

One of the most interesting bits of trivia about Sky Riders is too juicy not to repeat. A Greek electrician was accidentally killed during a planned explosion on the set (which is terrible), and two of the film’s producers were arrested by the Greek authorities. They were held for several weeks and the American crew member behind the accident was going to be arrested and prosecuted until the producers settled for $250,000, at which point everyone was finally allowed to leave the country.

It’s kind of a bummer that a movie as special and unique as Sky Riders has become so obscure. Shout! Factory released it on DVD back in 2012 paired with another Coburn film, The Last Hard Men. Why this never got the deluxe Shout! Factory Blu-ray treatment is beyond me, though. The UK-based distributor 101 Films released this on Blu-ray in 2017 in the international market. I think the movie is very satisfying and could only have been made in the window of time in which it was created, but part of me wonders what could have been if it had been made just a little bit later. This is the same kind of gimmicky exploitation that The Cannon Group excelled at creating, and it’s fun for me to imagine what could have been different in this movie had been made in, say, 1984 instead of 1976. How would this movie play with someone like Chuck Norris in the James Coburn role? Or with Charles Bronson as the wealthy American industrialist?

It’s fun to play “what if,” but I’m really happy with this movie just like it is. It combines the methodical plotting of mid-seventies thrillers with the spectacle of the budding blockbuster. It’s without a doubt an action movie, but serves as a sort of prototype for a different kind of action movie that would soon be everywhere with the rise of Sly and Arnold and Chuck. You can see traces of the over-the-top escapism that would soon be the status quo. Sky Riders exists in that magical sweet spot between the minimalism of the early seventies and the excess of the blockbuster era, in that strange, wonderful little pocket called 1976.