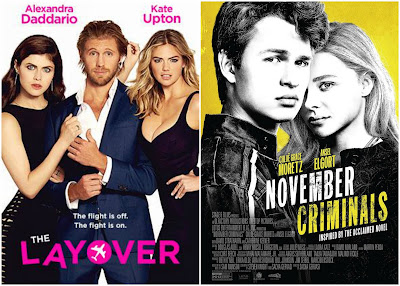 A Baywatcher, an Ass-Kicker, a Verlander, and a Baby Driver.

But don’t hold that against the Alexandra Daddario/Kate Upton sex comedy, because it’s not the worst thing ever.* It’s uninspired, for sure, and it never reaches the raunchy absurdity of Bridesmaids or Girl’s Trip, but it’s far from unpleasant. Inexplicably directed by Academy Award nominee William H. Macy and co-written by Rickety Cricket from It’s Always Sunny in Philadelphia (David Hornsby), the film pits Daddario’s Nice Girl Kate against Upton’s Hot Mess Meg in a battle for the douchiest douche-bro ever (Matt Barr, playing Ryan). The pair of lifelong friends, exhausted by their latest personal and professional failures, decide that a weekend in Fort Lauderdale will clear out the cobwebs and get them back on track. Running into Ryan on the plane ignites a competitive spark between them, however, and because Kate has finally had enough of Meg’s one-upmanship (we’re to assume she has a history, though we’re never shown), they begin an epic battle for vaginal supremacy. 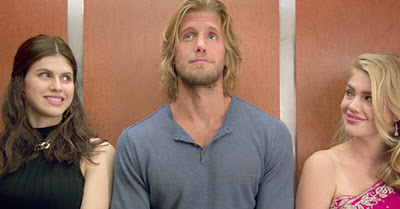 The Layover makes oblique references to The Bachelor and Lord of the Flies, suggesting that the girls have nothing to lose, aren’t here to make friends, and will ultimately learn the error of bloodthirsty competition once all semblance of their humanity has been stripped away. But it never gets the guts to go there in a meaningful way. Instead, that enlightenment comes only after they both bone Ryan, realize he’s terrible, and remember that they’re absurdly gorgeous supermodels who can go anywhere and do anything with literally anyone in the world. No, I know, this is a movie. But even dumb sex comedies deserve some stakes and relationships worth investing in. While both characters get up to shenanigans (Meg forces the acrophobic Kate into a hot air balloon; Kate shows Ryan embarrassing high school photos of Meg — Meg is clearly better at this), neither is pushed to any kind of real breaking point, which flattens their already murky interpersonal drama even more. After they crash Ryan’s wedding, the girls simply go home. Kate decides to be more assertive at work, while Meg (who has since fallen for Breaking Bad’s Matt Jones) gets her own place and goes back to school. No one seems that bothered, and they all move on. Let’s follow their lead.

Imagine Say Anything’s Lloyd Dobler: Sensitive, intuitive, a little headstrong. He’s an analog rebel with cool hair and a long coat. He likes books and gets along with his dad. He and Diane Court have just made love for the first time, and they seem to have something real, maybe more real than either of them expected. There’s whimsy in the air. People are smiling for no reason at all.

That’s November Criminals, starring Baby Driver’s Ansel Elgort and Kick Ass’ Chloë Grace Moretz as Addison and Phoebe, two D.C. teens whose world is rocked by the gangland murder of their friend Kevin (Jared Kemp). Refusing to believe that his jazz-banding, book-clubbing bro could have been mixed up in anything uncouth (and apparently the only person who doesn’t assume Kevin is in a gang just because he’s black), Addison sets off on a one-man investigation that gets him tossed from school, alienated from Phoebe, and decidedly in over his head. His defiant pursuit of The Truth also puts him at odds with Phoebe’s domineering mother and his own recently widowed father (the great Catherine Keener and David Strathairn, both here doing community service for what I’m sure are very noble reasons), but Addison is undeterred. Armed with a pager and personal diaries recorded on VHS-C tapes, he infiltrates the elite Washington underbelly in a Thirteen Reasons Why-esque crusade to clear Kevin’s name. 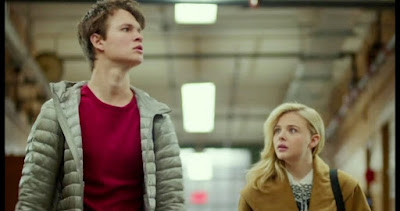 There’s a whiff of Rian Johnson’s high school noir Brick throughout November Criminals (I know I keep referencing other media, but there’s so little to work with here that it feels necessary). Like The Layover, however, this film lacks the balls or the character to distinguish itself in its genre. Frankly, it’s boring as all fuck. Addison is bland and naive, and Phoebe, though earnest and capable enough, is never given anything more to do than hold his hand and pout. The plot’s mystery (such as it is) gives lip-service to the crises facing Washington’s urban youth without really addressing it in any way, instead gravitating toward the simple comfort of the more affluent suburbs when things get too tough. Addison follows a few leads, trips over his own feet, and then the movie ends. He displays no heroic qualities and provokes little more than mild irritation from those around him. In perhaps the film’s most unintentionally incriminating gesture, the pulse-pounding climax ends with Addison shot harmlessly in the shoulder.

To be fair, I don’t think November Criminals is anyone’s fault. It wasn’t made in bad faith, nor are there any clear weak links in the cast or crew. Ansel Elgort gets sufficiently angsty. Sacha Gervasi’s (Hitchcock) direction is straightforward and serviceable. David Strathairn’s widower has a few quiet moments of sheepish charm (most of them involving food), and Catherine Keener’s boozy D.C. luminary rightfully steers her daughter away from the dour and chinless Addison. It might be the screenplay (co-written with Gervasi by Steven Knight, writer and director of the criminally-underrated Locke), which is missing those crucial pieces of connective tissue that would normally capture our attention; for example, it’s not clear that Phoebe and Addison aren’t a couple until after their second bone session, after which they decide they should be. A clear thematic link could also be drawn between Kevin’s death and that of Addison’s mother — we expect that leftover feeling of helplessness to manifest throughout the film — but it’s mostly forgotten until the closing credits. Most frustrating of all — and I feel like I keep saying this in Redboxing columns — I have no idea what November Criminals means.