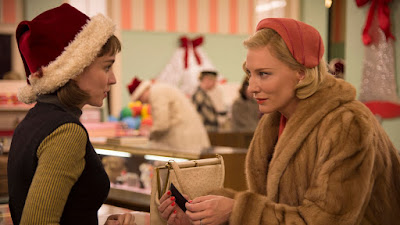 There’s something about holiday movies that are just so straight.

I don’t need to watch a woman with a complicated past get kissed by a man as a delicate snow flurry dusts their eye lashes. I don’t need stories about moms and dads rekindling their marriages for the kids as presents get unwrapped. This isn’t a call to action to stop making or enjoying those movies. No, this is my cold queer heart needing other storylines to bundle up in as the temperature dips below 30. I need Christmas movies I can relate to. Movies like Gremlins, Eyes Wide Shut — hell, I need more Christmas movies like Carol. 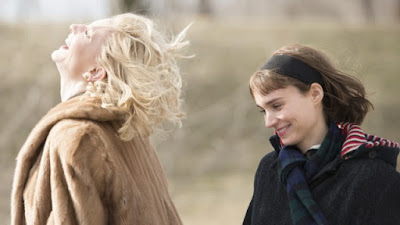 Carol is a cup of steaming hot cocoa on a cold holigay night. It’s the sweet relief of relatability in a sea of explaining your romantic situation/preference to family members that are earnestly trying REALLY hard with your new name but just aren’t there yet. Carol is a bridge that connects gay world with straight world on Christmas night like the bus in Halloweentown. Carol. Is. Everything.

In this fabulously art directed mid-century combination of Hitchcock and Saphhos, we meet Therese Bellivet. She’s sweet, but wide-eyed and nervous. She’s got a good job at a department store, has a clean cut and well meaning boyfriend and, yet, something isn’t right. As she navigates scene after scene, all tinged with that off-mint-green that’s inherent to contemporary interpretations of the '60s, we are shown — with such few words and no need for explanation — the exact nature of Therese Bellivet’s discomfort. We meet, through Therese’s eyes, the grandeur that is Carol Aird — the glimmer of store-lighting on her polished nails, her one sided smirk, her coded flirtation. The longing that is conjured in this love story is as staggering as it is accurate to the time.

Even in 2017, queerness is oft relegated to the realm of illness. Sure, now we’re afforded more legal and societal protections, but back in the '60s (... and '70s… and '80s… and '90s…) there were virtually none. In fact, being queer was an arrestable offence and it was near to impossible to find the pockets of queer folks that did exist. So imagine, you have this boyfriend with whom you know you don’t fit, you don’t have words to describe how you’re feeling because no one you know is queer, and among all of this discomfort, is a beautiful woman named Carol. 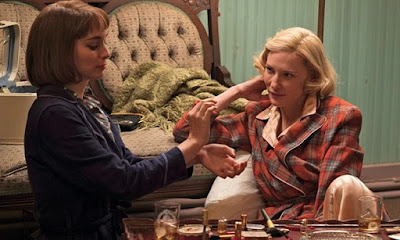 And that’s what’s beautiful about this film — there is an incredible amount of pain and discomfort experienced by the two women; Carol is on the cusp of losing custody of her daughter for having had relationships with women, Therese is lost in directionless early adulthood...and yet, neither woman is framed as a tragic tale through which the viewer can get their grief rocks off. As a queer person, I get so frustrated with movies that frame very normal, day to day living experiences as ones with huge gay asterisks attached. I don’t think about how gay I am when I’m attracted to someone. I just am attracted to that someone. And while that sounds like a really stupid concept to bring up in a movie review, it’s kind of the catch of most queer love stories. Aside from Carol and Moonlight, I really can’t think of another gay love story in mainstream media that isn’t playing the queer card as an almost gimmick or, worse, as a punchline to a goof in a home-for-the-holidays blockbuster. No, Carol lets Therese and Carol’s love grow just like any other love story in any other drama, a drama that is art directed and paced with an acuity that transcends the circumstances of the characters’ relationships.

The romance between Carol and Therese, unlike many a romance movies, is one through which both women end up better. After proof of the nature of their relationship threatens to strip Carol of visitation rights, she isn’t forced, but rather quite readily owns her “questionable morality” and demands a compromise with her ex-husband. In one of the best shut down scenes I’ve ever seen, she says, "What use am I to [Rindy], to us, if I'm living against my own grain? So that's the deal. I won't — I cannot — negotiate anymore. You take it or leave it. But if you leave it, we go to court." And with that, Carol sets herself free. Sure, the love between her and Therese helped grease the wheels and is by no means unimportant, but I think that both women needed to create their own stabilities before we are allowed the potential of possibility.

Carol isn’t about a lurid affair. It isn’t about that one gay relative framed as the other. Truly, it’s almost hard to describe at all beyond a really honest and emotional look at the beginnings of something real. The audience doesn’t walk away feeling bad for those queer ladies; they are meant to walk away with the feeling of what happens next? Where do our characters — where do we — go from here? 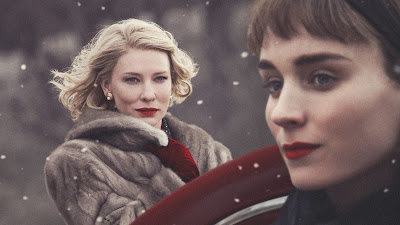 I hope that this year brings more femme love, queer love, and other less often discussed love to the big screen. It goes without saying that 2017 was not great to the queer and trans community (especially QTPoC), but there’s something to be said about the dose of relatability a well told story can provide. More and more movies about queer characters seem to keep popping up. Maybe, eventually, we won’t have “That Gay Movie” Carol, but we’ll have so many gay movies that the answer will inevitably which “which one?”

Or, if my Christmas wish comes true, every movie in 2018 will be gay.
Posted by Patrick Bromley at 12:00 PM