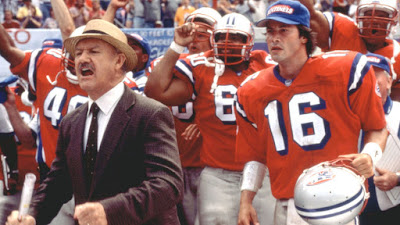 Which gridiron rejects will get rejected again?

• Scott Bakula plays Paul Blake, a former high school football star who didn’t play college ball so he could take over his family’s farm. Now with years of eligibility left, he suits up for the disgraced Texas State University Armadillos but has problems leading college players half his age. He’s stand-offish (won’t hang out with them outside of practice and games at first), often at odds with his by-the-book coach and perpetually looking tired/like he needs to take a crap. 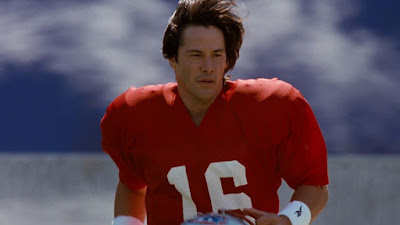 • The angelic Keanu Reeves plays the angelic Shane Falco (amazing sports character name), a former college football star who didn’t play in the pros after a disastrous Bowl Game crushed his confidence. He now scrapes crap off people’s boats and runs underwater formations in scuba gear while set to Lit music (not a bad life). Falco gets a second chance as a scab/replacement player when the professionals go on strike and he takes the reigns of the Washington Sentinels offense as their new Quarterback. He’s a natural leader, but suffers from confidence issues that hold him back from being a winner. I love Keanu Reeves. He’s so likeable on and off-screen. His victories are our victories. 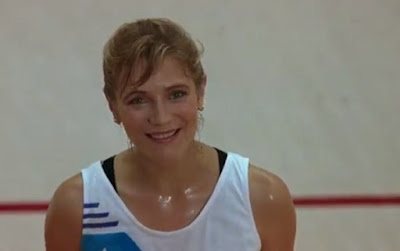 • Harley Jane Kozak plays Dr. Suzanne Carter, a journalism professor and secret fangirl of Paul Blake, which is a little bit sad. She and Blake hook up, which is fucking hot (Blake is all about passing grades, on and off the field) and I had a big Harley Jane Kozak crush when I was nine, which I’m not sure even I can explain. It’s not the most complex role, but Kozak is pleasant so I’m mostly onboard. Plus, Harley Jane Kozak is so much not a movie star name that it became my favorite movie star name. Like Sarah Snook. That’s the name of a girl you meet in middle school, not one you put on a poster.

• Brooke Langton (of Swingers fame) plays Annabelle Farrell, dive bar owner and head cheerleader for the Sentinels. After a timid courtship with Falco, she and he hook up thanks to a truly awful scene where John Madden and Pat Summerall give a play-by-play like it’s a football game. Reeves and Langton have zero chemistry other than both being attractive and available. Langton is pleasant, but leaves little impression on me.

Necessary Roughness (limited to five for my sanity)

• Sinbad is Andre Krimm, another old guy who returns to college football. He’s also a science professor. The movie doesn’t take full advantage of having Sinbad in it, which is a borderline felony.

• Jason Bateman is a rich kid named Jarvis Edison, who is in the football scenes although I don’t remember seeing him in any of the plays. It’s weird. This is Bateman-lite. Get your fix elsewhere.

• Peter Navy Tuiasosopo plays the center, Manumana. He seems like a real friendly guy despite his intimidating size. Tuiasosopo was also in Street Fighter, so bonus points.

• Kathy Ireland is the kicker, Lucy Draper. She’s mostly around for guys to get excited that she’s in their locker room taking a shower or being protected by Manumana to such a degree that I’m worried he’s going to turn Colossal on her at any moment. They don’t do a whole lot with her character other than point out she’s pretty and can kick well.

• Louis Mandylor is McKenzie, an Australian (?) dude whose gimmick is he likes to practice without a helmet and pads because he’s macho. He does not bring the same magic here that he did to My Big Fat Greek Wedding. I wish I watched that again instead of Necessary Roughness.

The Replacements (limited to five for my sanity) 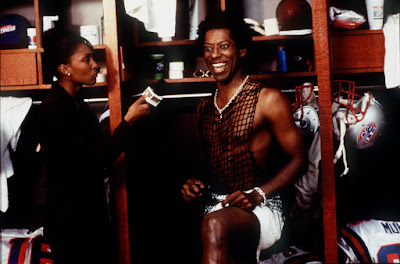 • Jon Favreau plays the most annoying character in either of these films: a nutcase who just screams and tackles people or smirks to the camera like an asshole. I like Favreau most of the time, but this is not one of those times. Happy Hogan sucks, too. Sorry for that quick vent.

• Rhys Ifans plays Nigel Gruff, the kicker and anti-Christ. He’s so not funny in this movie but I know I’m supposed to think he’s hilarious because a) he gambles, drinks and smokes b) he’s a perv c) he’s Welsh and d) he doesn’t look like a football player. Ugh! How in the hell was Ifans engaged to Sienna Miller in real life? That is one of Earth’s greatest mysteries.

• David Denman (Roy from The Office) plays a deaf Tight End named Brian Murphy. He would have been drafted if not for his disability. He catches the final pass to win the big game at the end of the movie and it’s insinuated he gets a BJ from a very cute cheerleader, so good for him.

• Ace Yonamine is Fumiko, a sumo wrestler and now Offensive Lineman. He eats a bunch of boiled eggs and throws them up on-field. He also gets into a bunch of jokey-racist fights with Faizon Love’s character (another lineman) that are supposed to be hilarious. None of it works. Blech. 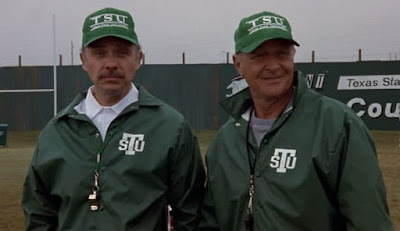 • Hector Elizondo is Head Coach/Offensive Coordinator Ed “Straight Arrow” Gennero. I like Elizondo, but he’s written as a real wet blanket in this movie.

• Robert Loggia is Coach Wally Rig, the vulgar Defensive Coordinator. This is peak Loggia in all its grouchy, gruff glory. Loggia is by far my favorite part of Necessary Roughness.

• Gene Hackman plays Head Coach Jimmy McGinty in a performance that is the textbook example of a paycheck performance. This should have been an easy victory for The Replacements, but alas, it is a defeat. There are also two assistant coaches played by Art LaFleur (from Man of the House [1995]!) and Gailard Sartain (of Ernest movies fame) but they are given nothing to do. 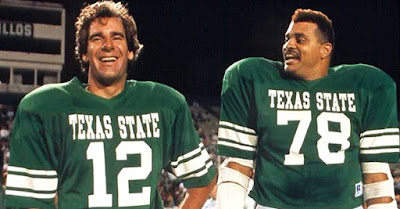 Have a recommendation for a future scorecard? Leave a comment below ☺

Next time, I’ll celebrate The Wedding Singer’s 20th anniversary by pitting it against another Adam Sandler-Drew Barrymore romantic comedy, 50 First Dates.
Posted by Patrick Bromley at 5:00 AM